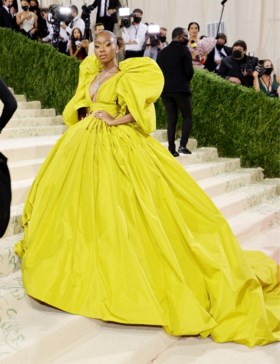 After two years of absence due to Covid, the extravagant Met Gala is back in New York. The opportunity to discover the most extravagant looks.

Four hundred actors, actresses, musicians, models, sportswomen or stars of social networks in ever more extravagant outfits hurried Monday evening to the gala of the Metropolitan Museum of Art (Met), the unmissable ultra-social event of all- New York, after two and a half years of absence due to the pandemic.

Almost no one was masked, but to strut the cream-colored carpet, to show up at one of the most popular parties on the planet, you still had to be vaccinated or test negative.

“It’s unreal!” exclaimed the American rapper Megan Thee Stallion, while finding “a little strange” to meet with so many “peoples” in the most select evening of the city-world which is just recovering from the pandemic.

In an incredible yellow dress cut by Valentino, the American singer and dancer Normani, very moved in front of the forest of microphones and cameras, felt like a “princess, a black queen”.

What is the MET?

The Met Gala is a charity event held annually for the benefit of the Costume Institute, a museum entity dedicated to fashion, which has its own budget and is financially independent from the Met.

Created in 1948, the gala was for a long time an event reserved for the very high and very wealthy New York society, the main source of patronage for the Met. It gradually opened up from the 1970s, before transforming itself after the arrival at its head of the high priestess of fashion and editor-in-chief of Vogue, Anna Wintour, in 1995.

She propelled it into the galaxy of “people” events, adapted to the era of social networks and the democratization of fashion, to the point where it is sometimes compared to the Oscars ceremony in Los Angeles.

The 2020 edition of the gala had been canceled as New York was suffocated by the coronavirus epidemic. That of this year, which is usually held on the first Monday in May, has been postponed to this Monday evening, before a 2022 edition scheduled for the beginning of May. Perhaps with some 1,200 guests, as before the pandemic.

The Met Gala, the occasion for great fashion designers to dress the stars, also marks the opening of the Costume Institute’s annual exhibition.

The museum has chosen this year to organize an exhibition in two parts, the first from Saturday, September 18 to September 2022 and the second starting in May 2022.