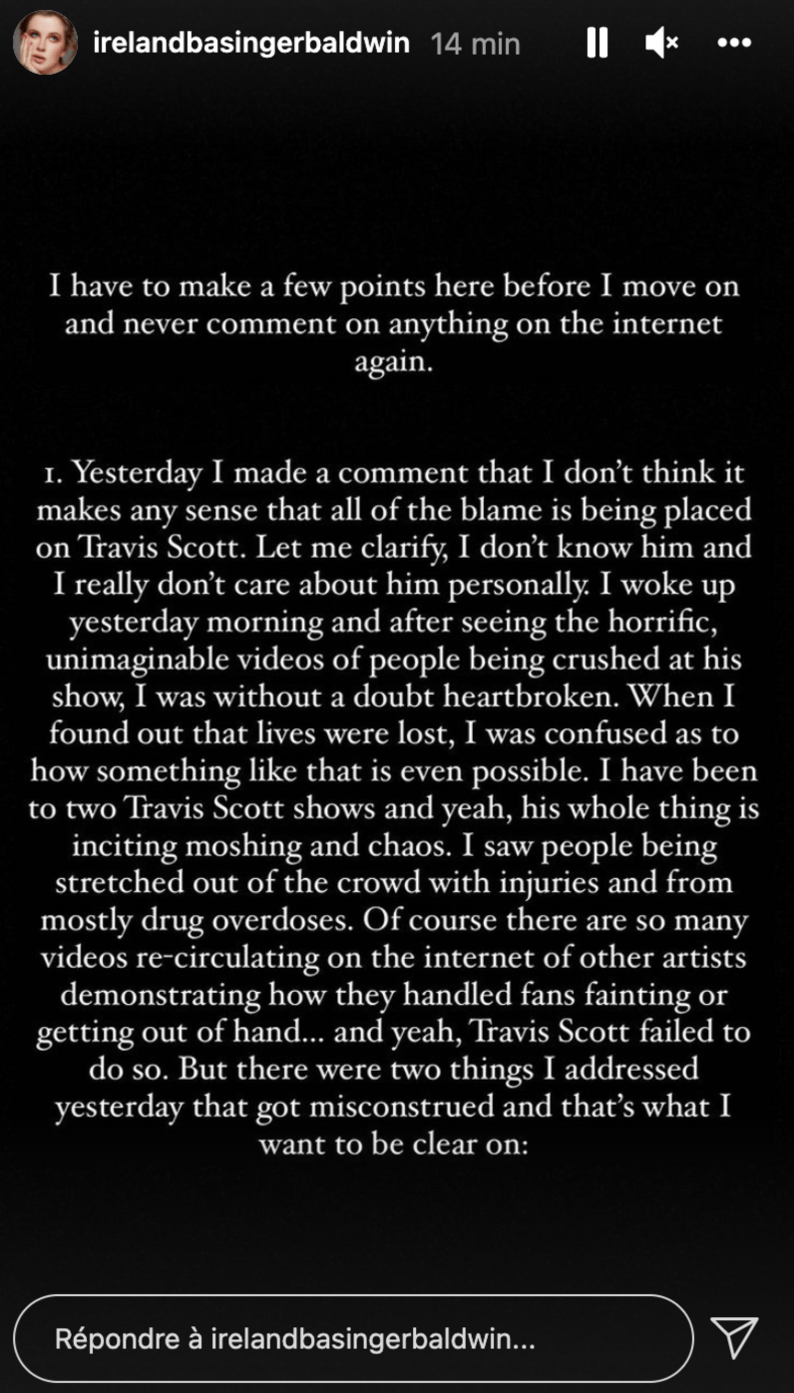 On Sunday November 7, Ireland Baldwin took to Instagram to defend Travis Scott. Alec Baldwin’s daughter made the connection with what she could read about her dad at the time of the accident which claimed the life of Halyna Hutchins.

On Sunday November 7, Alec Baldwin’s daughter spoke on Instagram in a series of posts, in order to dot the i’s. It must be said that since October 21, Internet users have continued to give their opinion on the drama experienced by his dad. As a reminder, the actor accidentally shot Halyna Hutchins with a weapon he thought was fake, on the set of the film Rust in New Mexico.

A few days ago, she therefore took the floor to talk about the surge of hatred suffered by her family since this tragic incident. Kim Basinger’s daughter made the connection with the treatment of Travis Scott. On the night of Friday November 5 to Saturday November 6, eight people lost their lives during a concert he was giving in Houston, Texas.

In a series of posts, since deleted, Alec Baldwin’s daughter pushed a violent rant against everything she has read on social networks. “You believe everything you see on social media and spread false information. First of all, you were all gun experts when it came to talking about the horrible tragedy that involved my father“, she said. And to add: “Now Travis Scott is a monster because he ALLOWED people to die at his concert?”, she rebelled. “I’ll start by saying I’m devastated for the families who have lost someone. But it’s not Travis’s fault. Let’s see, do your research before you spread shit. People lost their children during the concert, and all you can say is Travis Scott’s music is demonic and that he should end up in prison? My God…”, she continued.

Alec Baldwin’s daughter wants to educate Internet users and for her, this must mean stopping “spread false information”. In a third post, the young woman specifies that she does not defend Travis Scott, because she “does not know him personally”, although she has attended two of his concerts in the past. “And yes, I saw people being trampled during his concerts”, she wanted to qualify. This Monday, November 8, Alec Baldwin’s daughter wanted to make a “last” update on his words the day before via ses Stories Instagram. “I need to clarify some things before I move on. I saw videos circulating on TikTok that said that Travis Scott would have planned everything in advance and that he would be a Satanist. Are you kinding me ? What I read put me beside myself because I experienced this misinformation about my father. I make no parallel between these two tragedies. Coming back to Travis Scott, I think no one can imagine what it’s like to be on stage. You don’t see anything “, she added. Point final.