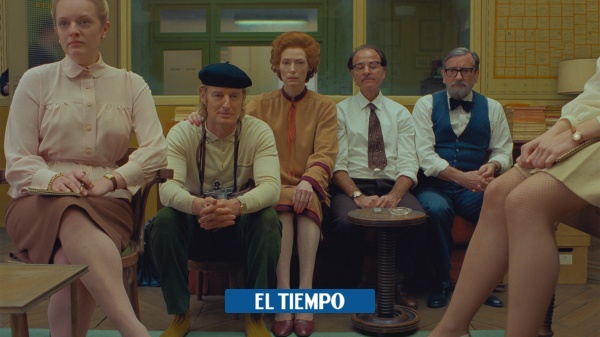 The friendship between the actor Owen Wilson and director Wes Anderson is indissoluble. When Wes has a project in mind – in which there is surely a character thought of Owen – he tells it to the actor, who ends up being part of the casting without hesitation. They have worked together since the short that meant Anderson’s debut, Bottle Rocket, which would later become a feature length. And they have not stopped.

“Not that Wes has a deference to warn me of a role, ”says Wilson. He sends me an email telling me about the character and his first sketches. It’s as simple as that”.

(We recommend: Saviano finishes the series ‘Gomorra’, a universal portrait of the mafia)

Their most recent work together is ‘The French Dispatch’, which blew away many critics at the Cannes Film Festival. In a tone of comedy and romance, Wes Anderson makes his declaration of love to the world of journalism through three stories that are connected in an American newspaper that works in a fictional city in France.

Wilson interpreta a Herb-saint Sazerac, a reporter of the newspaper magazine, which from his bicycle is in charge of presenting the viewer with the city where the film is set: the nonexistent but fantastic Ennui-sur-Blasé. Sazerac prides himself on being the official chronicler of the place, favoring stories that explore its sordid underworld and its rugged daily life.

Another figure in the cast is Adrien Brody (center), who plays Julien Cadazio, an art dealer.

From the hand of Anderson, the 52-year-old American actor has explored all genres and especially the fantasy that the director always impresses in his films: ‘The eccentric Tenenbaum’, ‘Life in the water with Steve Zissou’, ‘Journey to Darjeeling’, ‘Fantastic Mr . Fox ‘and’ The Great Budapest Hotel ‘are part of his credits.

In this interview, on loan from the studio, he reflects on his relationship with the director and his love for the unique style that has made him world famous.

How did you meet Wes Anderson?
We attended a playwriting course in Austin at the University of Texas and were in the same class the entire semester. There would not be more than 15 students, but we did not see each other there. There was a table around which we all sat. I used to push my chair away and lean back a bit against a window because I liked to look outside. And Wes did the same. Anyone would think that would lay the groundwork for a connection, but it was more like, ‘Who does this guy think he is? Why don’t you stay there with the rest of the group? ‘

We met in the following semester. I ran into him in a hallway, and had to ask him about how to sign up for a class. And then my roommate from military school became his friend from Houston. One day when Wes came to visit my friend, I realized, “Oh, that’s the guy who was in playwriting class, and he’s the same guy I came across in the hallway.” And there we became friends. It’s crazy, because we’re in our 50s now, and if you ask me to take my mind back to those moments, it’s easy for me because I remember them clearly. However, something from the past week may seem much more distant to me. Your relationship with time becomes a bit surreal.

During the filming of ‘The French Chronicle’, everyone was staying in the same place, breathing in the world of the film. What did that add to the experience?
That’s how Wes likes it. I was talking to one of my co-stars, who was working with him for the first time, and it really is a very unusual way to make a movie.
Although many more people should do it this way because it is a comfortable way, in which we are all staying in the same place, and we have dinner together at night, and in the next room they are editing, and Wes is upstairs. You just walk up and see what happens.

We are together, there is not so much hairstyle, makeup and wardrobe. You do that one time in the morning and that’s it. I think after ‘Life Aquatic’ Wes really wanted to keep things in a certain range. The way he conducts gives you careful support, and it’s not a way that requires a lot of takes, certainly not in terms of interpretation. Sometimes camera movements are enough. It’s more like in sports, where everyone has their shot and must hit it, and if they don’t, they have to do it again. That raises the bar for everyone because you don’t want to be the guy to fail.

Have you read some of the writers the movie is based on?
Wes said my character was slightly inspired by Bill Cunningham from ‘The New York Times’. But that was it, and I didn’t really do a preparation for my character. I have cycled many cities. And if there was an actor probably ready to play a bicycle reporter, I think that was me (laughs).

What attracts you the most about this story?
I’m usually uncomfortable watching myself on screen, and I don’t like watching movies I’m starring in, but I saw this one once and will definitely watch it again. I know I want to live in one of these stories. I don’t know which one I would choose. I love the first one. I guess the one my character is on. But each has something poignant about it.

‘Perfumes’: the movie you have to smell

‘I thought they hadn’t chosen me’: Carolina Gaitán on ‘Encanto’

Owen Wilson and the mania of journalism riding a bicycle