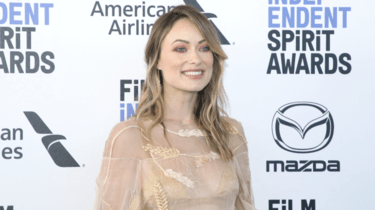 American actress and director Olivia Wilde received a mysterious envelope on stage in Las Vegas, while she was presenting her next film.

“It’s for me, right?” asked the actress, interrupted as she unveiled images from her next thriller “Don’t Worry Darling” at CinemaCon on Tuesday.

“Very mysterious. I will open it now,” she added. The envelope, which was marked “personal and confidential”, had been calmly slipped onto the scene by an unknown person. “Is it a script? OK, understood. Thank you”, she then simply said, glancing at the contents of the envelope.

She then resumed her presentation without a hitch, without any reference to this envelope. The public present who had first believed in a scripted sequence then thought that the person who had slipped the missive had taken advantage of his presence to submit to him.

But it emerged on Wednesday that this envelope actually contained legal documents relating to the two children she had with her former partner Jason Sudeikis, star of the television comedy “Ted Lasso”. “Papers have been prepared to establish jurisdiction over the children of Ms. Wilde and Mr. Sudeikis,” a source close to Jason Sudeikis told AFP on Wednesday.

“Mr. Sudeikis had no knowledge of where and when this envelope would be delivered because that was the sole responsibility of the company involved and he would never have tolerated her being delivered the documents in such an inappropriate manner,” according to this source.

“Don’t Worry Darling” is a psychological thriller inspired by the “Truman Show” and “Inception” in which plays British singer and actor Harry Styles, the current boyfriend of Olivia Wilde.

At the start of 2020, the 36-year-old actress separated from her husband Jason Sudeikis, with whom she lived for eight years and had two children: Otis Alexander, 7, and Daisy Josephine, 5. .

They had met in 2011 on the set of Saturday Night Live. In 2013, the actress explained that the comedian had been so charming during their first meeting that he had not dared to ask for her phone number. “The following six months, we did not stop crossing paths. One evening, my best friend went to see him and said, ‘Here is Olivia’s number. Use it’. And it started like that”, she explains to the American site Allure.

“The separation was amicable and they were able to work out an effective shared custody arrangement. Children are the priority and at the heart of their family life,” a source close to the couple told People.

Olivia Wilde: the actress receives the papers of her divorce in full presentation on stage