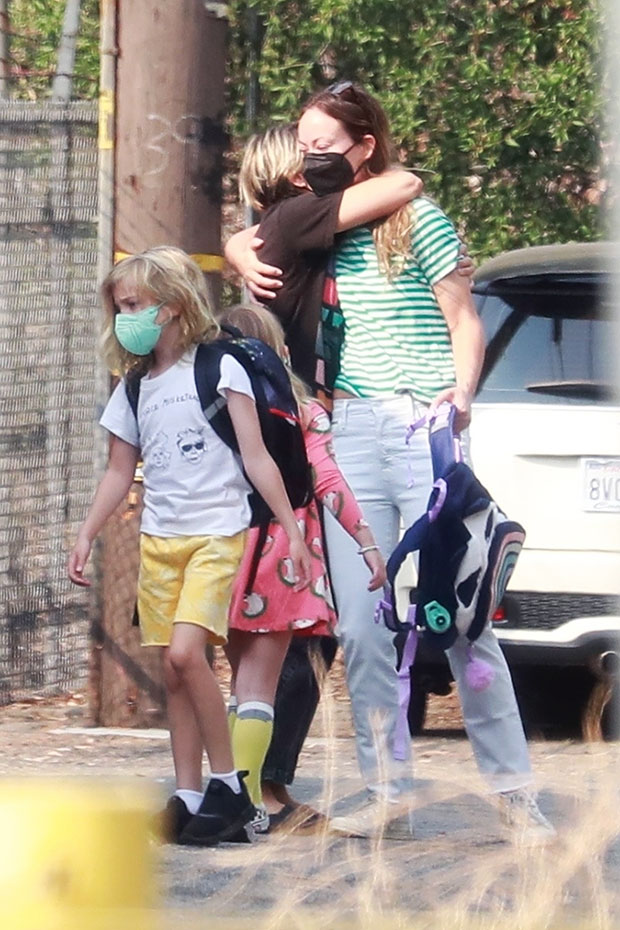 Olivia Wilde was spotted dropping off her kids at their Los Angeles school as she wore a classy outfit and showed their connection by helping them locate themselves before she left.

Olivia Wilde, 37, looked like a beloved mom on her last outing with her kids. The actress was pictured dropping off her daughter Marguerite, 4 years old and son Otis, 7 years old, whom she shares with her ex Jason Sudeikis, 45, at their school in Los Angeles, Calif., In the morning. She was wearing a green and white striped t-shirt with white pants and white sneakers and sunglasses were placed on her head.

She also stayed safe while wearing a black face mask and had her long locks closed and parted in the middle. Otis wore a white t-shirt, yellow shorts and black sneakers and also added a green mask while Daisy wore a cute pink dress, gray and yellow patterned socks with black and white checkered slip-ons and her own green mask. Olivia was seen kissing an adult who was also standing in the neighborhood before leaving school.

Last return to school for Olivia and her children comes after she hit the headlines for taking a romantic walk with her boyfriend Harry Styles, 27. The lovebirds were going to have lunch in Los Angeles on August 8 and were quick to show their affection for each other as they walked. They had their arms around each other most of the time and were all smiling.

Before that, they were seen vacationing together in Tuscany, Italy and also packed on a PDA. They hooked up while walking through town on June 30 and seemed inseparable. Fans took photos as they casually walked past them and they looked like any other couple in love!

Olivia and Harry first confirmed their romance when they were spotted holding hands at a wedding in January. While neither of them have spoken publicly about their relationship, they certainly aren’t trying to hide it! Their love blossomed when they worked together on Olivia’s upcoming film, Don’t worry darling, which she directed and in which Harry starred.