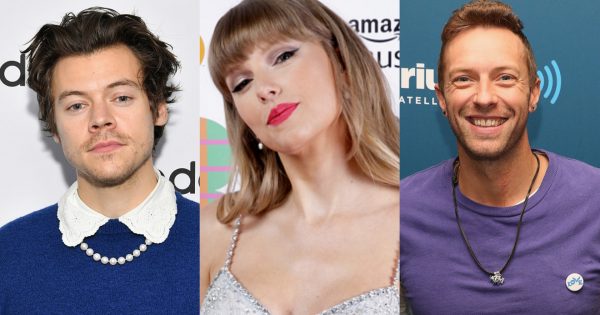 Coldplay finally released their new album, Music of the Spheres, and it seems to be one of his most romantic. And is that Much of the songs written by Chris Martin are inspired by someone special: Dakota Johnson.

After all, the couple has been together for a while and they see each other more and more in love. However, away from the media and social networks, Chris Martin prefers to show his love and appreciation for Dakota Johnson through music.

Pbut Chris Martin is not the first nor the last. And there is a long list of favorite couples in Hollywood that merge two of our favorite things: Music and cinema. A) Yes, In this following list, we tell you some of these movie romances that have become favorites of many.

Although they seem to be a more private couple, that does not mean that their relationship is weaker than others. And it is that the leader of Coldplay, Chris Martin, seems to be serious with the successful actress Dakota Johnson. After all, it was recently reported that they bought a luxurious mansion to live together.

The couple met in 2017, after Martin ended other public relationships with Jennifer Lawrence and Annabele Wallis. It was thanks to mutual friends that they got to know and connect. Since then, They seem to be completely in love with each other, with tattoos in common to celebrate their love.

Carey Mulligan and Marcus Mumford has one of the most beautiful stories of the couples between musicians and actors. And it is that these were companions in a church camp. Thus, they met when they were just children but lost contact over the years.

However, in 2011 they reunited after the actress went to one of the Mumford & Sons concerts. Since then, they began to reconnect and reached new levels of closeness. It only took a year for them to put the marriage mark on their tender love story.

After years of bad luck in love, Looks Like Taylor Swift Finally Found Her Prince Charming In English Actor, Joe Alwyn. The couple began dating in 2016, after meeting at the popular Met Gala that same year. Although few details are known, it appears to be an advanced and stable relationship.

Alwyn must be a source of inspiration for her. And is that since their relationship, Taylor Swift has released three studio albums. What’s more, the actor has collaborated in the composition of some of these songs, under a pseudonym to hide his identity.

The truth is that, despite being a successful musician, Harry Styles is also an emerging actor, who has already debuted alongside Christopher Nolan. After all, This is how the former One Direction met his current partner, acclaimed actress and director, Olivia Wilde.

Olivia Wilde directed Harry Styles in his new movie, Don’t Worry Darling, which will be released in 2022. Since then, they have gone on vacation together and the director accompanies him to concerts, where he is seen singing and dancing.

Joanna Newsom and Andy Samberg’s relationship must be one of the most surprising and curious among musicians and actors. And the actor is known for an outgoing personality that can be seen in his comic films. However, Newsom keeps a low profile and expresses his personality and creativity through his acclaimed and outrageous music.

But their relationship is perhaps the perfect example that opposites attract. The two met after being fans of each other’s work for years. After going to see her at a concert, Samberg approached him without imagining that this admiration would morph into a strong relationship.

Although they are both low-key, Mark Foster and Julia Garner’s relationship is a favorite of many. The actress Emmy winner for Ozark She officially married the frontman of Foster The People in 2019, after a short time of relationship.

The musician has accompanied her in the successful career of the young actress. In fact, When she won the Emmy for Supporting Drama Actress, Foster was seen happy and celebrating his wife’s award.

Margaret Qualley recently became the favorite of many after the premiere of the acclaimed series Things to Clean. But the actress has her attention on one of the most famous names of recent times in pop music.

The young interpreter has been dating for a few months Jack Antonoff, leader of bands like Bleachers and Fun. In addition, he is known for being the producer behind artists like Lana Del Rey, Lorde, Taylor Swift, Clairo, The Chicks, Bruce Springsteen, among others.

In 2018, music and film fans were shocked when the marriage between actress Daryl Hannah and Neil Young was announced. For four years, the relationship between the two was speculated, but it was not confirmed until it was known of his marriage.

And it is perhaps one of the most striking couples between musicians and actors. Despite 15 years apart, Hannah and Young seem to have a strong relationship, showing on multiple occasions the mutual love they feel for each other.