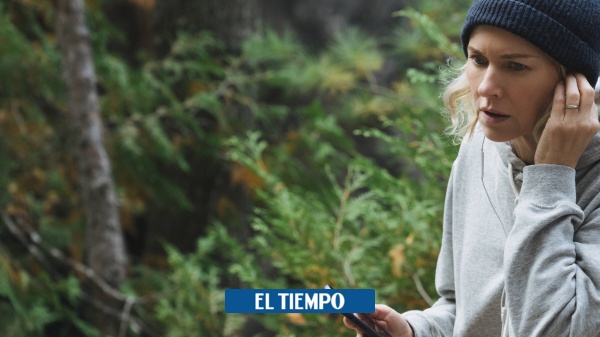 A camera follows him Naomi Watts. Run frantically. A shooter stalks the school where his teenage son studies. She has just become a widower and tries to rebuild her life next to her children; however, a change in her daily routine – that morning she decides to go for a jog in the woods, miles away from her house – turns into a nightmare when she begins to receive fragmented details of what is happening. . ‘Amy Carr’ (Watss) will do the impossible to save her son. Desperate (Lakewood, in its original title) are 110 minutes of adrenaline.

The Australian director Phillip Noyce (Sliver, Patriot Games) is behind the film that is in theaters in the country and that drinks part of its essence from some of the remembered massacres that have taken place in American schools, such as Columbine -in 1999 and that left 15 dead (including the two perpetrators) – or at Virginia Tech University, where one of the students killed 32 people in April 2007.

(Also: The first gay kiss in Pixar history will be seen in ‘Lightyear.’)

Watts -remembered for 21 grams, ‘The Impossible’, ‘Mulholland Drive’ and ‘Birdman’, among other productions- accepted the character after many years of discussing the story with Noyce. It was complex, emotionally because she is a mother and she lives in fear that her children will experience a similar event, and physically because despite her tremendous physical condition, she had to run in all the scenes.

Why am I accepting this role?
​
Because I am a mom. I live with that fear when I read in the newspaper that a situation like this occurs. It is a torment. There are times when I send my children to school and suddenly horrible thoughts come to me.. And that’s part of being a mother.

When we leave them in the crib, we think: Are they going to fall? Will they be able to breathe well? Will they fall down the stairs if they go to a friend’s house? When they cross the street… Anyway, there are all kinds of fears you live with when you become a mom.

Unfortunately, it doesn’t make sense. But it has also become one more fear, that going to school – such an innocent place – is, or could be, a vulnerable place.

What did he do to get ready to run throughout the movie?

I have been a runner. I used to run a lot in my twenties and thirties, but I began to have back injuries, a recurring one, so it was not good to continue doing high-impact sports. But with that said, I come from a pretty athletic background. And I’ve adapted to different things. I enjoy sports and exercise. It’s good for your endorphins as well as your physical appearance.

And, uh, when I decided I was going to do this movie I started a running training program and it’s amazing what memory muscles have. I managed to get in shape thinking that we were going to record in short sequences but once we started, Phillip liked to record in very long takes that seemed never ending. And repeat them. So I also found myself physically evolving as the shoot progressed.

Yes. Although we had talked about it and wanted to do it for a long time. And you know, Australia is a big country, but, it’s a small industry. And we all know each other at some point. And yes, I have always adored him. So definitely, when the idea came to me, I was like, ‘That’s great, I love it.’

It was at the beginning of covid and the pandemic and it was early to return to a set and I thought I would be in safe hands with someone as learned in cinematography as he is.

You were completely alone, in the middle of the forest, shooting the scenes… how was that experience?

I was ready for it. It was challenging and exciting at the same time because it was a new challenge. She was not completely alone. I had my phone with two actors on the other end of the line, who contributed tremendously. I mean they were really there with me. She would pass me by thanking them at the end of each take. They had to be agile, and be prepared for anything unexpected. We had to be very coordinated. Sometimes we would lose signal and I couldn’t hear them, so I had to keep going on my own.

(Also: Anthony Hopkins surprises again with his salsa steps at the Oscars).

Were they really not reading the lines while you were on camera?

No. They were stuck in a truck somewhere in the woods. Yeah, because they couldn’t be close, we were covering such a huge space that if they were seen in the scene, running next to me, it wouldn’t have worked. The filming technique used a new type of camera that allowed for huge, fantastic shots with incredible detail. But that meant my co-stars were as close to me as possible.

Is there a metaphor with the story in running all the time?

Chaos swirls around Amy’s mind. And from anyone if she got that call. Maybe they’re not lost in a forest with no vehicles or anything. But just in the course of your day thinking ‘how did this happen’, ‘what can I do to fix it’. In addition to a spiral of emotions going through panic, fear and helplessness. And suddenly at times finding your power and then feeling that your stability is stolen. Pure chaos around you. So I guess running certainly helped me because physical exhaustion prevents you from being in your head and you just have to concentrate. And I think that would happen to someone who gets that news, they just lose control of everything. And, physical exhaustion helped address that.

He faces many obstacles: the distance, the inability to contact people. And suddenly there is a twist in which everything changes. Can we talk about what Amy finds out about herself and her family?

She discovers she becomes incredibly motherly in her determination. And I imagine that a mother in this situation could do the same. Whether or not it happened.

I mean, you hear of mothers lifting cars off their kids’ legs or things like that. And it’s just that strength that comes out of you that is deeply maternal. And there’s also that deep level of understanding that maybe he missed some moments, and important moments with her son. And that perhaps he should have put aside his own mourning to be more aware of her son’s mourning and help him.

Because obviously he lost his father, it wasn’t just that she lost her husband. She he she lost her father. And it was maybe at that precise moment that she didn’t know how to help. Through this crisis she realizes that she has overlooked some things.

‘Desperate’ was shot during the pandemic.

In Desperate, she returns to act in a film written by Chris Sparling -author of Sea of ​​Trees that Naomi Watts starred in in 2015, under the direction of Gus Van Sant-. What do you like about her scripts?

The tension, the fantastic characters full of nuances. It’s, you know… In both cases, ordinary women going through something extraordinary. And that is always something attractive to hook an audience and an actor. I also really liked the movie that she wrote, Buried, which is kind of similar, in that she’s a person in a very limiting situation. And, yeah, I think this story felt completely compelling, meaningful, it speaks to a crisis that we’re living through, over and over again, and it’s something that shouldn’t be happening. It’s devastating.

CULTURE
*With an interview provided by Cine Colombia
@CultureET

Sebastián Yatra: the emotional reaction of the artist after singing at the Oscars

Naomi Watts in ‘Desperate’: ‘I feel panic, fear and helplessness’