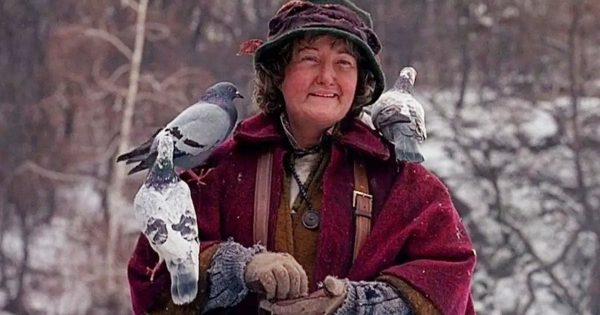 Without a doubt, one of the most watched movies in the Christmas time is the saga of My Poor Little Angel. Which despite having been released in the early 1990s, continues to delight millions of fans. However, one of the most iconic characters in the franchise was the so-called ‘Lady of the Doves’, played by a actress that perhaps many are unaware of.

There is no doubt that the ‘Lady of the Doves’ was one of the characters that most moved the fans in Mi Pobre Angelito 2. Although for many at first glance it could be a woman dirty, bitter and extremely lonely, deep down he hid a big heart and saved Kevin from dying.

On that occasion, the Irish actress Brenda Fricker revealed how talented she was. Even in 1989 had won the Oscar Award for Best Supporting Actress after playing Mrs. Brown in My Left Foot.

And the truth is that the actress has a great trajectory in Ireland, the United Kingdom and the United States. However, after participating in the film Crossmaglen, he retired from acting in 2008.

What became of Brenda Fricker, the ‘Lady of the Doves’?

In an interview with The Independent, Brenda Fricker revealed that I was no longer interested in making more movies. «There are very few actors and screenwriters with whom I would make the exception But I’m basically retired I miss the moment between the words ‘action’ and ‘cut’, when you could really act, but movies have turned into a circus nowadays“, He said.

Sadly, he spoke in 2020 about a difficult situation he was going through, noting that I would spend Christmas of that year in complete solitude, like the ‘Lady of the Doves’ from My Poor Little Angel 2.

“I would be lying if I said it would be a nice and happy Christmas because I am older and I live alone. Everything can be very dark. Simply I turn off the phone and draw the blinds. I pre-shoot some good shows, I have my dog ​​and I get over it that way. I don’t want to sound negative, but this is a different christmas, that’s it, ”he said at the time.

It should be noted that the actress has had a very complicated life. In an interview with Daily Mail, he confessed to having battled with depression, ensuring that tried to kill himself 32 times. Likewise, it is known that in 2009 he suffered a domestic accident, falling down and causing the loss of vision in one eye along with a scar.

My Poor Little Angel: The sad present of Brenda Fricker, ‘the lady of the doves’