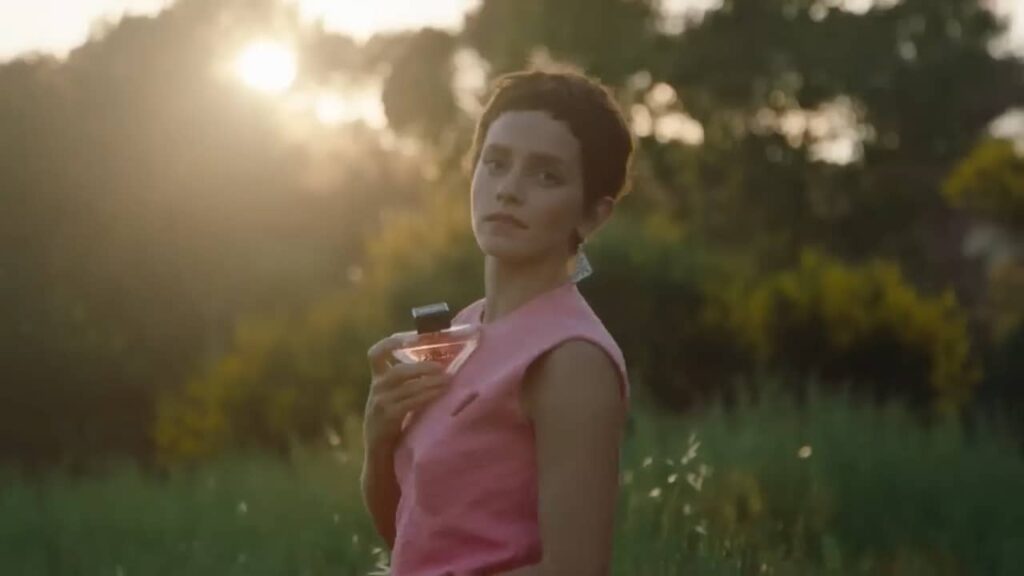 Prada unveils its new feminine elixir: the Paradoxe perfume. On a pub music signed by the group London Grammar and entitled “Lord It’s a Feeling”, the Italian brand pays tribute to women who dare to be different while remaining themselves.

The advertising campaign for the new eau de parfum for women Prada begins by showing the legs of a woman. The latter advances slowly and stops in front of a wall of screens. On each of them, we discover several facets of her femininity. The young woman plunges into one of them. We see a woman sitting in the lotus position meditating. It is surrounded by greenery and seems peaceful. The ad continues with the young woman in full activity, painting a wall. She is then seen performing dance steps.

Prada’s “Paradox” commercial continues with the young woman then diving. We discover it later in a rebellious look. Dark lipstick, nose and lip piercings, the young woman reveals another face of her personality. In a choreography in perfect symbiosis with the music of the pub, she runs down the stairs. The ad ends in the middle of nature. The beautiful young woman is lying on a platform overlooking the trees and she presents us with the bottle of the new Prada perfume.

What is the music of Prada’s Paradoxe ad?

To introduce us to his brand new perfume for womenPrada chose a song from the group London Grammar. This is the song “Lord it’s a Feeling” taken from the pop rock album “California Soil” released in 2021. This is a committed song that denounces the excesses of sexism.

London Grammar is an indie pop and electro music group from England. It is made up of three members. First we find the singer Hannah Reid who also plays the piano. Then there is Dominic “Dot” Major and Daniel Rothman. The latter two play the keyboard and percussion respectively. The group was formed in 2009. Hannah and Dan met in college before starting a music career together. They are later joined by Dominic. They released their first album in 2013 after becoming known on YouTube. The latter will be certified Gold Disc in Australia and Platinum Disc in England and France.

Who is the model in Prada’s Paradox ad?

To introduce us to its new fragrance, which celebrates femininity in all its diversity, Prada has chosen Emma Watson as an ambassador. The new face of the brand is a strong symbol. Indeed, today she represents the face of the strong, independent, plural woman who does not allow herself to be placed in a box. The young actress has been an ambassador for the UN Women for several years. She campaigns for women’s rights, but also to create a new generation of women. In this commercial, Emma Watson played both the role of muse and director.

Emma Watson is an English actress born in Paris. She made herself known on the international scene by playing the role ofHermione Granger in the harry potter saga. In her ten years as the most gifted Muggle witch at Hogwarts, Emma Watson grew up in the spotlight. She won several accolades for her performance, before turning to more “adult” roles. It is thus found in several productions, among which The beauty and the Beast, Charlie’s world, The Circle, My Week With Marylin, The Daughters of Doctor March or Regression.

To pay tribute to women, Prada signs its new perfume with an evocative name: Paradox. After the perfume for men Luna Rossa which honored these gentlemen, it is the turn of the ladies to be valued with Paradoxe. This elixir with floral and citrus notes that leaves a fruity and musky touch reveals several facets of femininity. It reveals top notes of pear, bergamot, tangerine, orange blossom, sambac jasmine, neroli, white musk, benzoin, amber and bourbon vanilla. The perfume creates a pleasant olfactory cacophony that leaves a cloud of great intensity in its wake. Paradox was designed to create confusion, arouse curiosity, awaken desire and leave a thousand questions about the woman who wears it.