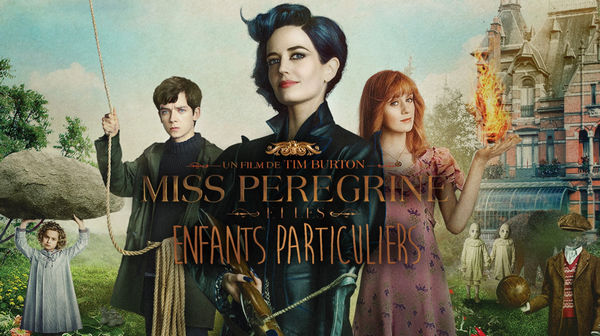 On the occasion of Halloween, M6 offers viewers on this Sunday, October 31 a special evening with two films by Tim Burton: “Miss Peregrine and the special children” (unpublished) followed by “Dark Shadows”. Two family stories, where magic and comedy blend together for the happiness of young and old.

“Miss Peregrine and the special children”

Upon the death of his grandfather, Jacob discovers the clues and the existence of a mysterious world which leads him to a magical place: the House of Miss Peregrine for Children Particular. But the mystery and the danger intensify when he gets to know the residents, their strange powers… and their powerful enemies. Eventually, Jacob discovers that only his own “quirk” can save his new friends.

✫ “Miss Peregrine and the Peculiar Children” is taken from Ransom Riggs’ debut novel, published in 2011. The book was an instant hit and reached # 1 on the New York Times bestseller list, in which it remained classified for years. It has sold over 3.1 million copies.

✫ The film was shot in Florida, Belgium and the UK. For the film’s main residence, the production has found a castle located in Torenhof near Antwerp in Belgium. It originally belonged to a famous cookie maker. Tim Burton loved its structure and thought the character of the place was perfect to represent the Maison des Particuliers.

✫ Great success for the film with the French, it recorded 2.6 million admissions.

Better than pictures of words with the official trailer of

In 1752 Joshua and Naomi Collins left Liverpool, England, to sail with their young son, Barnabas, and start a new life in America. But even an ocean fails to keep them away from the terrible curse that has befallen their families. Twenty years go by and Barnabas has the world at his feet, or at least the town of Collinsport, Maine. Rich and powerful, he is an inveterate seducer… until he made the grave mistake of breaking Angélique Bouchard’s heart.

She’s a witch, in every sense of the word, who casts a spell far more evil than death: that of being turned into a vampire and buried alive. Two centuries later, Barnabas was inadvertently freed from his grave and arrived in 1972 in a totally transformed world …

✫The film Dark Shadows is an adaptation of the eponymous series, broadcast between 1966 and 1971 on the American channel ABC. For 1,225 episodes, viewers were able to follow the adventures of the Collins family in this fantastic soap opera.

✫ Dark Shadows is director Tim Burton’s eighth collaboration with his favorite actor Johnny Depp.
In order to realistically film a ghost, actress Bella Heathcote was immersed in a water tank to feature the spectral appearances of her character, Josette DuPres.

✫ Then it was enough to erase the water by computer and obtain a ghostly vision that seems to levitate in the air.
Rumors about the sequel to Beetlejuice released in 1988 are being heard. Tim Burton and Mickael Keaton would be excited to gift a Beetlejuice 2.

“Miss Peregrine and the special children”, and “Dark Shadows” two films to savor this Sunday evening from 21.05 on M6. Have a good movie night everyone.

“Miss Peregrine and the special children”, a new film with Eva Green, this Sunday, October 31 on M6