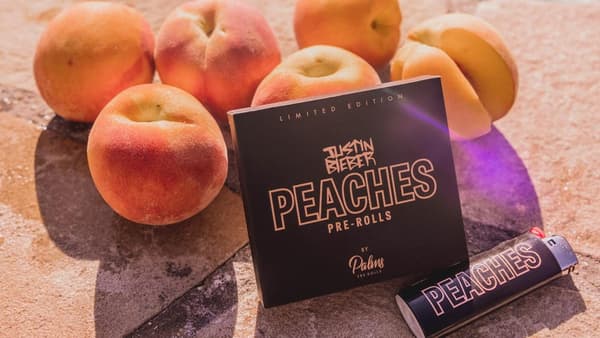 After wine (Sarah Jessica Parker, Brad Pitt and Angelina Jolie) or cosmetics (Rihanna, Selena Gomez …), cannabis is the trendy area popular with stars looking to invest or start their own business. From CBD oils to “high-end” marijuana to THC-infused drinks, we’ve been shopping around for celebrity-launched brands.

It is on Instagram that the singer Mika announced, this Wednesday, October 13, his new entrepreneurial project. “Today I join the DIVIE adventure, which develops high-end CBD-based wellness products in France,” the singer wrote under a portrait. The Lebanese artist highlights the soothing properties of CBD, which he himself has tested on a daily basis.

“I was able to realize during my tours of the benefits of this molecule which brings a new balance in our lives”, he assures. “I therefore decided to take a stake in DIVIE, this young French company in order to make it a European benchmark in the CannaBiDiol and Well-Being industry”.

“Our flagship product is an organic oil, made in France, the result of a solid partnership with an Aveyron farmer specializing in the gentle extraction of cannabidiol from hemp”, explains the DIVIE brand on its site. “In addition to containing CBD, the so-called carrier oil is naturally rich in omega 3 and 9 as well as vitamin E. A concentrate of active ingredients for well-being”.

“I got my peaches out in Georgia, I get my weed from California”, sings Justin Bieber in his summer 2021 hit, Peaches. Driven by this success, the Canadian singer collaborated at the end of October with the Californian brand Palms, to market a range of pre-rolled joints … with a peach flavor.

“I’m a fan of Palms and all they do to make cannabis accessible by helping to de-stigmatize it – especially for the many people who find it useful for their mental health,” the artist said in a statement.

Interviewed on this new project by Vogue, Justin Bieber indicated that part of the profits generated by the sale of these products would go to “Last Prisoner Project”, an organization that fights for criminal justice reform in the area of ​​drug policy, and to “Veterans Walk and Talk, “a charity that uses cannabis and walking as therapy for former military personnel.

In 2014, the family of singer Bob Marley, who died in 1981, launched his official brand of marijuana products, called Marley Natural. Among the items on offer are seeds of a variety similar to the one the Jamaican singer used to consume in Jamaica, but also cannabis oil and products in the form of herbal tea.

“Bob Marley saw grass as something spiritual, capable of awakening our well-being, deepening our thinking, being in contact with nature and unleashing our creativity,” said in a launch statement. Cedella Marley, the singer’s daughter.

In 2019, Jay-Z entered the cannabis business in California (where its recreational use is legal). The artist and businessman, a dealer in his early years in Brooklyn before becoming a rap star, has been named “chief strategist” of Caliva, one of the industry’s leading companies. In a press release, Jay-Z pointed to “the potential of the cannabis industry”, and said he wanted to “create something great, have fun doing it, do good and support people”.

It is within the framework of this partnership that he launched Monogram in October 2020: a cannabis brand which is based on “noble” and high-end products. “With its careful strain selection, meticulous cultivation practices and uncompromising quality, Monogram seeks to redefine what cannabis means to consumers today,” the site assures.

Large consumer of weed who never hid it, Snoop Dogg launched his Leafs by Snoop brand in 2015, a few months after investing in a medical cannabis home delivery company, Eaze. In the process, the singer had put online a site dedicated to cannabis, merryjane.com.

Merry Jane is a kind of “cannabis encyclopedia”, presented as an online source of information on cannabis (the Wikipedia of marijuana, in short), with among other things a database on the different types d’herbe, an application for locating legal sales sites, but also “cultural” and editorial content, such as cooking recipes or video testimonials. Since then, the site has grown and now includes an online CBD sales platform.

“Happy Dance is a collection of premium CBD products designed for moms. Why moms? Because if someone needs a little more calm in their routine, it’s them.” Here is the pitch of Happy Dance, the CBD-based cosmetics brand launched in May 2020 by actress Kristen Bell, in collaboration with the Lord Jones brand.

On the product side, there are body butters, lotions, bath bombs and solid soaps, infused with CBD, for an average price of 25 euros.

Gwyneth Paltrow, head of her company Goop, has also entered the cannabis business, but in a drinkable version. The American actress invested in October 2020 in the Cann brand, which offers soft drinks infused with cannabis.

Each can contains 2 milligrams of THC (the psychoactive component of cannabis) and 4 milligrams of CBD. On the program, flavors such as lemon and lavender, blood orange and cardamom, grapefruit and rosemary, as well as ginger and lemongrass.

“Cann sits at the intersection of two powerful trends that we have been following closely at Goop for some time: the ‘sober curious’ movement and the ‘cannabis curious’ movement. ), “Gwyneth Paltrow said in a statement.

Seth Rogen launched “Houseplant” in California in March 2021 with his friend screenwriter Evan Goldberg. The Canadian actor had announced the arrival of his brand on Instagram, and is promoting his cannabis thanks to the best ambassadors: himself.

“This is what we do: we bring you the best varieties of marijuana that have been selected (and by that, I mean smoked) by myself,” he said in a video. “It’s just the weed that I love, the one I want to smoke. It comes in adorable little boxes. They can even stack on top of each other.”

“It’s honestly the job of my life, and I’ve never been so excited about anything else. Hope you like it,” he added. Thanks to such sales arguments, customers were there: Houseplant was so successful that the site crashed the day it was launched. To date, the brand is also on sale in 17 dispensaries in California.