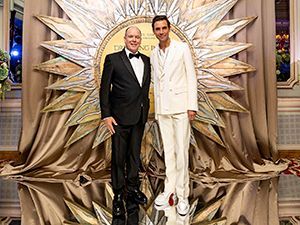 Mika: Under the Monaco sun

Mika was on the Rock to give a concert for the benefit of the charity association of Prince Albert II. The singer, who received from the sovereign a welcome worthy of a head of state, ignited the public and dropped this scoop: his next album, entirely in French, is coming soon. 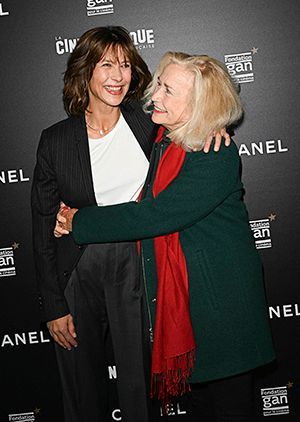 Fans of La Boum undoubtedly had stars in their eyes when they saw Sophie Marceau and Brigitte Fossey arrive together at the Cinémathèque française in Paris. Those who will forever be Vic and Françoise, the unforgettable daughter and mother of this great popular success, attended the preview of Une femme de notre temps, the last film in which Sophie plays. What emotion!

“For freedom”, says Juliette Binoche, before grabbing her hair and cutting a strand of it. With this symbolic act, the actress intends to support Iranian women who are fighting at the risk of their lives for their freedom since the death of the young Mahsa Amini, on September 14, after being arrested by the morality police. Scissors in hand, other French-speaking actresses and singers reproduce this militant gesture: Isabelle Adjani, Marion Cotillard, Jane Birkin and her daughter Charlotte Gainsbourg, Muriel Robin, Angèle, Firmine Richard, Julie Gayet, Isabelle Huppert or even the duo of friends Alexandra Lamy and Mélanie Doutey… “It is impossible not to denounce again and again this terrible repression. There are already dozens of dead men and women, including children, writes the group Support Women Iran. We thus decided to answer the call which was launched to us by cutting, us also, some of these locks. »

For love, one can climb mountains. Like the former President of the United States, initiating this hike to celebrate his 30 years of marriage to Michelle. “I don’t know why you stayed the same, unlike me. I know I won the lottery the day I met you. I couldn’t have asked for a better partner. Happy birthday sweetheart,” enthused Barack. If that’s not cute.

They will soon have to buy a bigger bed to hold the whole family since Alec and Hilaria welcomed Ilaria, their seventh child. “This is our first photo with the little Baldwins, writes the radiant mother. What a dream team! And again, Ireland, who Alec had with Kim Basinger, is missing.

Here is a grandpa and a granny who know how to put glitter in the life of their granddaughter. To celebrate the 4th birthday of their little princess, Goldie and Kurt have transformed this special day into a fairy tale. “Happy birthday Rani Rose, writes the actress. You are a real queen! We love you very much. ” Magical !

Now living far from Paris, preferring the mildness of the Luberon, Hélène de Fougerolles took the opportunity to take long walks. “Family team! Picking with my darling brother! “, she shared with her fans, posing with Thierry, whom she led on a mushroom hunt. Between Apt and La Tour-d’Aigues, Hélène is currently filming a historical miniseries, The Linden Masfor France Televisions.

Mathilde and Philippe of Belgium: Legends of the Fall

Take care of yourself ! Philippe, King of the Belgians, his wife Queen Mathilde and their children, Princess Elisabeth and Prince Gabriel, presided over the Blue Parade of the Royal Military School of Brussels on September 30. The opportunity to honor cadets who have completed their military training. Gabriel, among the recipients of the class of 2022, was specially allowed to pose with his family. Rest, soldier!

It seems that her mother is quite proud: it must be said that Maya, the daughter of Uma Thurman and Ethan Hawke, has inherited the perfect physique from her famous parents! At 24, the young woman, who was enlisted by Quentin Tarantino in 2019 in Once upon a time… in Hollywood, becomes the new face of the Calvin Klein brand, famous for its men’s and women’s underwear. A furry job!

Andie MacDowell is worth it!

At 64, the Hollywood star revealed in Greystoke, the legend of Tarzan alongside Christophe Lambert before Sex, lies and video, Palme d’or at Cannes in 1989, caused a sensation during the parade of L’Oréal ambassadors, at the Military School of Paris, under the sign of sorority, solidarity between women. More radiant than ever, Andie MacDowell, one of the first to assume her silver hair, lit up the catwalk. “I’ve always admired those with salt and pepper hair. So, naturally, I too wanted to adopt this shade which I find particularly soft and flattering, ”she confided in vogue. “I only need to put on a little lipstick to feel good. I don’t need or want to look like I’m not! Andy? We love it!

If Ryan needs a little help carrying his luggage, don’t hesitate! Even if it means pointing out to him that he probably saw a little big for a weekend. Unless he has a long vacation in store for us on a desert island. Impossible to refuse anything to Ryan Gosling, new Gucci ambassador…

Clotilde Courau: Beauty of the night

Since 1952, Carita has been styling the biggest stars, from Grace Kelly to Sophia Loren, via Mireille Darc and Mireille Mathieu. For its 70th anniversary, Carita inaugurated new premises on rue du Faubourg-Saint-Honoré, in Paris, with a plethora of celebrities including Clotilde Courau, Princess of Venice and Piedmont, and one of her daughters, Vittoria de Savoie, 18 years old, Princess of Carignan and Marquise of Ivrée. Like Mother like daughter !

“It’s good to be back in Paris! “, posted Charlène of Monaco on Instagram, while she was on her way to the Louis Vuitton Spring-Summer 2023 show, which she attended to everyone’s surprise, alongside Janet Jackson and Léa Seydoux. A new confirmation that the princess has indeed regained the upper hand. In a slim checkered jacket in a blue shades, the mother of Gabriella and Jacques de Monaco offered herself this fashion escapade without Albert.

Mika, Alec Baldwin, Ryan Gosling …. And all the echoes of France and Hollywood!

Cannes 2022: 10 facts about Viola Davis, the actress of the Women In Motion award
Salma Hayek, radiant at 56 and thus celebrates it
When Jack Nicholson found out that his sister was his real mother