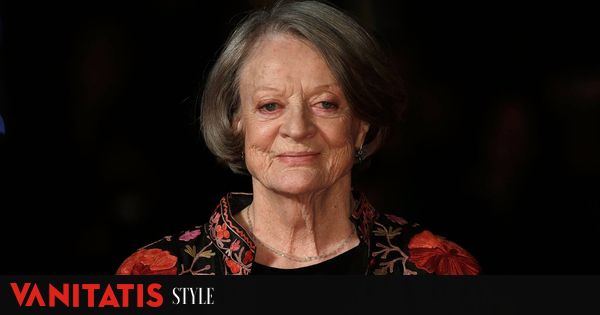 The younger generations know her for her roles as Minerva McGonagall in the immensely popular series of films based on the character of Harry Potter and the sarcastic Countess Violet Crawley in the historical drama ‘Donwton Abbey’. But the 69-year history of Maggie Smith they are full of successes in film, theater and television. Although some may think that his greatest merit was helping a young actor to achieve the role of his life …

About to turn 87, which will mark seven decades since her debut at age 17 in the theater, the career of this Lady – named in 1990 for Queen Elizabeth II for his contribution to the performing arts – it has paralleled practically his entire life. Born in a town near London to a pathologist father and a secretary mother, she moved to Oxford at the age of four with them and her two twin brothers, Alistair e Ian.

There she went straight from the Oxford High School for Girls, which she has confessed she didn’t like very much, to the Oxford Playhouse School of Theater, and from the beginning was the subject of rave reviews. “Miss Smith is a walking talking llama”, wrote about her the prestigious journalist Bernard Levin. “I swear he never puts his foot on the ground at all times, but floats a meter above the stage.”

After a brilliant and award-winning career in the theater, it would debut in 1955 on television with a BBC series. The following year he jumped to the big screen and two years later he already received his first BAFTA nomination. In 1969 her role as a charismatic Scottish school teacher in ‘The prime years of Miss Brodie’ earned her her first best actress Oscar. An honor that she would repeat just a decade later, achieving the golden statuette, this time in the category of best supporting actress, for her portrayal of the eccentric Diana Barrie in ‘California Suite’.

But one of the roles that has given him the most fame, at least among the youngest who are unaware of the bulk of his career, is that of Professor Minerva McGonagall in the young wizard movie saga Harry Potter what will create JK Rowling and whose first film is now twenty years old. Beyond masterfully playing one of the fan-favorite characters, Maggie Smith played a pivotal role in Daniel Radcliffe end up embodying the main role of the franchise.

When the English actor was interviewed on the show Stephen Colbert last August, she explained how the veteran actress helped him land the role of his life. “I first met Maggie Smith when I was 9 years old,” Radcliffe said.

“I did a series with her before ‘Harry Potter’ called ‘David Copperfield’, a BBC adaptation. Maggie was the person who recommended me for the character of Harry Potter. So she’s the reason I ended up doing it. I did not know who it was. My parents were like, ‘oh my gosh, you’re working with Maggie Smith, that’s great’. But I had no idea who they were talking about. ”

Following the enormous popularity of the eight films, the actress again savored fame this time on television after her brilliant role in the British series ‘Downton Abbey’, a period drama centered on the Crawleys, an aristocratic family, and their servants. For her portrayal of Violet, Dowager Countess of Grantham, won three Emmys (2011, 2012 and 2016). In 2019, he reprized the role for a feature film in which we met the Crawleys again as they prepared for a royal visit.

Interestingly, that same year the interpreter jumped to the headlines for an interview with ‘The Guardian’ in which he apparently disparaged both roles. “I am deeply grateful for the work on ‘Harry Potter’ and indeed ‘Downton Abbey’, but they weren’t quite satisfying. I didn’t really feel like I was acting on them“.

Discreet when it comes to her personal life, the actress was married twice. The first, with Robert Stephens, father of his two children, who have followed in his footsteps in acting. Their marriage only lasted seven years and in 1975, shortly after divorcing, they remarried the playwright Beverly Cross, who passed away in March 1998.

Maggie Smith He has also had to face serious illnesses on two occasions. The first was when in 1988 she was diagnosed with Graves-Basedow syndrome and was isolated for twelve months, having to receive radiotherapy treatment and eye surgery. In 2008 he was diagnosed a breast cancer after he discovered a lump on his chest. In 2009 he spoke openly about this disease, which he defeated without stopping working. “I had no hair. I had no problem putting on the wig. It looked like a boiled egg.”she told ‘The Times’ adding that the chemotherapy made her feel “horribly ill. I would hold on to the railings, thinking ‘I can’t do this.’

Heading into her ninth decade of life, she does not seem ready to retire yet, but as she acknowledged a few years ago in a conversation with Judi Dench at London’s Tricycle Theater, she is convinced that she would not have succeeded in the entertainment industry had she started her career today. “I think young actresses today are very brave. It seems they have to strip every second. I can’t imagine how they manage today, I really don’t know. They are required to do the most extraordinary things. ”

Maggie Smith: from Hogwarts to Downton Abbey with two Oscars under her arm