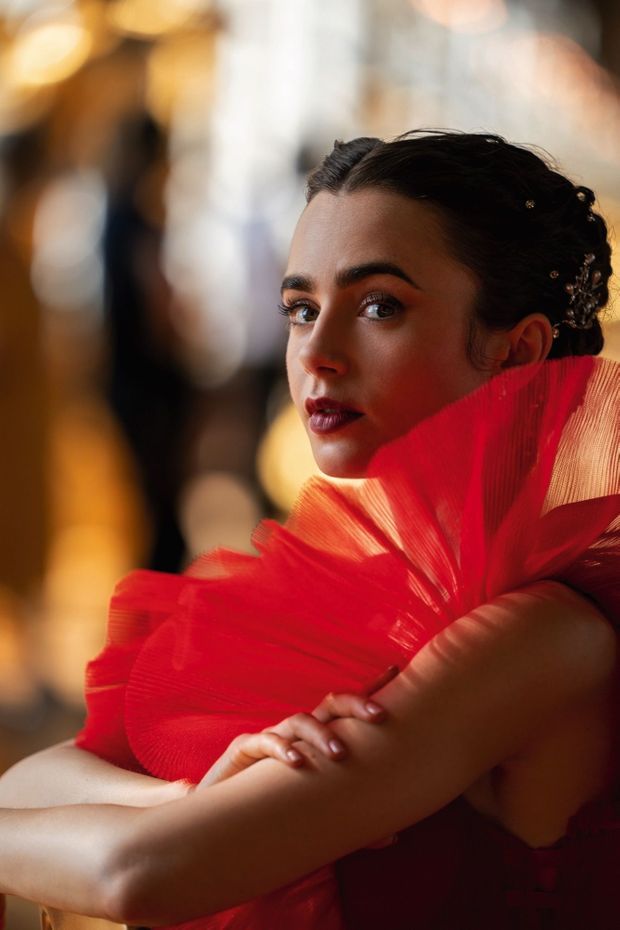 So chic… It is a pleasure for Lily to find her role as an American expat in Paris, postcard version. In season 2 (available on Netflix on December 22), no risk this time to hear yourself say “You are a plouc”. The heroine has adopted the codes of glamor and French savoir-vivre.

Her circumflex eyebrows and her dancer’s silhouette have circled the planet in just a few months. At 32, the daughter of Phil Collins became a Marianne “made in USA” in the Paris postcard of “Emily in Paris”, season 1. To believe her, Lily Collins did not hope to conquer such a title. “To benefit from such a welcome is a gift! she enthuses from Los Angeles. Emily is an ultra-talented character to play, even more so in this idyllic setting. I loved these weeks of filming in France. »Season 2? Sometimes outrageous, always good spirit, a good show with the added bonus of some biting projections. This American series filmed entirely in France, from Place des Vosges to Saint-Tropez, is a cultural exception. A first. Its creator, Darren Star, is the inventor of “Sex and the City”.

With all due respect to purists, Emily is once again projected on the front of the Seine, between couture berets, chic bistros and hot croissants. Bottling France, yes, but to what extent? To the cassandres which sulk a frivolity not always controlled and strangle in front of the lack of realism, the actress retorts in a blink of an eyelash: “I am aware that this kind of program does not please everyone. I do not hide the criticisms and the general opinion is important to me, of course, but, in the dark world in which we operate, the public needs lightness and escape. This is also our point. “The series unveils the logbook of a candid foreigner, uninhibited and courageous, confronted with Parisian diktats, aberrations and snobbery, as well as the execrable character of these dear French people … An avalanche of clichés, often triggered to cover up with them. others. But also an initiatory role.

Lily Collins prefers to be interested in Emily: “What do I like about her?” She assumes herself as she is. As romantic as she is hardworking. Unique and inspiring, all the female figures of the show show extreme motivation. My character and I have in common that we constantly find solutions to our problems, rather than stumble upon them. “Within this slightly hysterical gynaeceum, Philippine Leroy-Beaulieu, ruthless patroness with the appearance of a praying mantis, and the electric Ashley Park skillfully pull out their game.

“Emily” transported Lily to a new realm. She is now a muse who amassing juicy contracts to represent prestigious brands, mainly French. Actress, model, author, social media star and generational icon, this pure product of her time with an overloaded schedule is also a co-producer (for the first time) of the series of which she is the linchpin. She sees this role as a new challenge: “I’m learning to assert my point of view, to sharpen my ideas… What could be more stimulating? “Marketing manager of a communication agency specializing in luxury for the needs of the script, Lily Collins is not the kind of epiphenomenon that has to disappear with the snap of her fingers.

Between couture berets and hot croissants, a little American celebrates our snobbery and accepts our execrable character

Noticed in 2012 in “Snow White”, she avoided the pitfall “Disney princess” and opted for daring scripts. Anarchist in “Okja”, by Bong Joon-ho, fi ancée of serial killer Ted Bundy in “Extremely Wicked, Shockingly Evil and Vile”, by Joe Berlinger… and above all private secretary to Herman Mankiewicz in “Mank”, by David Fincher , a black and white film about the Hollywood mogul played by Gary Oldman. She is already camping a determined twig there. “I like to learn from the cream of the crop,” she says to explain her choices. It seems that the spotlight attracted her early: at 2 years old, in the British series “Growing Pains”, she appeared for the first time in front of a camera. She has 5 when her parents separate. The father, Phil, remains in Europe; the mother, Jill Tavelman, settles in Los Angeles where she follows her.

Between two product placements, obligatory marketing, alienation, culture shock and forced adaptation will constitute the other favorite themes of “Emily in Paris”. “When I moved to America, I didn’t feel in my element. I had this feeling, young, to be different. Everything seemed lunar to me there. The kid is looking for herself and not just because her parents are scaring each other. Their divorce will cost them several million pounds. For a while, Lily envisaged a career in journalism, she wrote a few articles for the teenage press, published in 2017, at the age of 28, her Mémoires. Yes, it’s a little early, but there is no age to think of yourself as interesting.

The thin book allows her to evoke her problems of anorexia, a subject that she also broaches in the feature film “To the Bone” … A catharsis whose virtues she recognizes: “This book and this film have allowed me to open up to others and consider a possible cure. ” It is also an opportunity to look back on her relationship with her father, the great absent from her youth, to whom she offers absolution. The wound has healed: forty-eight hours before our interview in early December, Lily was attending the Genesis concert (in which her father sings and her brother plays the drums) at Madison Square Garden in New York. “I couldn’t have been prouder, I even cried.” The interpreter of “Against All Odds” and “One More Night” he served as revealing to the career of his younger sister? She reflects, admits: “Even if he was a bit of an actor, he is not at the origin of my passion for cinema. But the way his art touches audiences inspires me. My father has a gift for telling stories and moving people. ” A father who now enjoys being presented on the radio as “the father of Lily Collins”. She leaves the music to the other members of her illustrious clan: “No way to record an album. If I had to sing again, it would be for the needs of a movie or a musical. ”

Unlike Emily, her fictional double who “selfizes” 24 hours a day, Lily seems less attached to her cell phone than to a visceral need for authenticity. Privilege that allows her, she explains, Charlie McDowell, screenwriter and director whom she married last September: “The only man with whom I have the impression to be really me” and with whom, during the pandemic, she shot “Windfall”, a feature film scheduled for 2022. This Anglo-American thirty-something does not come from nowhere. Like her, he is a member of the eminent brotherhood of “Children of”, as the son of Malcolm McDowell, the unforgettable Alex of “Clockwork Orange”

Followed on Instagram by no less than 24 million subscribers, Lily agrees to lift a modest veil on her private life, and publishes some photos taken on her wedding day in Colorado … Otherwise, she sticks to a relative anonymity which contrasts with his supercharged status of digital top model. In a few words: “I love interacting with my fans, but I want to continue to lead a peaceful and fulfilled existence, alongside my husband and our dog.” Speech given to the channel to discourage the curiosity of journalists or because it reflects a daily life of distressing banality?

The year 2021 was a pivotal year, she admits. Remembering the past period, she raves: “I lived twelve idyllic months where I was able to work, go on honeymoon and travel. I matured, changed, took the necessary distance, reassessed my priorities and carried out introspection work to lay bare this new me. ” Just that!

In an era where series guarantee unprecedented visibility to female heroines whose perfection is no longer required – wrinkled, thick, powerful, but alive and not frozen like bits of plastic – “Emily in Paris” praises of a certain “inclusiveness”. Julien, a deceptively viper-like gay man, and Luke, a lunar forty-something, complete a deliciously psychotic picture, a gallery of sometimes artificial characters who have the merit of existing. Isn’t Lily Collins afraid of being too identified with her role, to the point of being encumbered one day? “The public will decide! she concludes. Emily has not finished inspiring me, I want to grow and continue to have fun with this character who brings me so much. “She intends to continue her journey on the road to success paved with diamonds:” I have a lot to prove, to me and to the world. “