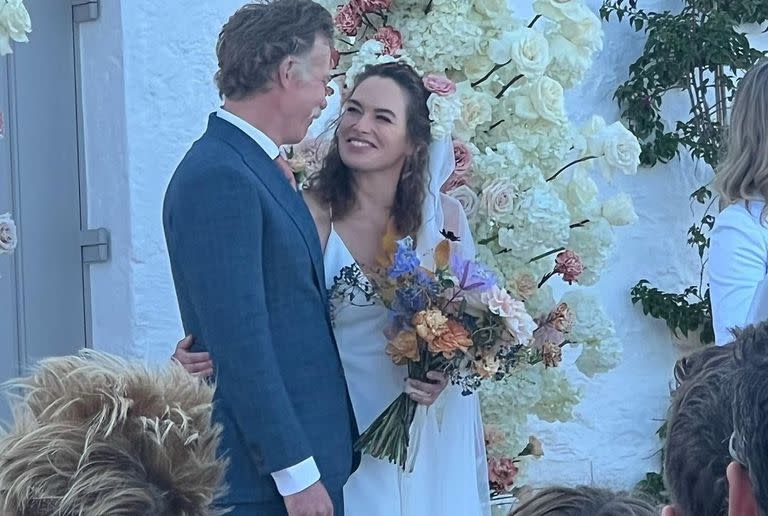 This weekend, the cast of games of thrones was partying and reunion after Lena Headey, who played Cersei Lannister in the popular series, will marry her partner, the actor from Ozarks Marc Menchaca.

The ceremony took place on October 6 in southern Italy, in the Puglia region. Friends and relatives of the couple traveled there, who enjoyed this special moment in their lives with both. Peter Dinklage, Emilia Clarke, Sophie Turner with her husband Joe Jonas, Michelle Fairley and Conleth Hill were some of the famous guests at the wedding.

Throught social media, guests shared images of the festivities showing the world a little bit of the intimacy of Headey’s big day. In the photos and videos, the stars could be seen drinking wine and smiling under the Italian sun. It was also possible to see the bride’s dress, a white sundress with a V-neckline and bare back that she decorated with flowers in her hair, which she wore loose.

Scinuà, a local restaurant, also shared a snapshot of the meeting of the actors of games of thrones starring Dinklage (Tyrion Lannister), Michelle Fairley (Catelyn Stark), and Conleth Hill (Varys).

This is the third marriage of the 49-year-old British actress, who married her first husband and father of her son Wyle, musician Peter Paul Loughran, in 2007. After divorcing in 2013, she went through the altar again, this time with director Dan Cadan, with whom she had her daughter Teddy in 2015. In 2018 the couple separated, and two years after that, the actress met Menchaca, 46.

The actors confirmed their relationship in November 2020, although they had already been seen spending time together several months earlier during the premiere of the Stephen King adaptation for HBO, The Outsider, in which Menchaca had an important role. Today they both live in the United States. “It is where the best roles are for her, in addition to the fact that she has a relationship that is being born with Marc, so doesn’t see any point in living in the UK”, commented a source close to Headey to The Sun media a while ago.

After completing his work in games of thrones, Headey lent his voice to the Netflix animated series Masters of the Universe: Revelation; She starred in the English version of the French series Rita (which was eventually made into a telefilm) and was part of the long-awaited HBO miniseries starring Woody Harrelson and Justin Theroux, The White House Plummerswhich reconstructs the Watergate scandal from the point of view of those who planned it.

Headay has recognized on several occasions that he has a very special sensitivity. Shortly after the recordings of games of thrones, The actress told Jimmy Kimmel that on the last day of filming she tried to sneak out before the final speeches because she knew she was going to crack, but she couldn’t: they caught her on the way. The rest of the cast and production people forced her to stay.

“I knew David [Benioff] and Dan [Weiss]the creators, were going to give speeches and they were going to give us the drawings of the storyboard of our characters. And all of a sudden I got really excited and tried to run down the stairs fast. But I couldn’t, they saw me and rushed to catch me. So they said those words and it was very moving,” he said. He also admitted that when he said goodbye to Cersei on stage, he was very moving.

YOU MAY ALSO BE INTERESTED | ON VIDEO: Emilia Clarke could lose her speech after undergoing brain surgery

Lena Headey, the actress of Games of Thrones, married and there was a reunion with part of the cast of the series

"The Batman": a sequel planned for Robert Pattinson's superhero?
Jessica Alba and the high price she paid for saying "I don't like being called Latina"
Mindy Kaling Ends Criticism That Velma Is South Asian In Upcoming Scooby-Doo Series