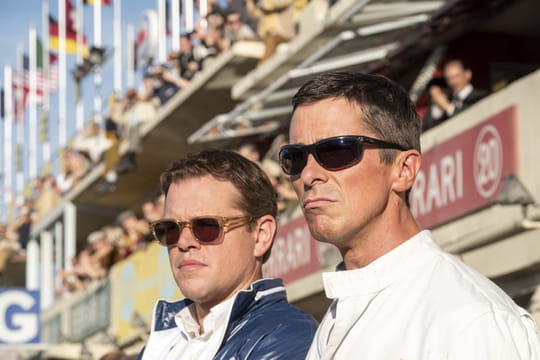 LE MANS 66. Le Mans 66 traces the epic clash between Ford and Ferrari teams in a car race, with Christian Bale and Matt Damon in the cast. Where was the film shot?

[Mis à jour le 26 octobre 2021 à 20h45] If Le Mans 66 bears the name of the city of Sart and is about the famous 24 hour race of Le Mans, France was not used as the backdrop for James Mangold’s feature film. Matt Damon and Christian Bale shot this biopic on the rivalry between Ford and Ferrari in Georgia, where the 24 Hours of Le Mans route has been recreated. “It took months and months of work. Everything had to be coordinated” described the head decorator François Audouy in the columns of Allociné.

For Le Mans 66, James Mangold wanted to give an impression of authenticity and realism. Before the shoot, Christian Bale took driving lessons to be more convincing in the role of Ken Miles. He finds himself behind the wheel of a few cars on the screen: “We had excellent drivers who worked on this film and who drive at Le Mans,” says the actor. I would love to say that I was able to driving the cars and doing the scenes myself, but it wouldn’t have been as exciting as in the movie. You have to let the professionals do it. ” This choice allows you to bring out the adrenaline during motor racing scenes, a treat for car enthusiasts but also for neophytes!

Christian Bale and Matt Damon sent to 300 km / h in epic races. This is what awaits spectators who will discover Le Mans 66. Directed by James Mangold, this feature film traces the rivalry between Ford and Ferrari during the 24 Hours of Le Mans in 1966. In the 1960s, Henry Ford He gives Carroll Shelby (Matt Damon) an almost impossible mission: to defeat the Italian automobile company on the race where it is queen, the famous Sarthoise race. For this, Carroll Shelby calls on Ken Miles (Christian Bale), a totally atypical British pilot. Battling against capitalism, these two car enthusiasts will nevertheless achieve a real sporting and mechanical feat. During 2h30, the public is transported between the intimate drama and intense races worthy of the greatest action films.

Synopsis – In 1966, the clash of the titans was preparing for Les 24 heures du Mans. The Ford team have been beaten by Ferrari twice now, and it’s time to end that reign. Yet Fords show signs of overheating and instability at high speeds. But Ken Miles, the pilot, will take all the risks.

Le Mans 66, which brings together Matt Damon and Christian Bale on screen, is it worth it? This is the case, according to the first press reviews. These are relatively unanimous: for the press, Le Mans 66 is a very effective entertainment that has everything to seduce fans of motor racing, but not only. The Parisian interviewed former car drivers to find out their feelings about the film’s realism. Le Mans 66 did not disappoint: “The general impression was very positive, which is quite rare for drivers when it comes to racing films,” describes Gérard Larrousse, who has won Le Mans twice, at the occasion of a screening organized for former pilots. However, they still found the film “Hollywood”, noting a few technical errors that only racing drivers can notice.

But before being a car movie, Le Mans 66 is a biopic on the complex and tumultuous friendship between Carroll Shelby and Ken Miles. For Le Point, Le Mans 66 is “an ambitious quest” on “crazy people behind the wheel”, while Télérama hails “shining entertainment”. Le Figaro classifies this production in its selection of films to see absolutely this week, and The Obs is dithyrambic: “This film is a pure happiness”, writes the journalist, praising the painting of America which proposes the film, the spectacle proposed, and the last sequence of the film, the one focused solely on Les 24 heures du Mans. Ditto for Première, who qualifies this biopic as “good entertainment”. The specialized media also salutes the underlying political point of this production with a five-star cast: “Mangold also tells the story of a certain America, the one who does not hesitate to leave casualties to the side. […] Le Mans 66 is a film that is much more political than you think. ”An entertainment that is therefore likely to bring together all audiences.

Behind Le Mans 66, there is a real feat that motor racing enthusiasts know well. In the early 1960s, Henry Ford II hoped to buy parts of Ferrari, in order to ally the largest car manufacturer with the Italian champion. Negotiations are progressing well until Enzo Ferrari decides to cancel everything. An affront that Ford will refuse to let pass. He challenges himself to defeat Ferrari on his own home ground, Les 24 heures du Mans. He gives the mission to Carroll Shelby, a former driver who has won the race in the past and who has since moved into engineering and automotive sales. The Texan will have to create a prototype Ford racing car, the GT 350. After several failures, he designs the GT40 with the help of his friend Ken Miles. We still have to convince the American manufacturer to let the British driver, exceptional but very characterful, drive the machine to the 24 hours of Le Mans. In 1966, it is an exceptional race which will oppose the two automobile giants, the outcome of which will not be revealed to leave the pleasure to the spectator who wishes to discover it on the big screen.

Before being a feature film about a historic rivalry between two automotive giants, or simply a spectacular car race, Le Mans 66 is a film about the tumultuous friendship between Carroll Shelby and Ken Miles. “The important thing for me in this film was friendship, camaraderie, the idea of ​​accomplishing something together”, confides James Mangold at a press conference. “I tried to make a film that works like an adult drama, with action.” A desire displayed by the cast, including Christian Bale: “There is a shared obsession between these characters, a common goal […] It transcended the film: instead of being just a car racing film, it’s a story of friendship. “

Le Mans 66: where was the movie filmed with Matt Damon and Christian Bale?