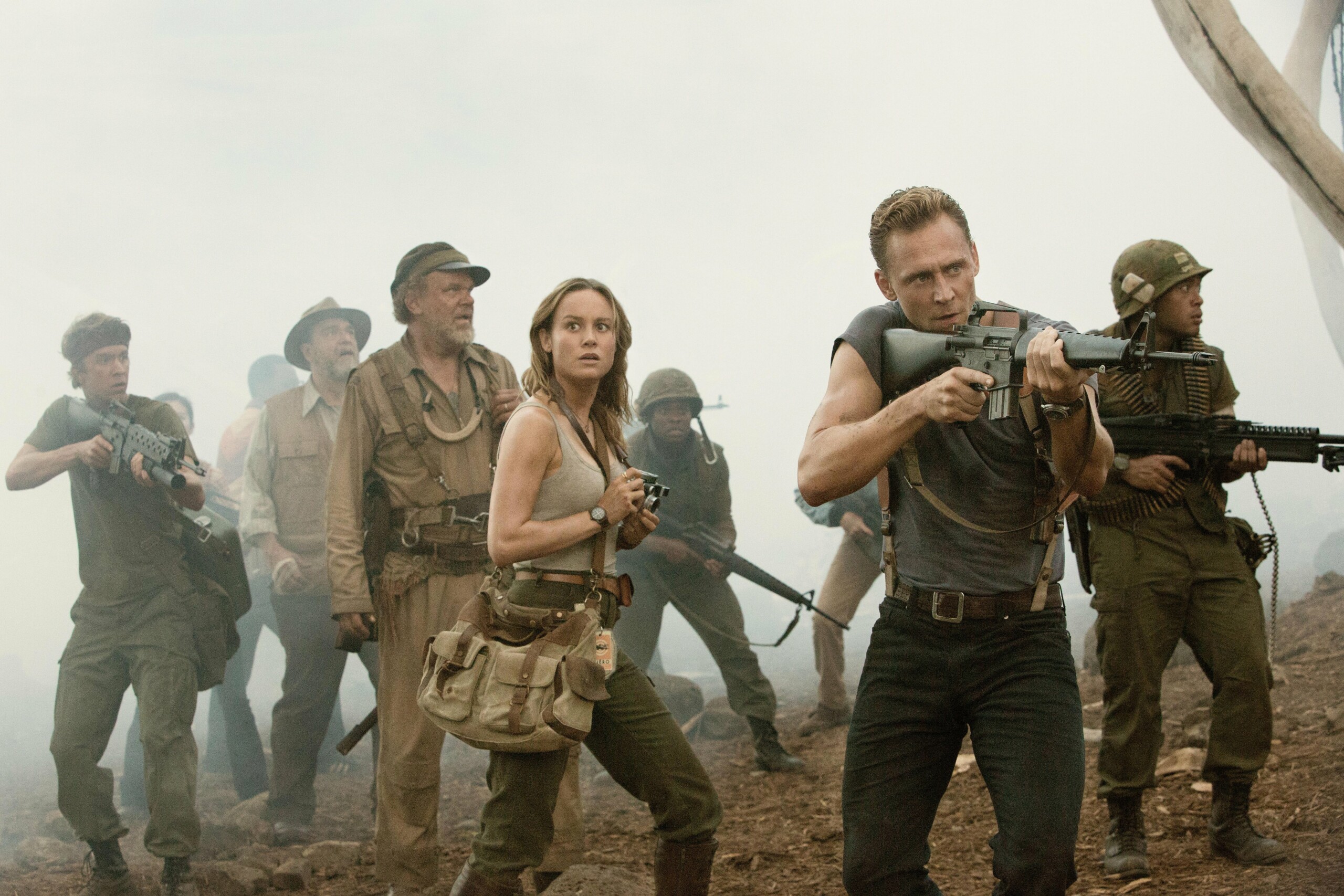 Brie Larson and Samuel L. Jackson are working together for the first time on “Kong: Skull Island”, released in 2017. The complicated filming of the blockbuster marks the beginning of a long friendship between the two actors …

After Godzilla by Gareth Edwards released in 2014, the MonsterVerse expands three years later with Kong : Skull Island. Directed by Jordan Vogt-Roberts (The Kings of Summer), the feature film – which will be followed by Godzilla II: King of the Monsters and Godzilla vs Kong – introduces the giant gorilla created by Merian C. Cooper and Edgar Wallace.

In this version, the expedition to Crane Island, located off the Pacific Ocean, is launched in 1973 by explorer William Randa (John Goodman), convinced that the Earth does not belong to men, but to monsters. Going in search of a mythical creature, he surrounds himself with a squad of soldiers led by Colonel Preston Packard (Samuel L. Jackson) for his trip. Mercenary James Conrad (Tom Hiddleston) and photographer Mason Weaver (Brie Larson) also join the mission.

On their arrival aboard helicopters, Packard’s men detonate several bombs, which anger the master of the place. It doesn’t take long for Kong to take revenge, but explorers soon discover that he is far from the most terrifying threat on the island.

John C. Reilly, Corey Hawkins, Jason Mitchell, Jing Tian, ​​Toby Kebbell, Shea Wigham and John Ortiz complete the cast of this journey through hostile land, which multiplies the tributes supported by Apocalypse Now and In the heart of darkness.

The filming, spread between Vietnam, Hawaii and Australia, is not always a piece of fun for the actors. The latter aim to imagine gigantic enemies and invisible, around which the indications are sometimes not very clear. Returning to the subject with diplomacy to the RTBF, Samuel L. Jackson explains on this subject:

We work with a very talented team and actors like John Goodman, John C. Reilly, Tom, Brie… We understand each other, we know how to interact with each other. The difficulty was therefore to render well what we did not see. We asked the right questions to know where Kong was at such and such a moment, how tall, what build he was. Depending on who we asked, we got a different answer, but what is certain is that neither of us expected Kong to be so impressive.

Measuring more than 30 meters, Kong is indeed the tallest version of the gorilla in an American production, dethroned since by its reappearance in Godzilla vs Kong, given that it keeps growing in the MonsterVerse.

The team must also face the humidity of the jungle, the heat or the insects. In these complicated conditions, Brie Larson and Samuel L. Jackson develop a real bond, as the actor tells IndieWire in 2019:

It was a really tough shoot. We were in remote places and trying to figure out where we were, what we were doing, how it was going, if you know what I mean. You don’t have a network, you kind of have to interact with each other, talk, hang out, and fight bugs together. This is what we did and we loved complaining together and supporting each other.

During the production of Kong : Skull Island, Brie Larson must regularly be absent to attend many ceremonies that reward her for her performance in Room. At each of his departures, the temporary farewells are a heartbreak for Samuel L. Jackson. He adds with humor:

Samuel L. Jackson also discovers during the filming that Brie Larson is working in parallel on her first feature film as a director, Unicorn Store. When he learns that she has entrusted the role of “salesman” to another actor, he does not fail to express his disappointment to her:

I was like: ‘Really ?!’ So when I saw her the next day I said to her, ‘So you’re making a movie, huh, you wrote it and you’re directing it and you’re going to direct this actor, when you didn’t even ask me ? ‘

After their explanation, the two actors therefore work together again on Unicorn Store. In 2019, they also share the poster of Captain Marvel, in which they form a duo worthy of a buddy movie. When Samuel L. Jackson arrives on the set on May 4, date which corresponds to the famous day Star Wars, the interpreter of Mace Windu brings a gift to his partner, fan of the franchise. Passing through the Tonight Show of Jimmy Fallon, Brie Larson recalls:

He walked in and dropped a bag in my lap. It was a beautiful silk bag and I asked myself: ‘What is this?’ It was his lightsaber. I immediately burst into tears. I don’t think he was even supposed to have it. I don’t think I’m supposed to say he had it.

A cult object on which are engraved two equally cult words: “Bad Motherfucker”.

Kong Skull Island: How did the film seal the friendship between Brie Larson and Samuel L. Jackson? – CineSeries