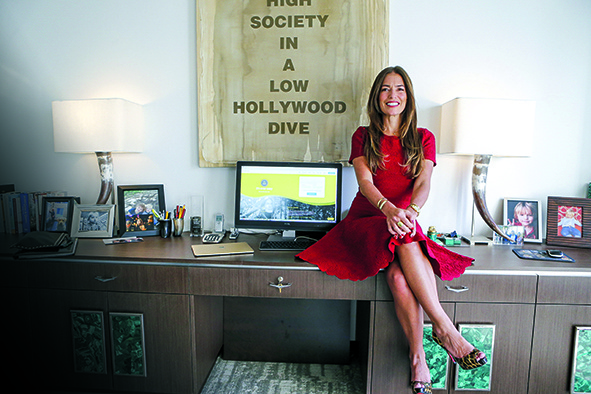 On the eighth floor of a glass tower in Century City, one of Los Angeles’ major business districts, in the early 2010s, a lawyer talks to her client, a prominent young actress, about her upcoming divorce. . Azzedine Alaïa black dress, Louboutin pumps, gold bracelets … In terms of elegance, the forty-something lawyer with an athletic silhouette has nothing to envy the starlet sitting in front of her. Through the bay windows, we can guess, in the distance, the letters of Hollywood on the hillside. Closer to home, other law firms and artistic agencies make up the skyline of this futuristic neighborhood. The room, with its ocher colors, white lights and large glass table on which rests a box of paper tissues, is bathed in calm and serenity.

Above the sofa, a canvas by the American painter Edward Ruscha sets the tone. In the center, two words written in Gothic letters on a blue background: “The End”. Interrupting the two women, a man knocks on the door and enters without waiting. The octogenarian with the white mane, silk tie and cufflinks, asks to speak to the lawyer. Then he comes to greet the client and begins to discuss. “OK, thank you dad”, launches the hostess before politely dismissing the intruder. And the actress exclaims: “It’s so nice to let your father work in your office!” “

Except that the owner of the firm Wasser, Cooperman & Mandles, it is him, Dennis Wasser. He co-founded it in 1976. His daughter did not join him until nineteen years later. But today, Laura is the star. The one that All-Hollywood is tearing off when it comes to negotiating the best possible divorce.

“The more you argue, the more money I earn”

The family law specialist has defended countless celebrities in often complex trials, with considerable financial and symbolic stakes, under the eager public eye. Angelina Jolie, Britney Spears, Drew Barrymore, Johnny Depp, Heidi Klum, Christina Aguilera, Ryan Reynolds, Anna Faris, Ben Affleck, Dr Dre, or even Gwyneth Paltrow and Chris Martin all passed in his office. His latest take, which got him the center of attention again, was none other than reality star Kim Kardashian, who filed for divorce from rapper Kanye West on February 19 after six years of marriage. . For the media, this is the deal of the year. But Laura Wasser remains silent, as usual.

The one we call the “Disso Queen” – “disso” is the diminutive of “dissolution”, a legal term used for divorce – is renowned for its diligence and discretion. It seeks to reduce as much as possible the scandalous load of its files. The stars appreciate. Just as they acclaim his relaxed communication style and his intensive use of emojis.

“Let things be clear: the more you argue, the more money I earn,” the lawyer immediately announces to those who sit on her sofa. Indeed, at 700 euros per hour (minimum) and 21,000 euros down payment, it is expensive discord. “But that’s not my goal because, although our family firm only works with high net worth clients, our goal remains to make their lives easier. It’s not all about the money: emotions play a big part in a divorce. This philosophy has made the tenor of the Californian bar inescapable.

His masterstroke, the divorce of Britney Spears

Brian Grazer, producer to whom we owe most of Ron Howard’s films, used his services in 2006. “You can call Laura and complain, tell her you’re angry, blah blah… She’ll answer you. calm, logical way, and will push you to temperance, ”he confided to Bloomberg magazine in 2016. This does not prevent her from being fierce in the face of the opposing party, and often getting what she wants . Her negotiating skills are described by those who have dealt with her as “out of the ordinary”. An iron fist in a velvet glove.

Asked what would constitute an ideal divorce, the lawyer quotes Chris Martin and Gwyneth Paltrow. The two stars came to see her, together, in 2014, for a “conscious decoupling”, in the jargon of the actress-influencer. “They’ve really done what most couples say they want to do but don’t always stick to it: putting their children’s best interests first. And the worst divorce? She does not specify, for obvious reasons of confidentiality, but it is to be bet that she lived that of Brad Pitt and Angelina Jolie as a failure. The actress fired her, in 2018, after more than a year of proceedings, no doubt annoyed at not having obtained full custody of the children. The Wasser method doesn’t always work.

Stevie Wonder never doubted. So much so that he called upon her twice, in 2001 and then in 2015. The first time that the author of “My Cherie Amour” offered his services, he sought to defend himself against an ex- companion who accused him of having contaminated her with herpes, and demanded 25 million euros. It is not known how much Laura Wasser negotiated after the mediation, but her client was satisfied enough to recommend her to his friends, thus opening the doors to the jet-set of Los Angeles.

But the real masterstroke, the divorce that made her famous beyond the circles of celebrities in sentimental distress, is that of Britney Spears, in 2007. Under the gaze of the whole world, the lawyer defended the pop star to whom she has avoided losing custody of her children. Even if, a few months later, following a rapid descent into hell, Britney was again summoned before the judges, at the request of her ex-husband. This time Laura Wasser was not there, discouraged by her client’s erratic behavior. And the singer has had her custody rights withdrawn.

The Hollywood gratin is not content to confide his divorces to Laura Wasser: he consults her, or even draws inspiration from her. In 1997, still a beginner, she intervened in the film “Liar Liar” by Tom Shadyac. With her father Dennis, she advises the main actor Jim Carrey on the verisimilitude of his character of lawyer, victim of a curse which forces him to speak only the truth …

The second time, in 2019, Noah Baumbach would have been inspired by it to imagine the lawyer of his film “Marriage Story”, played by Laura Dern (Oscar winner for this supporting role), this woman by turns ruthless and gentle, brittle and empathetic, who takes off his Louboutin pumps before curling up on the sofa. Laura Wasser’s office, barely modified, served as the backdrop.

In fact, Baumbach knows her well, since it was she who defended his ex-wife, Jennifer Jason Leigh, during their divorce between 2010 and 2013. Asked about these similarities, the lawyer does not deny, without confirming, and in good rhetorician, take the opportunity to make an argument close to his heart. Shortly after the film’s release, she told Town and Country magazine that if you didn’t want to end up like these characters and see someone so tough to represent your wife, you had better prepare for a divorce. “This is an excellent warning,” she concludes.

Anticipating separation is his leitmotif. She repeats it in interviews, in her weekly podcast “All’s Fair With Laura Wasser” (“Everything is fair with Laura Wasser”), in her bestseller “It Doesn’t Have to Be That Way: How to Divorce Without Destroying Your Family or Bankrupting Yourself” (“It’s not inevitable: how to divorce without destroying your family or ruining yourself”), or on his low cost divorce site Itsovereasy.com. It offers formulas between 1,650 euros and 8,300 euros, a modest sum given the average cost of a divorce (12,500 euros), and especially its usual fees, which can reach hundreds of thousands of euros.

Because the lawyer intends to revolutionize the procedure: “Marriage has changed, divorce must also evolve.” According to her, the best way to negotiate it is to consider it early on, ideally in a prenuptial arrangement, or “Prenup”, in English – a very popular formula among the Californian bourgeoisie. In the absence of prior agreement, the law provides that the spouses share everything at 50%, including the royalties of an artist.

Without prenup, Kanye West should have donated a good part of his fortune – estimated by Forbes to 1.5 billion euros – to his ex-partner, who weighs, “only” 650 million euros. For the time being, the negotiations are going on without scandal. “This is proof of good communication in the couple, and those who make the effort to have these unpleasant discussions without waiting are those who hold together the longest”, analyzes the lawyer.

Laura Wasser’s experience as a couple is more professional than personal, since she divorced young after a brief union, and has not remarried. “I’m only good at divorces. I have no idea how to stay married! »She blurted out to the Telegraph in 2013. She had two children, by two different men, but lives alone. Which does not prevent her, she says, from being in harmony with them when it comes to custody. Who, anyway, would be reckless enough to quarrel with him?