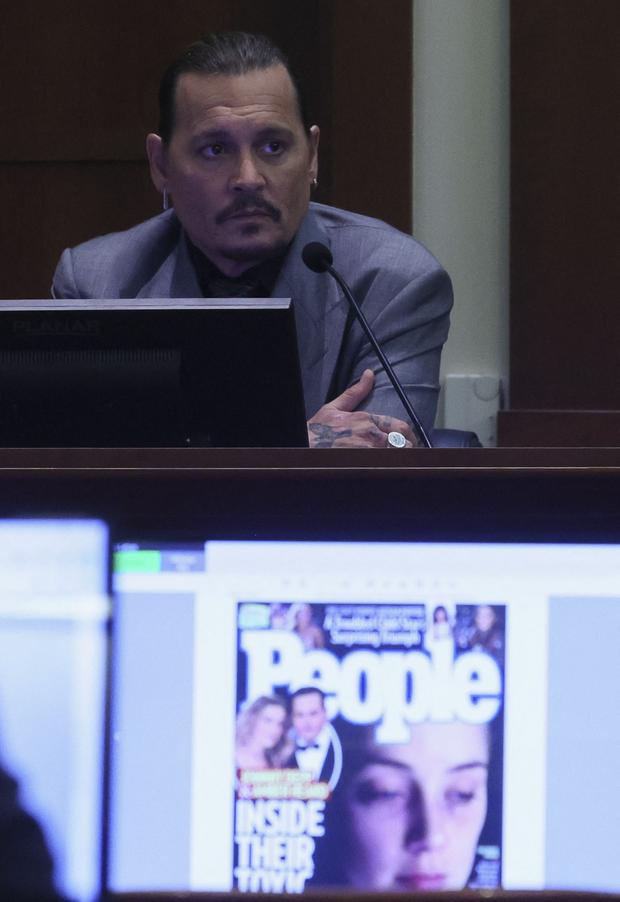 The trial facing Johnny Depp with Amber Heard is letting you watch episodes full of violence experienced by the actors how long they were married. From heated discussions to mutual physical attacks, which both deny, are the details that have become known in the legal battle for defamation that began the protagonist of “Pirates of the Caribbean” against his ex-wife, who in 2018 wrote an article for The Washington Post, in which she defined herself as “a public figure representing domestic abuse”and although he did not name the actor, everyone understood that it was him.

MORE INFORMATION: The time Johnny Depp lost part of a finger in a fight with Amber Heard

The Hollywood star pointed out that as a result of the accusations he lost many projects and saw his life affected, for which he sued the actress for US$ 50 million. Now that she has finished giving her version of events for four days, we present to you the most shocking and shocking phrases that came to light, in a trial in which recordings of the fights that the then couple had were played.

It is worth mentioning that this is the first time that the ex-husbands have faced each other in court, because in the 2020 trial in London, in which Deep lost, the “Aquaman” actress came only as a witness for the accusation what he did against the British newspaper The Sun, which described him as a “wife beater”.

MORE INFORMATION: So are the penthouses where Johnny Depp and Amber Heard lived their stormy relationship

With this phrase said the last day he took the stand, the actor announced that he had been a victim of domestic violence at the hands of Amber Heard. This shortly after playing an audio in which the actress is heard telling Depp: “Tell the world, Johnny. Tell them: ‘I, Johnny Depp, a man, am also a victim of domestic violence and you will see how many people believe you and take your side’ “.

After these words, his lawyer asks him what his answer was. He points out: “I say yes, I am”.

MORE INFORMATION: Johnny Depp and all the partners that the actor has had in addition to Amber Heard

Another audio revealed a discussion of the couple in San Francisco after the accusation that Herad made against her ex-husband. Depp agreed to meet with her in the hope that he would take it back, but realizing that he had summoned him for another reason, he decided to confront her and blamed everything he had lost.

He recognized that he had brought a knife and took it out saying: “You have taken everything from me. You want my blood, take it”. At this point, she clarified that she never thought of hurting her ex, but was referring to her own blood, which was the only thing she did not have.

3. “I did not want to reveal that it was Mrs. Heard who threw a bottle of vodka at me and then cut my finger”

The famous actor revealed that, in March 2015, when they had been married for just a month, he suffered a cut on his finger from broken glass, after Heard allegedly threw a bottle of vodka at him. At that time, he preferred to remain silent and ensure that he had injured his finger when he hit a door.

“I did not want to reveal that it was the mrs heard the one who threw a bottle of vodka at me and then cut my finger (…). I didn’t want to get her in trouble. I tried to make things as peaceful and easy as possible for everyone.”he pointed.

MORE INFORMATION: “The Rum Diary”, the film in which Johnny Depp and Amber Heard worked

Four. “He put out a cigarette in my face”

Also, in that altercation in Australia, Depp announced that Heard also put out a cigarette in his face, something that was shown with images in the trial, where a dark spot is seen on his cheek.

“I see a detail that I had forgotten. Miss Heard had taken my cigarette from the ashtray and stubbed it out in my face.”he stated.

5. “On my side of the bed there was human fecal matter”

In April 2016, the actor, taking advantage of the fact that his ex-wife was traveling, wanted to collect his belongings from the house they shared, but when he called the head of the building’s security, he told him that it was not a good time.

“He showed me a picture on his phone of… it was a picture of our bed, and on my side of the bed there was human fecal matter. I understood why it was not a good time to go there. My initial response was, I mean… I laughed (…). It was so strange and grotesque that I could only laugh. So I didn’t go there that day.”accurate.

6. “The only person I have abused in my life is myself”

When Heard’s legal representative asked Depp about his drinking problems and how this had directly affected his then-wife, he was blunt and direct.

“Lord, if anyone had a problem with my drinking, at some point in my life, it was me. The only person I’ve ever abused in my life is myself.”answered.

7. “I never got to the point of hitting Mrs. Heard”

Although Johnny Depp acknowledged that he frequently fought with his partner, he assured in court that he never physically assaulted her. “I never got to the point of hitting Mrs. Heard in any way nor have I ever hit any woman in my life.”.

He also clarified that the time Amber accused him of injuring her nose, it was because her head collided with Heard’s forehead when he was trying to calm her down. “There was no intentional header”he indicated.

8. “One day you are Cinderella, so to speak, and then in 0.6 seconds you are Quasimodo”

Acknowledging that his career was greatly affected, he said that neither he nor his entourage should have suffered from his ex-wife’s accusations.

“One day you’re Cinderella, so to speak, and then in 0.6 seconds you’re Quasimodo. I didn’t deserve that either, and neither did my children, nor the people who had believed in me all these years (…). But, I couldn’t feel ashamed, I was doing the right thing (…). I would be a real fool not to think that there was an effect on my career based on Mrs. Heard’s words. Whether they mentioned my name or not.”said.

9. “She wanted to keep it to continue the fight”

The couple’s therapist Laurel Anderson revealed in July that when the actor preferred to withdraw to calm down, the actress did not allow it. “If Depp was going to leave to de-escalate the fight, she would hit him to keep him there because she would rather be in a fight than have him leave.”because according to him he was terrified of abandonment.

However, he acknowledged that both lived a toxic relationship. “Both were victims of abuse in their homes. I think he was kept in check for decades until he and Heard got out of control and they got into what I saw as mutual abuse.”.

JOHNNY DEPP AND AMBER HEARD TOGETHER IN “THE RUM DIARY”

“The Rum Diary” (“The diary of a seducer”, in Spanish) is an American comedy-drama film that was written and directed by Bruce Robinson, based on the 1998 novel by Hunter S. Thompson. It starred Johnny Depp and Amber Heard, as well as Aaron Eckhart, Michael Rispoli, Richard Jenkins and Giovanni Ribisi.

Recordings began in March 2009 in Puerto Rico and it was released on October 28, 2011. The budget to make the film was US$45 million, but it only managed to raise US$30 million.

What roles did they play in “The Rum Diary”?

Johnny Deep plays Paul Kemp, a writer who has failed to sell a book and finds a job at a newspaper in San Juan, Puerto Rico, and Amber Heard plays Chenault.

In fiction, he meets the girl, one day when he was on a boat in the sea and sees the woman bathing naked. This causes him to immediately fall in love with her, but there is a catch, he is engaged to Hal Sanderson, a real estate agent, who offers Kemp a job writing ads for her latest company.

Johnny Depp and Amber Heard: the most shocking and shocking phrases of the trial