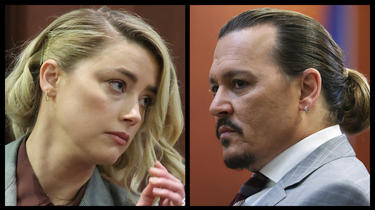 After six weeks of all-out testimony in a defamation lawsuit that has lifted the veil on the toxicity of their former relationship in the eyes of the world, Johnny Depp and Amber Heard are on the cusp of knowing the jury’s decision in this case, but also to know the repercussions of the event on their respective careers.

The future of the two actors is now in the hands of the jury, but Amber Heard and Johnny Depp will also have to live with the consequences of their ultra-publicized trial, which will not be without consequences for the rest of their professional career. Because the verdict of the court will fall, followed by another, that of public opinion and, in its wake, that of Hollywood producers.

For the record, Johnny Depp is suing Amber Heard for $50 million. He claims his estranged wife implied he abused her in a 2018 Washington Post op-ed on domestic violence (although the article did not mention it by name), and that this “defamation” caused damage to his career.

Faced with this accusation, Amber Heard counter-sued the actor for $100 million, accusing Johnny Depp of orchestrating a “smear campaign” against her and describing this lawsuit against her as a continuation of “abuse and of harassment”.

Amber Heard testified that Johnny Depp was verbally and physically abusive. She also accused Depp of sexual abuse during their relationship.

Johnny Depp repeatedly claimed on the stand that he had never hit a woman, denied the sexual assault allegation and called himself a victim of domestic violence at the hands of Amber Heard , which she denies.

Public opinion can condemn to a crossing of the desert

Whatever the verdicts of the Johnny Depp lawsuit and Amber Heard’s countersuit, the fate of their respective careers will (mostly) be dictated by another “court”, that of public opinion.

Whether fair or unfair, the outpouring of support Johnny Depp has received on social media during the trial could stand him in good stead in the future, he told CNN an agent “who has known the actor for years”, is it specified. “I wasn’t sure what to expect before he spoke and I think it only improved his public image,” he said.

“Robert Downey Jr. had won an Oscar and then broadcast his personal life to the world and people kind of backed off,” said Darryl Marshak, still for CNN, an agent who has previously represented stars like Leonardo DiCaprio. . “I think Hollywood is a weird place. When you wash your dirty laundry in public, the executives, and all the people who move the pawns (in the cinema industry, editor’s note), tend to recoil as before a hot flame. He then nevertheless felt that the “incredible talent” of Johnny Depp would help him return to the cinema screens. “Hollywood is indulgent and when the time has passed a little (…) Johnny can come back. I think it will reappear,” he said.

Throughout the case, Johnny Depp and his lawyers tried to prove the negative impact of Amber Heard’s statements on her career. In 2020, he had his role as Gellert Grindelwald in the ‘Fantastic Beasts and Where to Find Them’ franchise removed after losing a domestic violence defamation case against The Sun which called him an ‘abusive husband’.

Talent agent Christian Carino, however, testified during the trial, which took place over the past six weeks in Fairfax, Va., that he believed Heard’s abuse allegations were the main reason that cost the actor his role as Captain Jack Sparrow in the sixth Pirates of the Caribbean film.

And when a lawyer for the actress noted that Johnny Depp had shown disturbing behavior during filming, he justified: “I know he’s late, but he’s been late all his life.” “I think it’s embarrassing for everyone, but everyone has learned to produce a film to deal with it,” he added.

Tracey Jacobs, who represented Johnny Depp for 30 years as a talent agent before being fired, said, on the contrary, that by regularly showing up late to sets, along with her heavy drug use and of alcohol, had deeply harmed the smooth running of filming, and more generally his career.

“His star doesn’t shine like it used to because it’s become more difficult to find him a job given the reputation he’s gotten due to being late and stuff,” said the former agent. actor.

The actor always guaranteed to have roles

Plans for the sixth installment of “Pirates of the Caribbean” have not yet been confirmed at the time of writing, but according to film producer Jerry Bruckheimer, the door would not be completely closed for that Johnny Depp makes his return there.

According to other specialists in the sector, the future of Johnny Depp in the cinema is not over. “I believe that Johnny Depp will be able to be cast in various independent films because his name still has great value and there is an audience for him, but the studios will be more careful for insurance reasons (…) and they would be more concerned about public reactions than small independent companies,” an unnamed “Hollywood director” also told CNN.

It should be noted that, while his future presence in Hollywood productions is not yet fully assured, Johnny Depp should have a role in the next French film “La Favorite”, in the role of the King of France, Louis XV. As announced in Variety last January, the filming of this drama will begin this summer, and will be directed by Maïwenn, who also plays the role of the sovereign’s mistress, Madame du Barry.

“Overall, people took sides throughout the trial, we saw this play out in the press before it ended in the courtroom,” Amanda K. Ruisi, founder and president of AKR Public, told CNN. Relationships & AKR Ventures.

“Mr. Depp’s legal and strategic communications team has done an incredible job of delivering a consistent message in the courtroom and in the media, which I believe has helped rally support from his base. fans.”

It is also obvious that the social networks have largely tilted his favor, with an inverse proportion of messages of hatred or mockery that fell on Heard, and which also raises a lot of questions about the speech of the supposed victims in the domestic violence.

“Here is a woman recounting, in excruciating detail, how a hugely famous man allegedly assaulted her. Why, in 2022, do so many people seem to hate her for this? “, asks a journalist from The Cut, while Le Parisien publishes this Tuesday, May 31 an article entitled: “Amber Heard, the woman no one wants to believe in #MeToo time”.

Amber Heard, however, has her supporters, but much less vocal than those of Depp. Actor David Krumholtz publicly came to her defense, actress Ellen Barkin testified for her defense team, and comedian Kathy Griffin tweeted: “Thinking of you and sending you all my love.”

Will she appear in Aquaman 2?

As for the future professional of Amber Heard, whose career was less established than that of her ex-husband, the attention brought to her at the trial would have considerably damaged her image. At the helm, the former model said she was the target of a defamatory campaign that fueled hatred: “I am harassed, humiliated, threatened every day (…) People want to kill me and they tell me so every day. days. People want to kill my baby in the microwave and they tell me that,” continued Heard, trembling with emotion.

This hatred, which is difficult to justify, could also cost the next roles of the one who was seen in “Justice League” and “Aquaman”. Currently, there is even a petition for the actress to be removed from the cast of the “Aquaman” sequel, which is in post-production. The petition has even reached a record number of signatures today, with nearly 4.5 million signatures so far!

Will it go so far as to cut it during editing? It’s unlikely, however Walter Hamada, the head of DC Films who produced the film, said the creative team had, before the trial, raised “lack of chemistry” with the film’s star Jason Momoa.

Monday, May 16, Amber Heard testified that her role in “Aquaman 2” had been considerably reduced in the heart of her battle with Johnny Depp. Addressing the court, the actress explained: “I fought very hard to stay in the film. They didn’t want to include me.” She added: “I was given a script and then new versions of the script in which scenes containing action had been removed. It depicted my character and another character, without giving any spoilers, two characters fighting against each other (…) They actually took out a bunch of scenes for my role.” According to testimony from the production house’s head of entertainment, Aquaman lead actor Jason Momoa, meanwhile, was “adamant” that Heard would keep his role in the film.

“Aquaman 2,” which is slated to hit theaters in 2023, is the highest-profile film of the actress’ ongoing projects. Apart from that, she is in post-production on an Italian thriller titled “In the Fire” written and directed by Conor Allyn. According to IMDB, she is set to appear next in “Run Away with Me,” which centers on an American in Paris who falls in love with a model.

Will the verdict that will be delivered by the jury be enough to restore, as they both call it, their reputation, and at the same time to lengthen the list of their projects? Amber Heard and Johnny Depp actually have a lot more at stake than the millions they claim from each other.