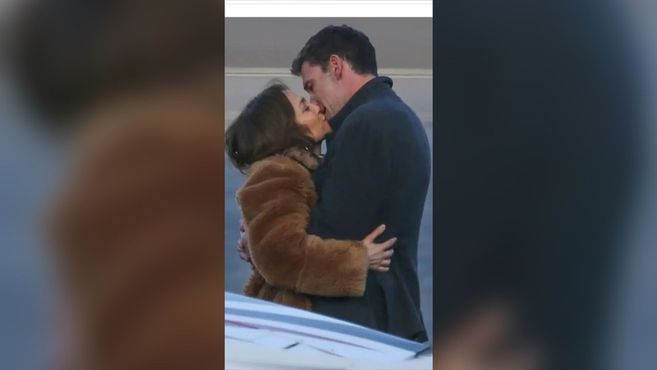 The couple known as Bennifer starred in a romantic scene at the Los Angeles airport, minutes before she boarded a private jet that took her to Canada last weekend and after celebrating Halloween together and enjoying with her children, first separately and then all together, even with his ex-wife, Jennifer Garner, and after a week in which they went shopping and continued to see houses in the city, which is believed to be to live together from next January, the couple again separated for work reasons.

Jennifer Lopez I had to return to the set of The Mother, the series for Netflix in which she is producer and protagonist, which is filmed in Canada. He accompanied her to the airport Ben Affleck, who kissed and hugged her in the middle of a romantic scene, in which many smiles were also seen from both of them.

In the pictures, which were posted by lovers’ fan pages, she is sporting a brown Coach teddy coat, with torn yins, a black leather handbag, and tan UGG boots; and him a blue casual jacket and they detail how Ben would like not to let his girlfriend go and even accompanies her up the stairs to board where they give one last hug and kiss.

You may also be interested: Jennifer López and Ben Affleck meet his ex, this was the reaction

The pair will see each other again when JLo returns to Los Angeles, unless Ben himself surprises her arriving on set in Vancouver. Of course, there are those who say that the star plans to go to Los Angeles every weekend to see her children and of course, her boyfriend, who also takes advantage of working days to work. The movie is shooting in Austin, Texas Hypnotic, under the direction of Robert Rodríguez.