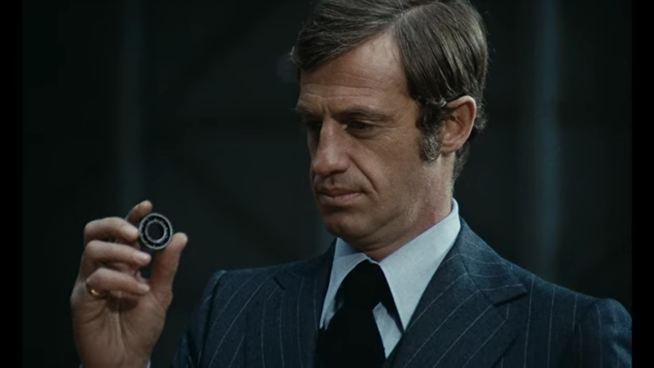 We mainly remember from Jean-Paul Belmondo the image of an actor of action comedies with stunts in spades. Discover another facet of his talent, with 5 nuggets from his filmography.

From his thriller / action period, we most often remember Fear of the city, Cop or thug or even The Professional, but let’s not forget the underestimated L’Alpagueur, a particularly dark film by Philippe Labro, with an autumnal atmosphere, but bathed in American influences.

“L’Alpagueur is a headhunter, a mercenary, an outsider. L’Alpagueur is the trick that a senior official found to get over the police routine. Completely illegal but very effective.”

This dark and enigmatic hero, encamped by a sober Belmondo, finds himself facing a horde of enemies, including a gang of drug traffickers and a serial killer robber, L’Epervier, who has the annoying habit of never leaving any witnesses behind him. This public enemy n ° 1 is interpreted by the magnetic Bruno Cremer, a piercing and melancholy gaze, a former friend of the Conservatory.

Their confrontation recalls the westerns à la Leone, the powerful, pop and lyrical music of Michel Colombier, that of Ennio Morricone. And how can we not think of Sam Peckinpah and his ambush with Steve McQueen when this settling of accounts with shotguns breaks out in this inn lost in the middle of nowhere…?

Finally, we will once again salute the courage of our eternal Bébel, launched in a frantic race behind a tanker truck while sciatica made him suffer martyrdom.

Gangster sentenced to death in absentia and wanted by police, Abel Davos (Lino Ventura) took refuge in Italy with his wife Therese and two children. On the verge of being found, he returns to France, but a shooting breaks out, killing Thérèse but also her friend and accomplice Raymond.

Left alone with his children, Abel calls on his friends Riton and Fargier in Paris to come and pick them up in Nice. They send them a reliable man, Eric Stark. The latter is played by Belmondo, who does not appear until the 39th minute of the film but brings a style of play that no one else has.

His relaxation, his ability to capture the viewer’s attention is phenomenal. After a remarkable first part of realism and without downtime, the rhythm settles down to leave more room for the actors and the relationships between the characters, which is also dear to the director of the film, Claude Sautet.

All risks class is a dark and tormented film, only lit by the character of Belmondo, a true beacon in the twilight and the night symbolizing the fate of Davos.

Another achievement by Philippe Labro, released three years before L’Alpagueur, The heir sees Bébel playing Bart, a daddy’s son inheriting the family fortune upon the death of his parents. Very quickly, we try to compromise him in a drug case with which he has nothing to do: we try to get rid of him!

Then begins an investigation led by Bart to identify the culprits of this plot, who might also have fomented the in-flight explosion of his parents’ plane. Between Charles Denner, Jean Rochefort, Jean Desailly and Michel Beaune, the famous faces of the time follow one another and give life to the characters of this well-crafted thriller.

Bart is both impulsive and violent, unbearable (his privileged thoughts, his relationship with women) but also touching and tormented. Jean-Paul Belmondo is doing it once again with honors thanks to this character with different facets who make him play all the emotions.

After Breathless and Pierrot le fou with Godard, Belmondo turns with François Truffaut and gives the reply to Catherine Deneuve. The story ? Louis goes through a marriage agency to find a wife and he is offered Julie. After correspondence, they finally meet. He waits for her, his photo in hand, but does not see it.

Julie explains everything to him: she did not send a photo of herself but of a woman she considers more beautiful. Louis is charmed. Then begins a romance for better or for worse. Difficult to tell more without spoiling the plot of the film, but their love story will turn out to be more complicated than expected.

The Mississippi Mermaid is held above all by the performance of its principal actors, who are formidable, and the scenario writer adapts its setting in scene to its animals of game. Its realization becomes discreet to better embark us in the history itself and the relation between its two protagonists. Deneuve delights in playing on mystery and intransigence, and Belmondo is brilliant at vulnerability.

Jean-Paul Belmondo at Alain Resnais, here is an unexpected team. He disconcerted moreover the festival-goers of Cannes, who whistled copiously the film, presented in official competition in 1974. A bruise which will mark durably Belmondo, doubly implied in the film, as actor but also as producer. And it was not until 2011 and the tribute of Cannes to the great actor for the wound to heal.

If this hybrid work, constantly oscillating between biting chronicle of one of the most famous fraud cases of the Third Republic and sumptuous historical reconstruction, has something to disconcert by its false joviality, it offers above all a superb setting for its actors .

To Belmondo obviously, but also to the veteran Charles Boyer, to the young Anny Duperey and Gérard Depardieu, and to the friends of the Conservatory that are Claude Rich and Pierre Vernier.

And Jean-Paul Belmondo, there will also remain the countless stunts: