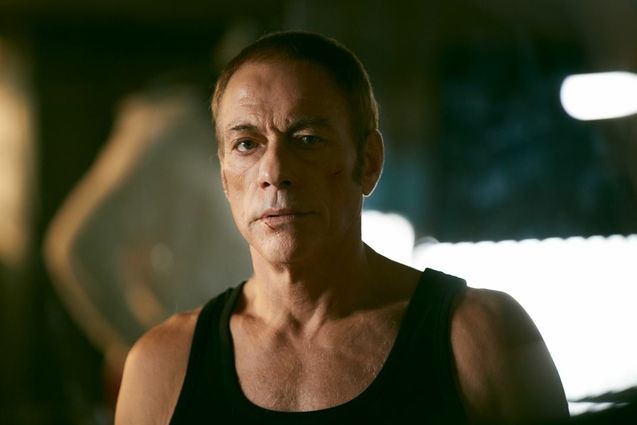 Fans of wide gaps and high-kicks in the molars, rejoice: Netflix is ​​hosting 10 films by and / or with Jean-Claude Van Damme.

Netflix now has a definite weakness for prestigious authors. After having acquired several works by Ingmar Bergman, Jacques Tati or François Truffaut, the platform now hosts a good part of the filmography of Muscles from Brussels, namely The absolute weapon, Full Contact, Timecop, The Grand Tournament, Legionnaire, Inferno, Replicant, The Order, Point d’impact and In hell.

A thick program even if it does not include some great classics like Bloodsport, but who joins Kickboxer already present for a while in the catalog. These additions aim to acclimatize subscribers to the good old JCVD ​​in preparation for the release of the Last Mercenary directed by David Charhon, July 30, 2021.

It is also an opportunity for many film lovers who love castagne to catch up with the gray areas of their cinephilia. Often mocked by French media in search of complacency, sometimes abused by a merciless industry, Van Damme has yet scored his points, his legendary kick and his choices in the history of American action cinema. After having devoted a dossier to the regressive Double Team, we have selected 5 films that prove it.

Back, and not happy

What is it about ? Lyon, a legionary, was stationed in an outpost in the North African desert when he learned that his brother was seriously injured in Los Angeles. He deserts to help him, but, without money, embarks on full contact fights. When he finally arrives, weary, his brother is dead and the widow refuses his protection, while two rampaging mercenaries want to force him back to the Legion.

Why it is to (re) see: Don’t be fooled by his legendary poster, where JCVD ​​appears doing the splits on a railroad track as a train rushes towards him, since the muscle of Brussels will never perform this stunt during the film that interests us. No, for Full Contact, Jean-Claude wants to risk stepping out of his comfort zone. Indeed, while the synopsis called for a vengeful and ruthless tale, the martial artist wants to infuse it with another tone, focusing on the life story of a renegade in spite of himself, who launches headlong into clandestine combat. 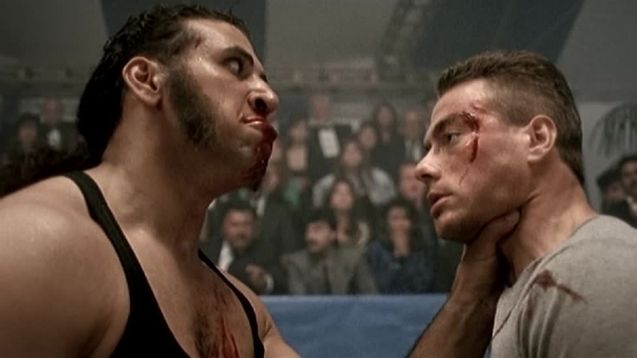 Jean-Claude may be early in the morning, he hurts

Consequently, the jousts covered with aerial kicks never count as much as the context which they describe, even the decoration which is theirs. Lyon follows his comrades in misfortune to get rid of them, here in an emptied swimming pool, there in a parking lot. Sheldon Lettich, the director, not quite Orson Welles, but is well aware that he must film his actor like never before, who has remained glued to his face.

So of course, neither the cutting nor the interpretation show an overflowing finesse, but it doesn’t matter, the feature film is all the more generous as one feels Van Damme totally invested in it, overplaying everything, giving space. at the slightest emotion. 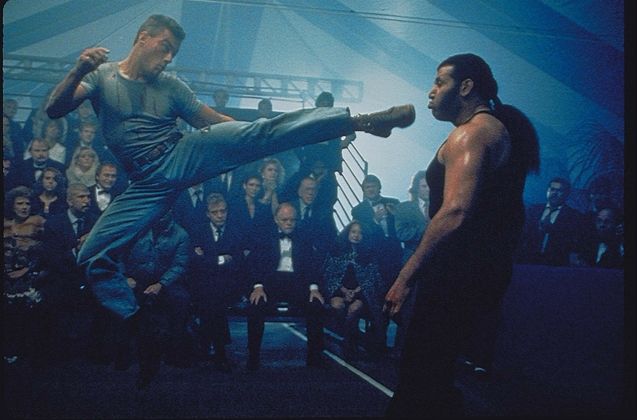 Jean-Claude goes out of his way

What is it about ? In the year 2004, man finally knows how to travel through time, generating a new breed of criminal speculators. The United States therefore created the TEC, an elite unit tasked with controlling all temporal displacement. But his own agents are not immune to temptations and Agent Max Walker is tasked with bringing back a deserter …

Why is it to (re) see? American action cinema of the 1990s kept repeating its old glories. Obvious mix of Terminator and Universal Soldier, in which Van Damme was already dabbling in science fiction, TimeCop is inspired by a Dark Horse comic book to find its place at the box office.

Behind the abs, a little beating heart

And it’s mission accomplished ! Not only has the feature film been a well-run business, with a revenue exceeding $ 100 million for a budget of $ 28 million, but it has definitely demonstrated to American producers that its star is not just good at demonstrations. martial arts, and that he had enough to star in big genre films. The rest of his career will prove it: this popularity is double-edged.

If it continues to forge its identity thanks to its legendary shots, such as the high kick and the splits, here transformed into iconic images in two shots which are no less so, JCVD ​​is integrating better and better with the products. Hollywood, a real delight for lovers of temporal paradoxes, Timecop combines many hobbies of mainstream cinema of the time, with its corrupt police, its crooked political villain, its aesthetic all twisted laboratories and beautiful American houses, its themes of mourning and (especially) redemption. However, far from being completely absorbed by the system, the actor manages to give the change, especially in a generous climax. 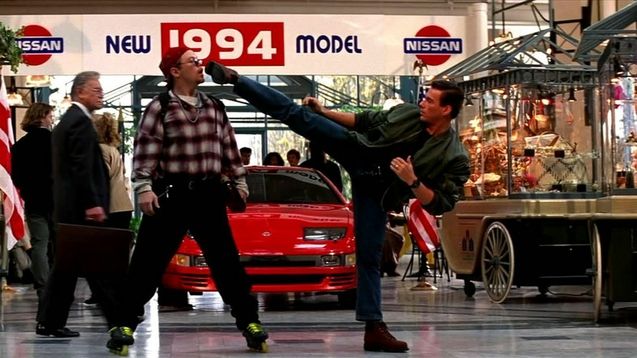 Talk to my foot

What is it about ? 1925, New York. Christophe Dubois is a street acrobat / protector of a gang of orphans. Unfortunately, the theft of a gangster briefcase goes awry, and Dubois is forced to stowaway on a ship bound for the Far East. Reduced to slavery, he was freed by Dobbs and then immediately sold to a group of Muya-Thai fighters. A past master in this martial art, Dubois becomes an excellent underground fighter, and crosses paths with Dobbs with whom he embarks on the Grand TournoI.

Why is it to (re) see? And 1995, Van Damme se sent weary of the stuffers. Obviously, delivering mandals has opened the doors to success for him and they only stay open thanks to series of back kicks. 1994 had given him two hits worth more than $ 100 million each at the global box office (Timecop, Street Fighter), and 1995 had started on Sudden death, son Die-Hard-like, but Jean Claude wanted to move on. As early as 1991, he had started the production of Enter The New Dragon which will then become The Quest or The Grand Tournament in French, which he described in 1993 as the “Ben Hur karate film. ”Van Damme will end up directing it himself.

“Listen to me, Freddie Mercury …”

Result? We must already highlight the achievement of Van Damme, all in classicism and contemplation when he walks us between New York and the Thai countries, but who is more nervous and cut up when it comes to fighting. Alas, if the staging wants to remind good memories of adventure films inhabited by an epic breath, we are still a little bored.

Van Damme is of a papal seriousness, supported by an all-round first degree that prevents forgetting that this is a remake of Bloodsport – All shots are allowed at 30 million instead of two. Only consolation, to cross Roger Moore who plays the quota “phlegm and bonhomie” with the investment of a man in a hurry to pay his taxes. 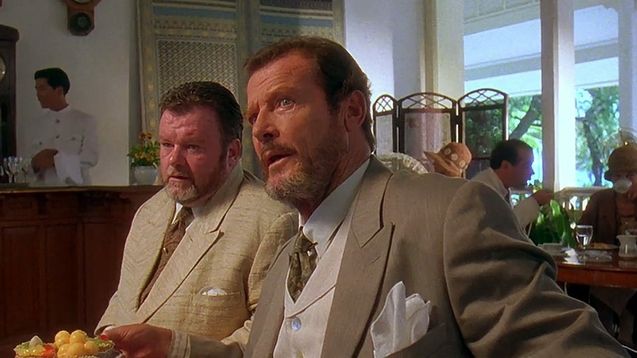 “Did I hear correctly, we just talked about dough?”

What is it about ? 1924, Marseille, boxer Alain Lefebre refuses to go to bed in a fight, opposing the local underworld. His only way out: to join the Foreign Legion. A few weeks later, he finds himself under the dodger of the Sahara undergoing intensive training. He will find friendships there, will face adversity and especially the Berber rebels.

Why is it to (re) see? In 1998, when the film was released, it was not in great shape for the muscles of Brussels. Double Team and Trap in Hong Kong have both been critically sanctioned as the box office. Jean Claude would need to rebuild his cinematic health and on paper, Legionnaire could look like that golden ticket to the chocolate factory. 30 million dollars budget, a classic story, but in the right lineage with certain classics, full of heroic values ​​and frank camaraderie … JCVD would prove that’he was more than a muscular body, he was a real dramatic actor. 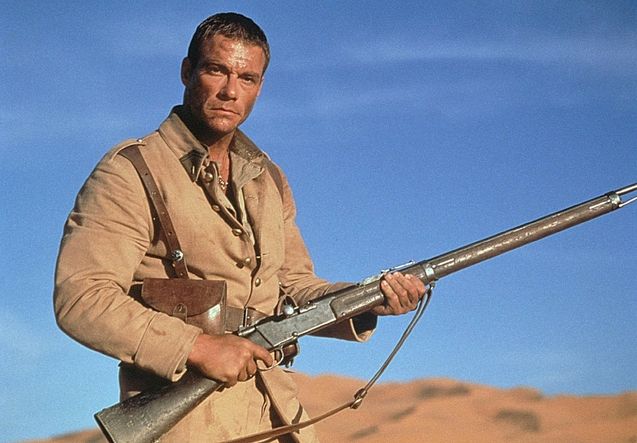 Well, in the end, it’s a nice necklace of clichés strung like pearls. Everyone is super manly mega, wondering how the pants of these gentlemen can contain their testicles. The characters each embody an archetype seen a thousand times in other military films, but it gives the opportunity to meet Steven Berkoff (Octopussy, Outland … far from the land) and Adewale Akinnuoye-Agbaje (Oz, The Return of the Mummy).

Van Damme does everything possible to be crossed by noble feelings and other contrary passions, but his sweat is more expressive than him. The action scenes are relatively effective, Peter MacDonald being the author of Rambo III whose only quality was undoubtedly… the action scenes. We can deplore the lack of large gap, but rest assured, we still see the buttocks of JCVD ​​at one point.

What is it about ? To stop a serial killer who does not share Simon Riaux’s love for mothers, the NSA creates a clone for him. The cynical inspector Jake Riley, who has been tracking the criminal for years, will therefore have to put up with this stupid idea.

Why is it to (re) see? Replicant perfectly symbolizes Van Damme’s contribution to American entertainment. Great admirer of Hong Kong cinema, linked from the start of his career to the British colony (Bloodsport was filmed there), he is one of the few to have frankly encouraged the exodus of these virtuoso filmmakers to Hollywood. So some of his most famous and crazy movies are directed by legends like John Woo (Manhunt), Tsui Hark (Double Team, Trap in Hong Kong) or Ringo Lam as here. 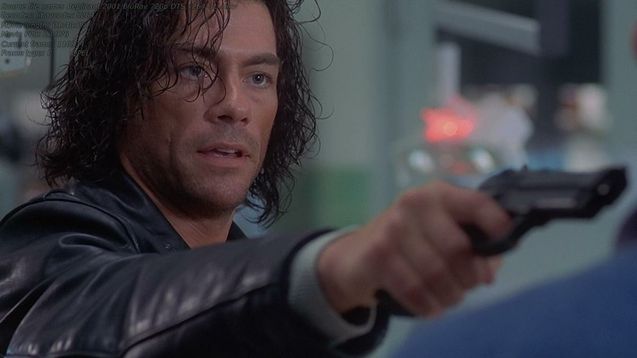 It lacks a bit of mullet

The latter has collaborated three times with the Belgian, for Maximum risk (1996), In Hell (2003) and finally this Replicant released in 2001. Unfortunately, it also crystallizes the limits of the Hollywood adventures of these directors. Handicapped by a mind-bogglingly stupid scenario (even the characters don’t believe it), written to confront the actor and his double in the last act, the author of Full Alert improves the thing thanks to an applied staging, but stands alone. A sad disrespect, and another missed opportunity.

However, this obscure story has for him to allow the castagneur film lover to play two very different roles. And he’s not doing so badly, helped by the always brilliant Michael Rooker, perfect as a cop obsessed with his target. In fact, his athletic skills are not highlighted very much. And it’s not worse: if he persisted in importing these aesthetes to Uncle Sam, it is also to get him out of his comfort zone (although relations between them were sometimes stormy). And it is successful.