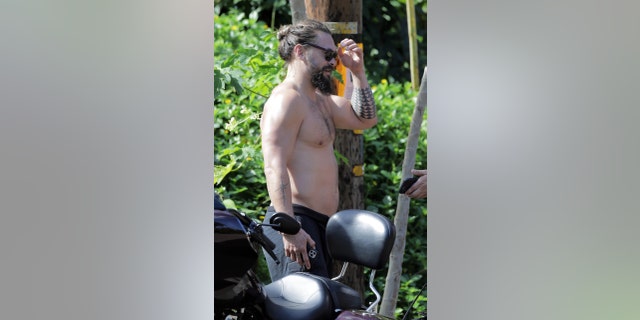 Jason Momoa was recently spotted taking a refreshing dip in Hawaii, where he soaked up the sun during the holiday season.

The shirtless 42-year-old then hopped on his motorbike to show off his perfectly chiseled physique and body art. The actor, who initially kept his superhero mane tousled, then went for a more practical bun.

Momoa has relaxed in his home country after wrapping up filming for the ‘Aquaman’ sequel this month. He took advantage of the beauty of the Pacific by paddling, swimming and surfing.

Jason Momoa rested in his home country after filming “Aquaman and the Lost Kingdom”.
(MEGA)

In October, Momoa confirmed rumors that he was injured on the set of “Aquaman and the Lost Kingdom” during his appearance on “The Ellen Show”.

“I’m getting old,” the actor replied when asked about the rumors by host Ellen DeGeneres.

“I messed up my eyes,” Momoa admitted. “I just had something in it that cut it a bit, and then I have to have an operation, I have a hernia, I have ribs. I’m just getting beat up. “

“It’s going to be a great movie, you’re going to love it,” he added to reassure the audience.

Momoa is no stranger to getting hurt. The actor previously revealed that he broke his femur and injured his face, leaving a scar. Momoa was also hit by a stuntman while filming “Braven” in 2018.

“I was knocked out”, explained the actor, quoted by Yahoo! News. “A stuntman hit me. He caught me off guard. We didn’t make eye contact, and he hit me before I could grab him, and everything went black. “

The 6’4 ″ action star has previously credited the “genetics” of her sculpted body ready for the camera.

“Hawaiians are great people,” he said Men’s health in November 2020. “I do a lot of rock climbing. Maybe I am a monkey. I like the way it feels. I like to be upside down. I always loved climbing trees as a kid and swinging in the breeze. But lifting weights is a challenge. “

His wife, Lisa Bonet, is more interested in Pilates and yoga, which has proven to be a challenge for Momoa.

“So I tried yoga the other day, and it was the hardest thing I’ve ever done in my life,” Momoa admitted. “I prefer to squat in a car. Climbing to El Capitan would be easier than doing two hours of yoga. I can no longer bend! My hamstrings are so tight. It is pathetic. I remember one time when I was all harnessed up during ‘Conan the Barbarian’, and I was in a yoga class with these older ladies in Topanga and everyone just put their arms up and I was like, [screams] ‘It’s so difficult!’ ”