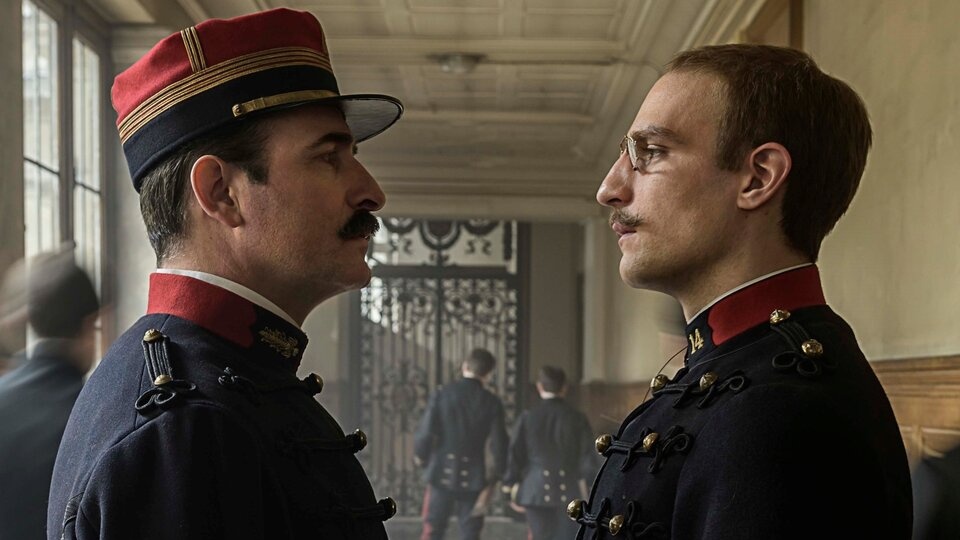 I accuse – The Dreyfus affair 7 puntos

Premiere: in rooms only.

January 5, 1895. In the majestic parade ground of the Military School, in Paris, with the Eiffel Tower in the background, the artillery captain Alfred Dreyfus is publicly demoted, not only in front of soldiers and officers but also in front of a mass blind woman who insults him from behind bars, as if they were bloodthirsty Roman circus attendants. Convicted by a military court that found him – “in the name of the French people” – guilty of high treason, the man screams his innocence, but no one listens to him. They strip all the attributes of his uniform, as if they were stripping him. An officer follows this humiliation ceremony in detail with binoculars and coldly comments to his comrades in arms: “He looks like a Jewish tailor crying over lost gold.”

The prologue of the most recent film by Roman Polanski –winner of the Grand Jury Prize at the Venice Film Festival 2019, in the same edition that dedicated to the Joker starring Joaquin Phoenix- raises his themes in an exemplary way, with great synthesis and eloquence. The terrible weight of the institutions on a dwarfed and defenseless man is felt in these overwhelming general shots. In the same way, the prejudice that dragged him into that ritual of derision is clear: anti-Semitism.

From there, Polanski and his screenwriter Robert Harris make a wise narrative decision: Dreyfus (Louis Garrel), sent by the very fact to the isolation prison of Isla del Diablo, to prevent him from continuing to exclaim his truth, he becomes just a shadow, in a disturbing out of field. The protagonist instead will be Colonel Picquart (Jean Dujardin), the same one who makes that hateful racist comment and who – paradoxically – will be in charge of reopening and deepening the investigation that will end, a political and social scandal through, with the rehabilitation of Dreyfus, eleven years later.

Polanski – just turned 88 – narrates in a classic, elegant and fluid way, particularly during the first half of the film’s more than two hours. With Picquart appointed surprisingly, even for himself, in charge of the Military Intelligence Service, his investigation gives rise to a sustained police intrigue, where the antihero gradually discovers – out of a sense of professional duty rather than his thirst for justice – the iniquity committed against Dreyfus in the name of reason of state. Everything in his path expresses the putrefaction that nests in the Army corps, from the sordid dependency where injustice was forged and that he now occupies, to the pustules that corrode the skin of his predecessor in office, corroded by syphilis. And in society, there is little and nothing of the carelessness and gallantry of the so-called Belle Epoque, except the nostalgia for some “Déjeuner sur l’herbe”, in the idealized way of Claude Monet.

With a true story littered with trials and appeals, it was difficult however J’accuse –Even avoiding the initial process- could avoid falling into the usual legal drama, which roughly occupies an important part of the second half of the film. It is there when the police investigation becomes palatial intrigue and where the solid initial classicism -which refers to the nineteenth-century novel model that Polanski was able to translate so well into his version of Tess (1979) – it gets a little too academic. This happens, in part, due to the excessive underlining of the music of Alexandre Desplat and another due to the display of histrionics of an impeccable cast, but which also carries the burden of having eight members “of the Comédie-Française”, such as they are mentioned in the credits, in the manner of the old French “cinéma de qualité” that Polanski always defended against the parricidal irruption of the “nouvelle vague”.

As for the alleged identification of the author with his agonist Dreyfus, and his consequent victimization, there is nothing in J’accuse that can give rise to that interpretation, except perhaps a diffuse questioning of public opinion, which usually condemns before justice itself does so, and which even conditions it. On the other hand, there is a clear link between J’accuse with Polanski’s previous work and is in the growing paranoia that is taking hold of Colonel Picquart. And in the fact that –as happened with the protagonists of Rosemary’s baby, Chinatown, Frantic search O The hidden writer– the paranoid are often right. Conspiracies exist.

To read more on the subject: