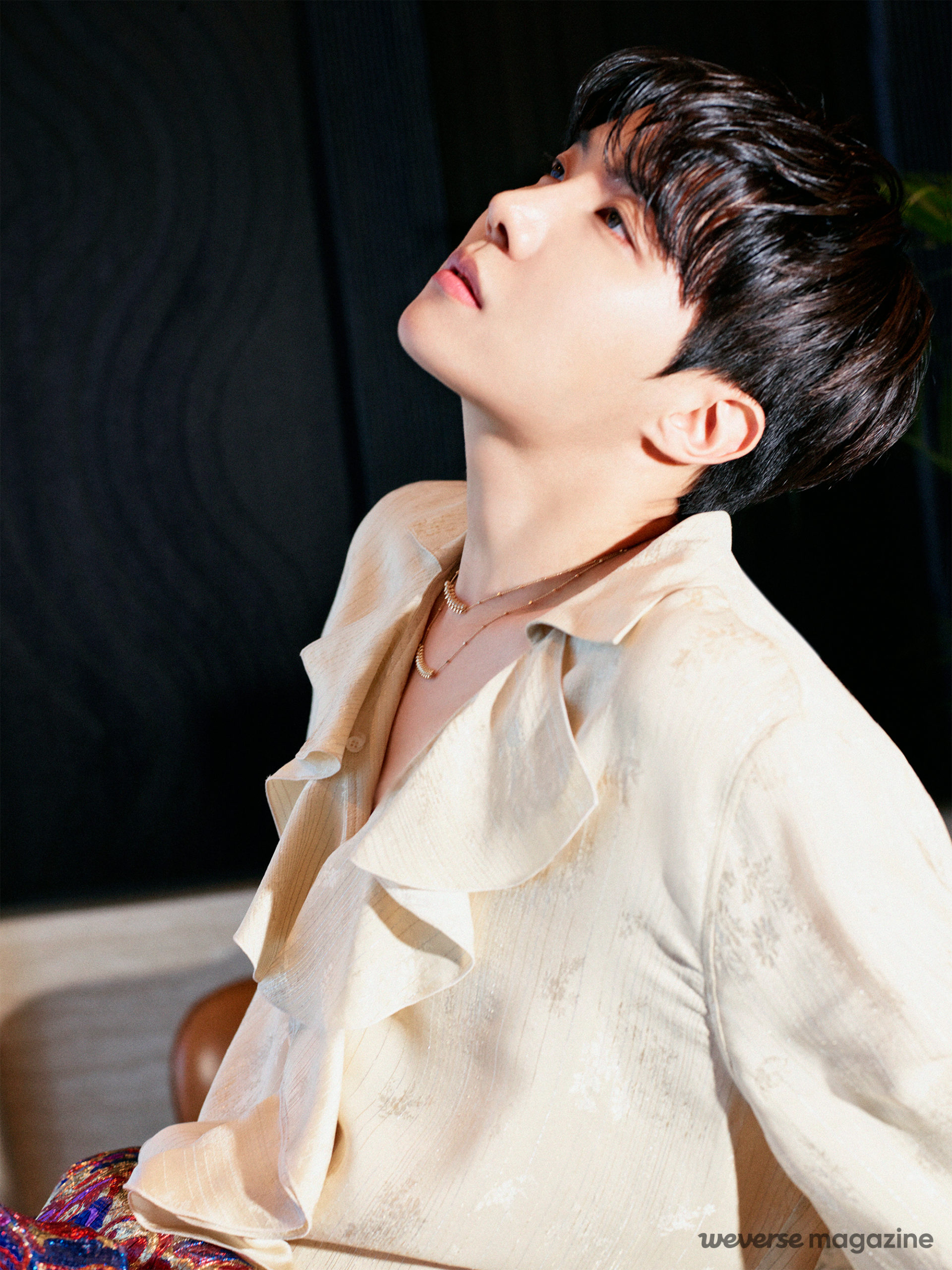 Weverse’s official magazine recently conducted a series of interviews with the members of BTS in connection with the release of the group’s new album.

After Jin, Jungkook, it’s j-hope who did the same. Selected pieces.

The song “Run BTS” is a throwback to how far BTS has come. You greet the other members saying they’ve all been through a lot. (Laughs)

j-hope: “They really went through a lot. That’s a fact. (Laughs) We’ve all been through a lot and worked hard. So I compressed all these things into one word – gosaeng – to express it, and put an “s” at the end to make gosaengs. We conveyed many different messages with each of our albums, from “what is your dream” in the ‘school trilogy’ to today. But then I wondered: have I ever really conveyed a message to the other members? So when we were working on the album, I told them that I wanted to include something where I could say what I think to other people. What came out of that process was “Run BTS,” and I wanted to make it a shout out to the other members.”

Shouldn’t you also do it about yourself? Saying you’ve been through a lot too? (Laughs)

j-hope: “I’ve been through a lot, but I think I may be the one who gets the most pleasure from what BTS is doing. Because, thanks to BTS, I can experience things that I would have wondered whether or not I could accomplish on my own. We’ve done so many different kinds of performances on stage and tried and experimented with a lot of things too. So I took a meaningful look at all these periods of the past. Everything from learning, to mastering what I learned, to experiencing different cultures abroad was so much fun.”

Has being in the band had an effect on your daily life? You posted some great photos on Instagram. You’ve taken a collection of instant film photos and posted them all together as a sort of exhibit.

If someone accesses your Instagram account, they can see all the snapshots you have taken at a glance, and if they look at them separately, they can also see other related photos. For example, you posted a photo of your clothes only, followed by what you wear and your normal daily life. It seemed to me that you were trying to express yourself visually.

j-hope: “You are right. Instant photos are one of the few ways to keep a record where only you can keep the originals. Even though I was going to share my daily life via Instagram, I thought it would be nice to have a film copy that would belong to me and me alone, so I chose instant photos. So I posted them, but I thought there was a limit to what I could convey through analog alone, so now I’m covering my Instagram with photos more suited to the modern era. I wanted to show casual photos that I used to take of myself in many cases, but now I also want to show who I am as an artist. I want to use Instagram to show who I am as an artist and use Weverse to say the most honest and open things I want to say to fans. So maybe that’s why my image on Instagram looks so different from before.”

Does this interest extend to videos? Because you’re still filming and editing.

j-hope: “One thing I’m really grateful for when they’re filming our group’s documentaries is, I think you could say, I’m having the greatest time in life right now. And I’m so grateful that they keep track of that. They record my life, my daily life and my emotions on stage. This is why I attach so much importance to keeping them. And so I take a lot of photos and videos with my phone, but then my phone’s photo album gets so messy. So I started editing to reduce clutter. I usually make each file two or three minutes long.”

Do you ever review the videos you have taken?

j-hope: “Yes. I watch them so, so much. (Laughs) It’s so much fun. Videos like this remind me of how I felt when I made them. I remember the emotion I felt when taking a video or a photo of certain landscapes or certain people, each one of them. Like reliving those feelings when I see what I was thinking about in 2017 every time I revisit them. I think there’s a limit to what people can capture and store in their memories. I mean, you can’t remember everything, and you also forget some things. But when I watch videos from the era, it’s like I’m smoothing over those old crumpled memories and feelings. And I really like that.”

j-hope: “They are beautiful. (Laughs) I was younger and more energetic. It’s not that I’m not like that now – I just think there were definitely things I could only feel back then. One thing with Proof is that it shows how I was working at the time, the kind of music and performance I was doing, and everything I accomplished. Something that makes me say, I remember those days, means so much to me.”

A lot has changed between the days of j-hope that created the version of “DNA” and the j-hope we have now. How have you changed, exactly?

j-hope: “A recent example would be how all my time abroad has influenced me. You couldn’t pay to have the experiences I’m having now. We put on huge performances, meet all kinds of different artists and learn about the culture.”

You already mentioned one of Lady Gaga’s performances on V LIVE. How did his performance make you feel?

j-hope: “I was so inspired by the performances in Las Vegas that I wished I had watched more concerts from artists on our own tour before. Lady Gaga’s concert was particularly impressive. I’ve been a huge Lady Gaga fan since I was young and thought she was the best when it came to putting on a show. I was so inspired by how she is clearly dedicated to her performance. And Las Vegas is a city of shows, so I kept feeling good, I didn’t even know it was possible, while watching all the performances, and I thought I’d like to try them with my own interpretation one day.”

Do you ever feel overwhelmed by some of the things you go through because you’re in BTS? Wanting to give speeches at the UN and perform there can be a great honor but potentially overwhelming at the same time.

j-hope: “It was such an honor to be able to stand there, but honestly, I’m just an extremely ordinary person. I had a typical upbringing as a native of Gwangju, so some things are not easy to accept or get used to. Some things are too big for me and I end up with too much on my plate, but I think I’m able to take it on in the end because it’s divided seven different ways. And I also see that as fate.”

It reminds me of how you chat with other members on Instagram and give a lot of likes. Is this a reflection of how much you all need each other?

j-hope: “Oh, that. It’s because one of them always posted something right before I opened Instagram. (Laughs) It’s amazing how it works. I open Instagram and someone posted exactly three minutes ago. When I see that, I hit the little heart. (Laughs) I have a lot of fun doing that. I think following their daily lives there helps me find out things I didn’t know before about how they feel about their own lives.” 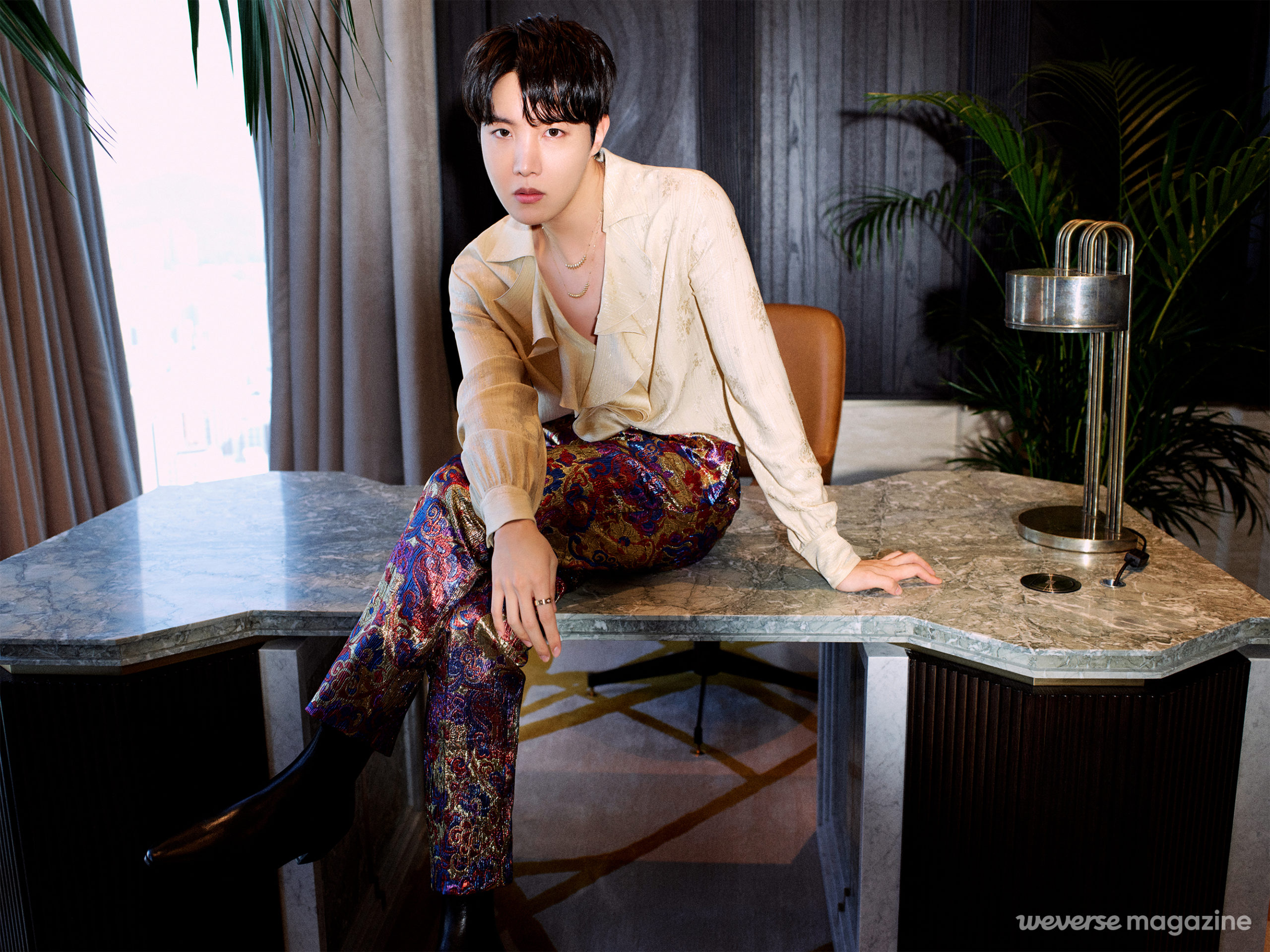 You were heavily influenced as a member of BTS while gradually changing as an individual artist. What would you like to express with your music or dance these days?

j-hope: “As you know, I often show up with a positive, upbeat attitude. So I have a strong desire to show another side of me. I have personally challenged myself to do so in my current projects. I would like to show an extremely dark and raw side.”

j-hope: “During my work and life time, I have come to realize that the stories I can tell are extremely limited when I only use my natural style or how people see me. I have things I want to say, but I always felt like if I did them in the same style that I always have, they wouldn’t go down well. If I was to convey the things I wanted to say, I would have to be darker. This is something I had never done before, so I was excited to try something new. I was strongly influenced by what my heart was telling me, and that’s why I decided to give it a try.”

When it comes to BTS music, you decide what to do based on how things are going overall, while it seems like you make the decisions in your solo work.

j-hope: “When I look back now, I used the mixtape I released to show what I was like as j-hope, the member of BTS. I wanted to use the mixtape to paint a bigger picture of the style I bring to the table within BTS. “Chicken Noodle Soup” showed that I could do something that way, and now I’ve decided to show the kind of new musical direction and thoughts that I have and how I can convey them in a new way. I think now I definitely continue to create the style that I have within BTS as well as my own style that I can show individually. I almost feel embarrassed to call myself an artist (Laughs) but I think I’ve become the kind of artist capable of that.”

What do you want to talk about, as a person and as an artist capable of all this?

j-hope: “From myself. I wanted to go back to things, like how I lived and what kind of emotional shadow my dark side casts. You’ll understand when these songs come out later, but if I were to discuss these things, I couldn’t always be lighthearted about it. That’s why I moved a little closer to a darker place, which I think allowed me to fully open up about my life story.”

What stage in your life story do you think you have reached?

j-hope: “I’ve realized these days that I can’t always be a salmon, fighting against the current. (Laughs)”

What do you mean ?

j-hope: “I think a lot about how I should live my life going with the flow. I strive to have a happy life according to what I have been given. To be honest, I tried to change a lot of things in 2020 and 2021 – the many different things that happened because of the pandemic. But the thing is, when I realized that I couldn’t change all those things just by thinking about it, I thought about living according to what had already been given to me. Because I’m going to find the path that suits me anyway. That doesn’t mean I’m going to stop. (Laughs)”