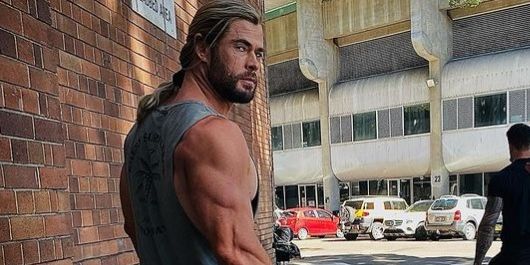 In life some things are obvious: the grass is green, the water is wet and celebrities have to put up with the more or less fortunate comments from their haters. And this time it was the Australian actor’s turn Chris Hemsworth on account of the appearance of their legs. Neither Thor get rid of criticism!

After posting a picture on his instagram account, taken on the set of Thor: Love and Thunder, Together with his son by the hand, the comments on social networks did not wait. First by the brutal size of his triceps, and second, by the appearance of his legs, much less developed than his upper body. “Thor has skipped the leg day “, commented one of his followers; and another stated that “probably Superman would not skip leg day”, in relation to his son’s comment that assured Chris that his favorite superhero was the flying hero of the cape

To be honest, we’ve all skipped leg day for a few weeks, but being a Hollywood star we can’t allow it … Lower body day is sacred, or else you’ll end up looking like a flamingo. Hemsworth, 37, has been building a lot of muscle for months for the new Thor and Netflix biopic about wrestling star Hulk Hogan. But it seems that a lot of cane to the legs has not given him either …

As part of his physical preparation for Hogan, Hemsworth has said that “I will have to get more volume than ever, even more than I wear for Thor.” Well friend Chris, Hulk Hogan legs was not bad …

And it is that his legs have also attracted the attention of our readers who, after publishing a video of him boxing with his son on our instagram feed, have also been primed with his lower body: “Yes bad, but … what happens to him something in the legs “,” I thought the photo of her legs was a chop, but in the end it is true “or” and the leg by when? “, were some of the comments.

Unfortunately, Hemsworth isn’t the first Hollywood superhero to be pounded by haters. In 2019, Jason Momoa, Aquaman, was accused of having a “daddy’s body” for a photo with a little belly on the beach and no trace of his abs.