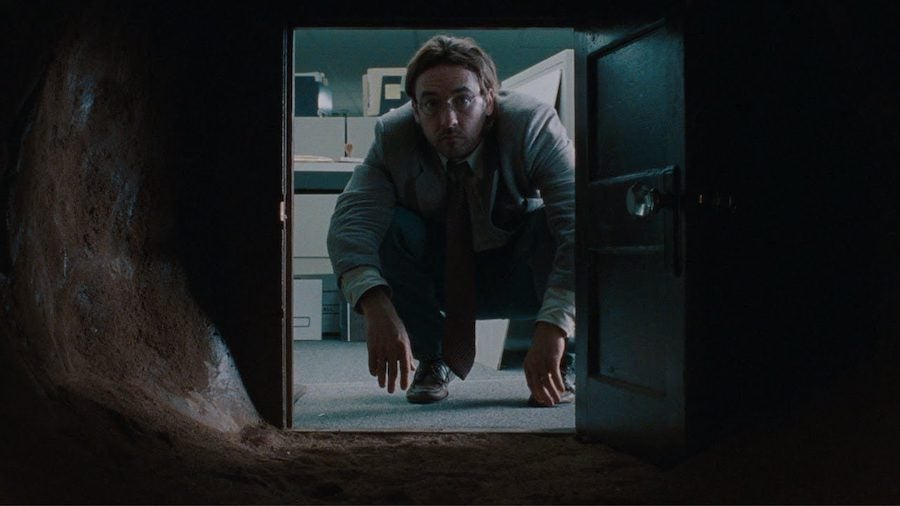 This is the story of the craziest of 90’s feature films. In the skin of John Malkovich, 100% barred story of the intrusion of an improbable love triangle into the mind (and body) of John Malkovitch, therefore. The conductors of this baroque jewel? Charlie Kaufman on the screenplay, Spike Jonze on the director. A bit of a crazy poker game for this duo who made their first steps on the big screen with this film. And immediate consecration of a budding filmmaker, hitherto known for his mastery barred music videos – one of the few personalities in the audiovisual landscape whimsical enough to accept such a project.

The taste of the extravagant

Spike Jonz. If this name is today associated with the excellent Her, it used to refer to a crackpot signature from the music video industry. A sports enthusiast, the videographer began his artistic career as a photographer for the specialized magazine BMX freestinlin‘, before making himself known by the direction of particularly staggered clips. Among his feats of arms, there is in particular the video accompanying the release of the title Buddy Hollyof the Weezer. We see the group offer a retro concert, interspersed with images taken from the hit sitcom Happy Days. The originality of the format is a hit, especially on MTV.

His signature is also behind the music video for da funk dedicated to hit Daft Punk. Don’t ask why the work features a lame man-dog, walking with a ghetto-blaster through New York – only Spike Jonz knows. Another artistic register, new tobacco, with the video of the famous Sabotage Bestie Boyzs, where the members of the group parody the police series of the 1970s. Björk, the Chemical Brothers, Fatboy Slim… Spike Jonz connects the collab ‘. Always with a cracked claw, always successful.

Consecrated as an ace of the music video associated with the very hype MTV chanel over the years, Spike Jonz receives in his hands the script of In the skin of John Malkovich in 1996 by an atypical path (necessarily). Originally thought of by Charlie Kaufman as a film simply focused on “a man who falls in love with a person who is not his wife”, the project (enriched with its exuberant notes) struggles to find a client. The screenwriter knocks to the right, to the left – in vain, no production company risks trying the adventure. Too fancy, not enough mainstream.

In desperation, Charlie Kaufman sends his lines to Francis Ford Coppola in the hope that, in the event that the American giant agrees to produce his film, funds will be released. The director ofApocalypse Now then entrusts the script to his daughter, Sophia Coppola, who was not yet the respected author of a first feature film all in enigma, Virgin Suicides. Probably challenged by the audacity of the scenario, this one then shows it to her spouse Spike Jonz. Bingo. Unsurprisingly he declares himself “enchanted by the originality and the labyrinthine dimension” of the script, and agrees to direct a project which promises to be, perhaps, the most stamped of his career.

It is not easy to sum up a work as disconcerting as In the skin of John Malkovich. Let’s try anyway. Craig Schwartz (John Cusack) is a failed puppeteer. He puts on very, very embarrassing shows in the street and despairs of ever being able to make a living from his art. His partner Lotte (Cameron Diaz) pushes him to find a “real job”. Our master of the puppets then engages as a documentalist in a small company in Manhattan. His life changes when he discovers by chance in his office a strange path leading to the brain of the American actor John Malkovitch (who interprets his own role).

After revealing the existence of this “portal” to Maxine, the woman he fell madly in love with, she convinces him to set up a business. Two hundred dollars for 15 minutes “in the skin” of Malkovitch. This fruitful business takes an unexpected turn, when Maxine discovers an attraction for Lotte… But only when she is in Malkovitch. Delusional? Yes. And it’s not going well. Impossible idylls, open struggle to control Malkovitch, discovery of a way to ensure immortality by passing from body to body… By agreeing to direct this film, it is an understatement to say that Spike Jonz offered himself a playground at the height of his imagination.

For a result acclaimed by the professional world. Prize for best film at the MTV Movies Awards of the year 2000, nomination for the Oscar for best director and best screenplay… As a first attempt for a feature film, we experienced worse reception.

Always op’ to embark on barred adventures, Spike Jonz then co-created in 2000 the series Jackass broadcast on MTV, where he established himself as a star, while continuing his activity as a music video creator. He then returned to the cinema in 2002 with Adaptationsort of following In the skin of John Malkovich based, again, on a screenplay by Charlie Kaufman. Other films will follow. the brilliant Syndedoche, New York, Max and the archmonsters and Her. Since the release of this SF success in 2013, no new directing project has been announced. The fans therefore remain in expectation of a new feature film which they hope, without doubt, even more crazy than In the skin of John Malkovich.

In the skin of John Malkovich, the first frosty (and successful) film test of the no less frosty Spike Jonz