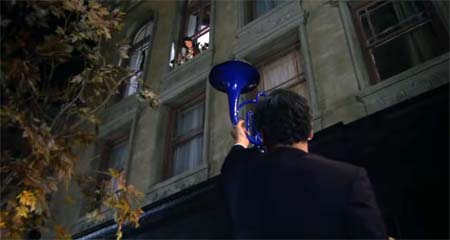 This Sunday, August 7, 2022, TFX will offer eight episodes of season 4 of How I met your mother between 2:15 p.m. and 6 p.m. The American sitcom contains nine seasons, for 208 episodes, broadcast between 2005 and 2014 on CBS. The series is considered by some as the heir to Friends . That said, the end of this American production was highly contested…

As a reminder, the series depicts the life of Ted Mosby (Josh Radnor). The story begins in 2030 where the architect tells his two teenagers how he met their mother. He looks back on the adventures of his life mainly in the 2000s until he met his future wife.

Barney divorces Robin, a new child for Marshall and Lily

The romance begins in 2005 when Marshall (Jason Segel), his best friend, is to marry Lily (Alyson Hannigan). Ted meets Robin (Cobie Smulders), a journalist for whom he has a crush. The architect can count on Barney (Neil Patrick Harris), his friend with multiple conquests to meet people.

After multiple twists and encounters, Ted finally meets the woman of his life in the ninth and final season. The majority of episodes take place over a weekend where Barney and Robin are to get married.

This salvo then has many flashbacks and flashforwards. Thus, Robin and Barney end up separating, but the latter is a dad. That said, he continues to flirt thanks to his “play book”. For his part, Marshall is promoted to judge and Lily is pregnant with a third child.

Regarding the end of the series, two alternate endings were shot regarding Ted. The production chose to keep the one where Ted explains in 2030 that “the mother” died six years ago from an illness. That is why he told the story of his life before meeting his wife to his children.

But the latter understand through his story that he has always been in love with Robin. The series ends with Ted going to Robin’s house, in reference to the first episode of the sitcom, ready to win back the journalist.

This end was contested by fans of the series, notably regretting the death of the mother. Neil Patrick Harris, the interpreter of Barney had defended this final: “It wasn’t necessarily the happy ending that people were expecting. But Carter [Bays, ndlr] and Craig [Thomas, ndlr], who are the authors, producers and creators, had this end in mind for years and gradually brought it about. I’m a big fan of it”.

Neil Patrick Harris added: “Some people hated the ending. To elicit this reaction is, oddly enough, a compliment to the series; they grew up with her and with the characters. They wanted things to turn out a certain way. »

Moreover, in an interview granted to Toutatele, Craig Thomasone of the writers of the series confided: “Since the launch of the series in 2005, the internet has evolved a lot: with the hegemony of social networks and the proliferation of blogs offering reviews episode by episode”.

He asserted: “In fact, we got used to criticism. And they were sometimes very acerbic. But we must not forget that the negative voices are always the ones we hear the most. (…) After all, a little controversy never hurt anyone. It’s good that people are talking about the show. I think we are mature enough and we have a minimum of hindsight to be able to bear it”.

The very last image of How i met your mother

How I met your mother can be found every Sunday afternoon on TFX. In addition, a spin-off of the series entitled How I met your Father with Hilary Duff is available on the Disney+ platform.

How I met your mother (TFX): how does the series end with Barney (Neil Patrick Harris)? The disputed end of the last episode of the series