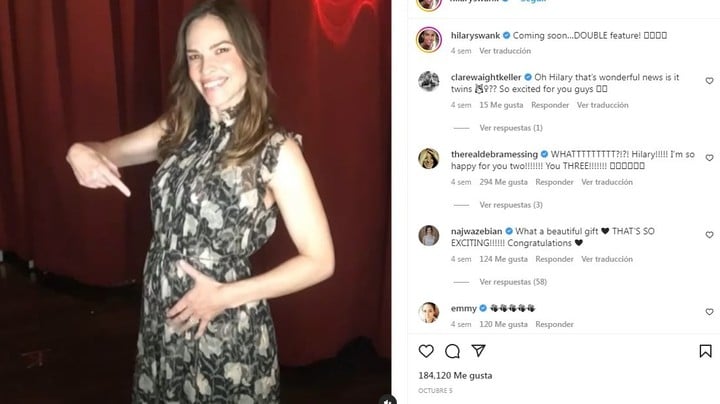 The actress said that she will be a new mother at the age of 48 and received some criticism.

Hillary Swank, The leading actress of Million Dollar Baby, told a month ago that she is pregnant with twins at 48 years old. During an interview on the American television program Good Morning America, the interpreter told the news and said that they will be her first children.

“There is something that I have wanted for a long time and that will be the next thing, and that is that I am going to be a mother”, Swank explained in October in his chat with the program. “And not just one, but two. I can’t believe it”. The two-time Oscar winner – both for Best Leading Actress, for Boys Don’t Cry in 1999 and for Million Dollar Baby in 2004 – also explained that she decided to tell it at the beginning of the second trimester of pregnancy.

But, as happens with celebrities, it did not take long for comments critical of the actress’s motherhood to appear on social networks. They question her decision to give birth to her at almost 50 years old.

The actress, a month ago when she announced her double pregnancy.

“Wow at this age and what you have to have is grandchildren not children”, “you will be like their grandmother”, “you are already too old for this, you will not see them grow up”, “the worst age to have children”, and “for Please don’t have children at this age”.

Despite the criticism, Hilary continues to be happy about her pregnancy, and makes it clear that when it comes to being a mother, age does not matter.

“It is a blessing. It is an absolute miracle. Incredible,” the actress told People magazine. She also explained that both her family and that of her husband, businessman Philip Schneider, have multiple twins. The couple married in August 2018 in California after two years of relationship, in which it was the second marriage for the interpreter, who was married to actor Chad Lowe (Rob Lowe’s brother) for almost a decade, between September 1997 and January 2007.

“Clothes have already started to squeeze me or not fit me, so the other day I had to cut my jeans and put on a jacket,” he said.

Hilary Swank joins a long list of famous women who have children past 45 years. The also actress Chloe Sevigny she had her first child at the age of 45, in 2020. “For me, being a mother from the age of 40 made perfect sense,” she explained in an interview with the newspaper El País.

Cameron Diaz She announced just beginning 2020 that she had been a mother at the age of 47 of a girl named Raddix Madden, although it was never known if she had been pregnant. She also at 47 years old she gave birth Halle Berry and Susan Sarandon. Meanwhile, the singer Janet Jackson gave birth to a boy in January 2017, when she was 50 years old, and in 2019, the actress brigitte nielsen She became a mother at the age of 55.