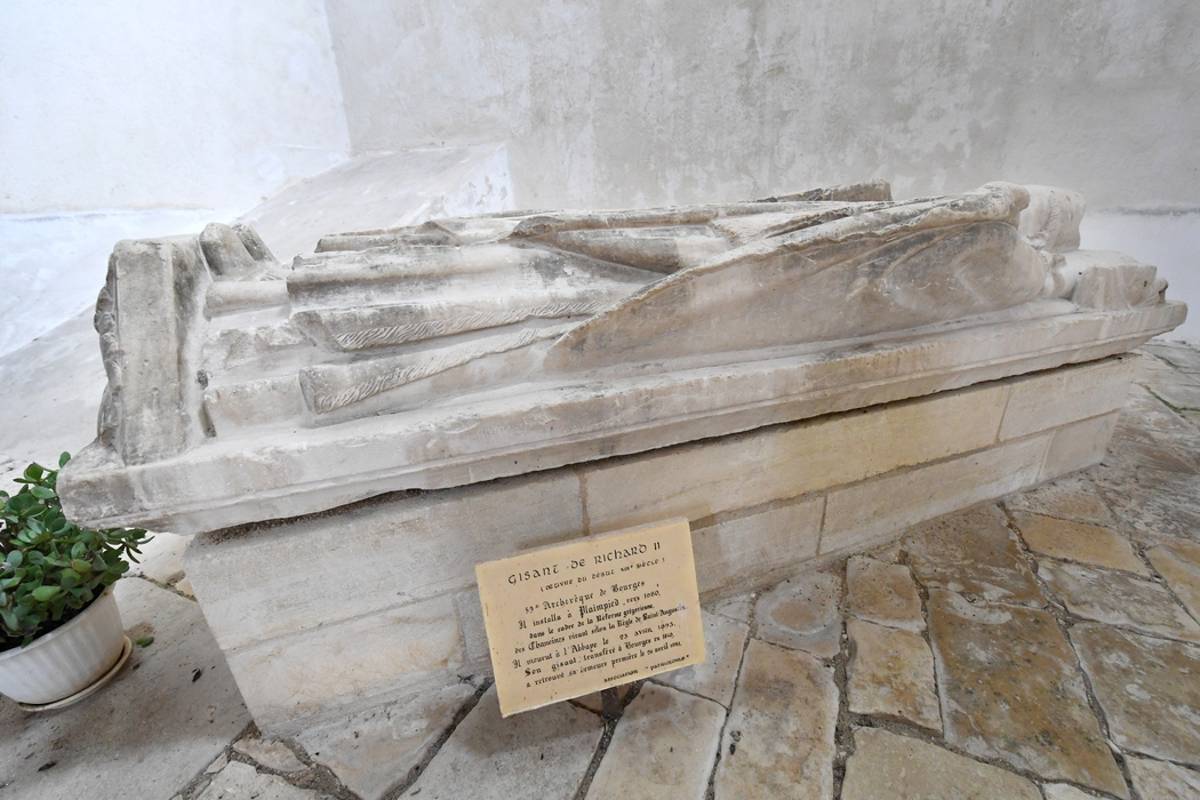 The Saint-Martin de Plaimpied abbey is famous for two of its elements considered to be jewels. It is a mermaid emerging from the water, in the choir, and an aerial Christ in the nave.

But before that, the visitor will be marked by an impressive, vast place, dating from the 12th century, and which was once part of a monastic complex. Very quickly, the eye is drawn, in the choir, by representative and historiated capitals, at the top of immense pillars. They present scenes with enigmatic characters.

A teaching site for members of the clergy

In the choir, therefore, we can see a mermaid emerging from the water, wringing her hair in her hands, in the axis of the apse. A scene that can be interpreted as representing a rebirth.

Richard II, Archbishop of Bourges, had chosen to be buried in the choir in 1093 – photo Pierrick Delobelle

In the nave is a Christ, animated, with bulging eyes, between two devils, “absolutely aerial”, explains guide Anne-Catherine Lardeau. This Christ of Temptation was reproduced at the Palais de Chaillot, in Paris. He also has a twin brother in Nazareth, Palestine.

More generally, the site is beautiful, on the banks of the Auron. It is the closest Romanesque church to Bourges which was a place of training for members of the clergy, uneducated at the time.

The Archbishop of Bourges, Richard II, chose to be buried there in the choir, in 1093, a choir considered “a small intimate gem”. This shows the importance of the abbey at this time.

The abbey is built on a semi-buried and clear crypt, because the ground is sloping. Historians consider that the abbey was built on the site of an old pagan site at the time when Christianizing the region was current.

During the summer, the members of the Bureau des guides de Bourges association organize guided tours. Each of them takes place on Thursdays, from 4 p.m.

the village of Torteron, with Alain Giraud as a guide. Meet at Place du Champ-de-Foire. Thursday July 29:

the church of La Celle and the chapel of Saint-Sylvain, with Anne-Catherine Lardeau for guide. Meet in the church parking lot. The chapel is 1.5 km away by a communal path; provide good shoes. Thursday August 12:

the village of Rosières, the guide being Martine Chavot. Meet at place Léon-Dupuis. Thursday August 19:

the church of Corquoy and the priory of Grandmont, the guide being Brigitte Stievenard. Meet in front of the church. A few hundred meters to walk. Thursday August 26:

the district and the factory of Mazières, in Bourges, the guide being Alain Giraud. Meet on the Pierre-Mendès-France esplanade.

Your leisure newsletter!
Every Friday, find leisure news as well as ideas for outings and activities in your region.