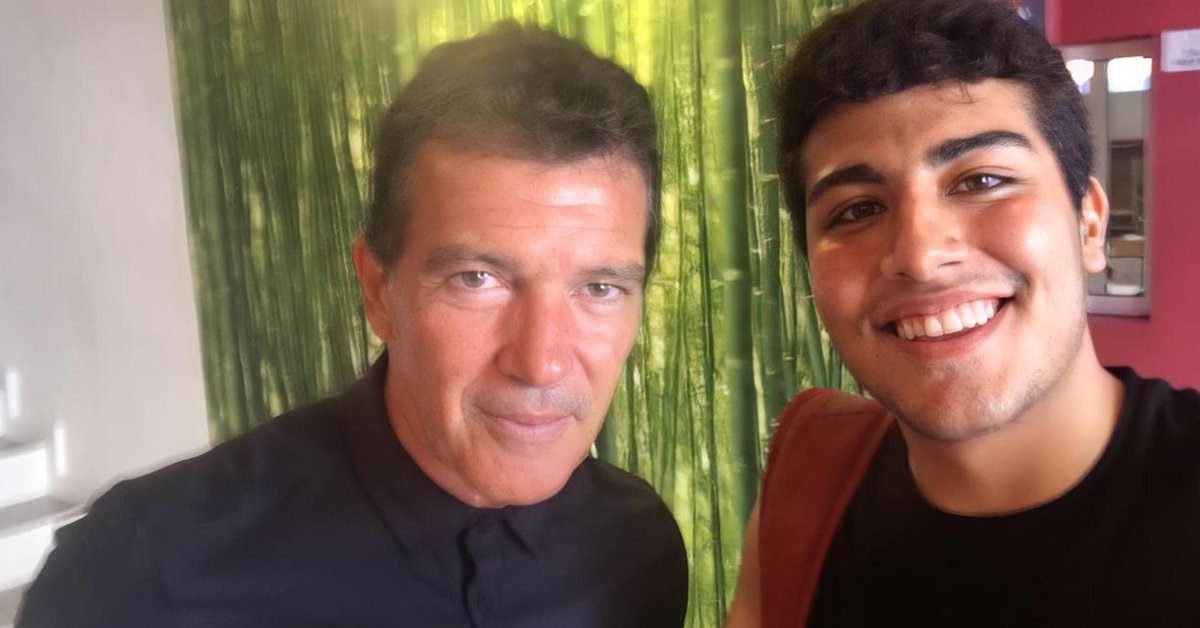 Agustín Asib Akil Uribio (21) was born in Buenos Aires into a family of lawyers, so he decided to study Law for a year and a half, long enough to realize that his true dream was not in the corridors of the Courts: he wanted to be an actor and to succeed outside his country as did the Spaniard, Antonio Banderas, his favorite interpreter since childhood.

His dream was to study in one of the best schools in the world, from where many international stars emerged, but before that, this only son had to confess to his mother, María Luisa Uribio, that he would abandon the university career in which he had enrolled only by family mandate. Far from being angry, she became his ally: she wanted Agustín’s dream to come true.

“If that is what you want, then you are going to study performing arts seriously”her mother told her in June 2019. A few weeks later, They both got on a plane to London, and Agustín began his auditions at the London Academy of Music and Dramatic Art (LAMDA), one of the main British theater schools, chaired by Benedict Cumberbatch and directed by Peter James. Also, attended the Royal Academy of Dramatic Art (RADA), located in Bloomsbury, one of the most renowned institutions in England and the world.

Agustín walks on a red carpet in Malaga, a journey that one day he hopes to be able to take with his mother

But fate made Agustín change course, when he learned that Antonio Banderas -his lifelong idol- was immersed in a project related to the environment and that the castings were going to take place in the institution that the Spanish actor sponsors, the School of Performing Arts of Malaga (ESAEM), directed by Marisa zafra. There, in his beloved homeland, Banderas makes the selections of the artists who will work on its projects and, in addition, through its corridors there is an incessant parade of Spanish and international celebrities.

The institution has a residence for students, where actors, singers and dancers coexist, as happened in the school of the 80s movie, “Fame”. On a daily basis, teachers and students participate in videos with David Bisbal, Vanesa Martin, India Martinez Y Celine dion -among many other celebrities- and also with figures who act in Netflix series, such as the actors of “Toy boy”.

Along with his classmates, where Agustín is the only Argentine

“I arrived in Malaga in September 2019 and I am happy studying here. I have acting, dancing and singing classes for twelve hours a day, even on Saturdays. I start at 9 in the morning and finish at 21. They are four years of study and in September I start my third year. The main Spanish artists also do the castings here -as Alejandro Sanz, Rosalia, Pastora Soler Y David Bisbal- when they look for dancers for their videos ”, Agustín told Infobae.

“The first day I met Antonio Banderas at school, I was scared to death. He was casting to cast a new project, I left my room and sat in the dining room to have lunch. When I looked up, he was sitting across from me. I could not believe it! Within a few days, I was talking to a producer and Antonio came over to say hello, so I introduced myself and told him I was new to the school. He welcomed me very kindly and, since it was Mother’s Day – and mine adores it just as I do – He offered me to record a video for him so that I could send it to him by phone as a gift. It made me feel at home. It was a blessing to have made the decision to come to Malaga, which is beautiful, but above all, I am happy to have come to study here, “he said.

The video that Antonio Banderas filmed for Agustín’s family

“When you see him, your legs shake but, when you meet him, You can’t believe that a Hollywood star is so straightforward, approachable, and humble. The people of Andalusia adore him, because he helps Malaga a lot. Someday I would like to be like him: what Antonio did for Spain, I want to do for Argentina, putting my country at the top and taking him everywhere inside me. In fact, in my room I have an Argentine flag and I am grateful for everything my country gave me. I carry Argentina in my heart because it is my home, I will always represent it in the best way I can. Therefore, Antonio is my example. I never imagined that a Hollywood star was a normal person … He’s a very, very good guy. He gives you advice, he’s very generous and he’s always with us, ”he said.

At school, he became close friends with Antonio Banderas’ nephew, Javier Domínguez, with whom he is currently learning fencing and stage fighting with Alberto Cerrada, the coach of Viggo Mortensen on “The Lord of the rings”, but also, of other figures such as Johnny depp Y Manuel Bandera. For his good performance in that discipline, Agustín won an award.

Although he went to study in London, fate led him to do it at the school sponsored by Antonio Banderas, in Malaga

He could have chosen to rent an apartment near the school, but he preferred to live in the student residence, where He shares the room with three other teammates, one from Almería, another from Gibraltar and the third from Cádiz. He practically does not leave the school since he has everything there: from the laundry to the food. Neither does he have much free time to go for a walk since, once the day is over, he has dinner, studies and goes to bed early to be well rested, warm his voice, do stretching exercises and resist the twelve hours a day in which he has great physical exhaustion, since they teach him all kinds of dances and dances.

“Sundays are my only day off, so I enjoy them and go to the beach. Everything is now open again and the restaurants close at two in the morning. The use of a chinstrap is mandatory, both on the street and at school ”, he assured.

But not everything was simple and, At the beginning of the pandemic, all his illusion seemed to crumble since COVID-19 was causing havoc in Spain, at a time when the dead numbered in the thousands and the cases did not stop growing.

Agustín with his new friend and schoolmate, Javier Domínguez, nephew of Antonio Banderas

“On March 12, 2020, we were told that the school was closing due to the coronavirus. As I was living in the residence, I couldn’t stay, but I was already scheduled to return to Argentina for Easter. Finally, I was unable to travel and I was left alone in an apartment that I rented urgently in Malaga, until on May 25 I was able to return on a repatriated flight. I was very scared, because I was alone in Spain and, at first, almost nothing was known about this virus. I was afraid of getting sick … I didn’t know what to do. I would go out to the street with a chinstrap and gloves, disinfect everything and buy supplies in the supermarket for the month, thus avoiding having to go back. He did not want to go out on the street. In the end, I ended up catching COVID in Argentina and returned to Malaga in January. All that time, I was with online classes, but due to the five-hour time difference with Europe, I had to wake up at 5 in the morning to start the day with the singing class, “he said.

One month ago, was chosen to star in the movie “Intersex”, which will be shot in July 2022, and it’s already in the pre-production stage. The film has great Spanish actors in its cast, under the direction of the prestigious Spanish filmmaker, Tomás Aceituno Maldonado. At just 21 years old, Agustín already knows that next year he will debut on the big screen in Spain.

Agustín with a classmate at one of the breaks

“My dream is to be one of the most important Latino or Spanish-speaking actors in the world. I want to succeed in Hollywood. I am not telling you that it is a dream, because dreams are usually unattainable: I am telling you that it is a goal because, when you work so hard, things come. I want to be like Antonio Banderas, who is a tremendous Spanish-speaking actor and is known everywhere. He makes films in English, but everyone knows that he is Spanish. I want the same for myself, I want people to know that I come from Argentina. But I have yet another goal: to get my mom on the red carpet. Thanks to her and her great effort, I can be here today. If I ever win an award it will not be for me, it will be for her, “he said.

“Before, I was a fan of Antonio and had seen all his movies, but now he is my idol because I know him and see the kind of person he is. I am fulfilling my wish to work with him and also with the most important people in the world of acting, singing and dancing. I am the only Argentine in the school ”, he assured.

Reviewing the lyrics before a class

Although he misses his family and his country, at the moment he does not plan to return and is committed to developing a professional career between Europe and the United States. In addition, it ensures that enjoy the quality of life that Spain offers you and its cultural richness.

“Malaga is beautiful, culture is breathed everywhere and it has an excellent quality of life. At school, I made a lot of Spanish friends, they are very friendly and help you in everything. I feel like we have the same goal and that if one goes well, we all do well. Some want to be famous and others don’t, but the common denominator is that we want to get to act in the best place in the world, in Hollywood “, stressed.

“Leaving your country is very hard, but it will make you mature a lot. It opens your head, you become more independent and you value what you have, because neither your family nor your affections are here. If someone has a dream, let them go and find it. If it doesn’t come out, it doesn’t matter: the lived experience remains. You never end up losing ”, ended.