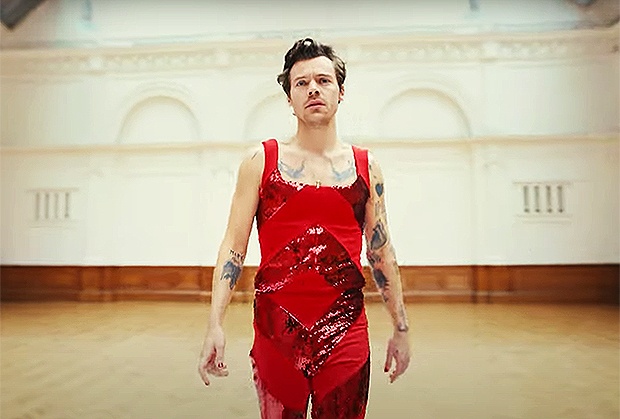 The new era of Harry Styles has arrived, and it still looks fabulous. In ‘As It Was’, Harry’s first single from his new album – and he apparently referenced his girlfriend’s kids!

Harry Styles has arrived to make your 2021. “As It Was”, the first single and video from his upcoming third album, Harry’s house, arrived on March 31 here in the United States, and it gave the year a much-needed boost of energy. Harry, 28, said “nothing was the same” – apparently a pseudonym for the post-COVID-19 world we are now entering. He seemed to refer to his girlfriend Olivia Wildeit’s two children Otis Sudeikis7 and Daisy Josephine Sudeikis5, who fans believe could also have spoken at the top of the track.

“I don’t wanna talk about how it was / Leave America, two kids, follow her / I don’t wanna talk about who does it first,” he sings. The singer enters an art-inspired world with murals and dancing as he spins around a dancer in a blue catsuit, mirroring her ensemble in a matching red sequined version. As he dances outside in public, it seems Harry imagined the other settings we see him in – including shirtless at the pool.

Harry first announced “As It Was” on Monday (March 28) with a trio of images, all taken from behind the “Watermelon Sugar” singer. In the photos, Harry wears a sequined red jumpsuit while stretching, which appears to flex his muscles for movement. Two days later, he shared a ten-second teaser of the music video, propping it up in that red jumpsuit while rolling on a spinner. A catchy drum beat plays before a keyboard kicks in with a little ditty. First impressions lived up to Harry’s course, a touch of the genre with a bit of 80s-inspired flavor. Fans had to wait for the official release – April 1 in Harry’s native UK – to see what the song would bring.

“As It Was” is the first and probably not the last preview of Harry’s house fans will receive before the album arrives on May 20. Harry announced his third album in late March with a teaser that showed him walking onto the stage of a theater while wearing baggy jeans and a white blouse – the same outfit he wears on the Harry’s house blanket. With a silent smile towards the camera, Harry stands tall as the titular house rises around him, perhaps paying homage to Buster Keaton and how a house collapsed on the silent film star in 1928 Steamboat Bill, Jr.

The name of the album is an unintended (?) homage to Joni Mitchell. Harry’s album shares its title with Joni’s song, “Harry’s House / Centerpiece”, from his 1975 album, The whistle of summer lawns. Harry has proven he’s a fan of Joni, covering his 2020 ‘Big Yellow Taxi’, per Fork. Shortly after Harry announced his third album, Joni’s Twitter account tweeted “Love the track” to the former A direction singer.

Harry’s house will arrive nearly three years after Harry’s second album, Thin line. His second effort was a turning point in his career. While his self-titled solo debut established Harry as an individual artist, with the chart-topping, multi-platinum ‘Sign of the Times’. Thin line saw Harry really find his place in the world of music. It was also a resounding success. In the United States, the album was No. 1 on the Billboard 200 and has since been certified triple platinum by the RIAA. Her biggest single, “Watermelon Sugar,” topped the Billboard Hot 100 and won the Harry Grammy for Best Pop Solo Performance and the Brit Award for Song of the Year.