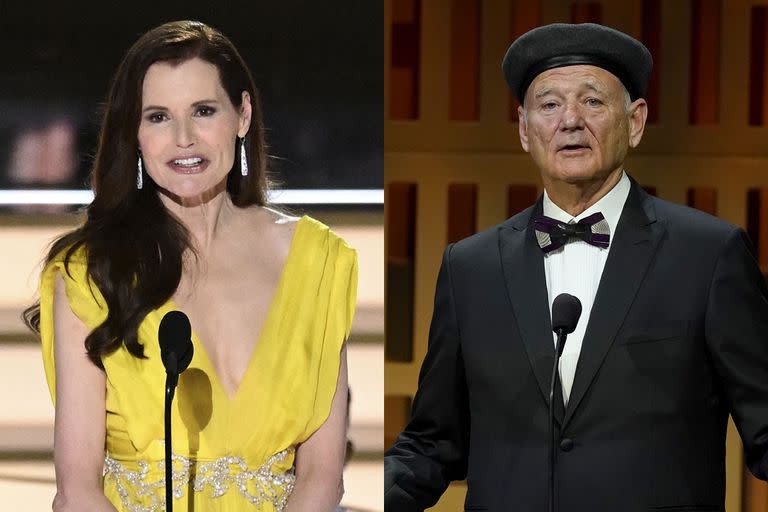 Just as they are fashionable now biopic, In recent years, it has become a trend for celebrities to publish their memoirs recounting situations from their private lives or careers that the public is unaware of. In recent days, who joined this boom was the actress Geena Daviswho has just published his autobiography entitled Dying of Politeness. In it, the protagonist of Thelma & Louise recounted his bad experience on the set with Bill Murray, in a film they shared in the 90s, in a revelation that returns the famous actor to the center of controversy.

It all happened when the actors were starring in the crime comedy I do not have change (1990), film co-directed by Murray and Howard Franklin. According to the actress, her bad experience began in a first and uncomfortable meeting that she had with her partner in a hotel suite and then continued during the filming when he repeatedly yelled at her in front of the entire work team.

“She is introduced to Murray in a hotel suite, where Murray greets her with something called The Thumper, a massage device that he insists on using on her, despite her insistent denial. Later, while they are shooting on location, Murray looks for Davis in her dressing room while she was waiting for her dressing room, and starts yelling at her for being late. She continues to yell at him as she rushes to the set and even when she gets there, in front of hundreds of actors, crew and people passing by, ”summarizes The Times UK while the victim herself confirmed the situation.

“That was bad. The way he behaved at the first meeting… I should have left or defended myself deeply, in which case I wouldn’t have gotten the part. I could have avoided that treatment if I had known how to react or what to do during the audition. But, you know, I was so non-confrontational that I just didn’t do it,” Davis confessed.

As for whether she ever blamed herself for Murray’s behavior, the leading lady of Thelma & Louise warned that she had nothing to do with the violent attitudes of her partner: “Ha. Plus point. There is no point in regretting things, and yet here I was regretting things. And yes, exactly, it wasn’t my fault.”

Davis is not the only actress who has a bad memory of the actor. The actress Lucy Liu revealed in an episode of the podcast Asian Enough Los Angeles Times that Murray insulted her on the set of Charlie’s Angels. “While we’re shooting the scene, Bill starts swearing and I won’t go into the details, but he just kept going and going,” the star said at the time.

Unlike Davis, Lucy did react in the moment: “I wasn’t going to sit there and accept it. So yeah, I stood up for myself and I don’t regret it. Because no matter how low on the totem pole you are or where you come from, there is no need to patronize or put other people down. And I wouldn’t back out, and I shouldn’t have, either,” she confessed.

Years ago, there was also talk of an altercation between the actor and comedian Chevy Chase during the recordings of Saturday night Live in the 70s, when he was taking his first steps in the entertainment industry. In the 1990s, Murray made headlines again for throwing an ashtray at Richard Dreyfuss on the set of What’s up Bob? because they had denied him a day off.

“Bill Murray had a meltdown during What’s up Bob? because I wanted an extra day off, [la productora] Laura [Ziskin] He said no, he ripped his glasses off his face, my father complained about his behavior and Bill Murray threw an ashtray at him,” Dreyfuss’ son said on Twitter. Story that was confirmed by the producer itself in 2003: “Bill threatened to throw me across the parking lot, then he broke my sunglasses and threw them across the parking lot,” Ziskin told the Los Angeles Times.

Without reaching physical violence, Scarlett Johansson also once recalled how difficult it was for her to film lost in tokyo alongside Murray. “It was difficult; It was a difficult shoot for me… I felt a bit out of the loop. I was 17 when I did that movie, you know,” she admitted a while ago. When she was asked why she had felt that way, the actress herself mentioned that a big reason was Murray’s eccentric personality, who had a lot of energy and was prone to mood swings. She also said that she felt “a little isolated” because everyone on set idolized Murray so much.

Earlier this year, Murray was once again in the eye of the storm after 20th Century Fox suspended filming for Being Deadly, the feature film by Aziz Ansari that was going to star the actor. Apparently, filming was stopped due to multiple complaints about Murray’s inappropriate behavior, which put the good working environment at risk.

Geena Davis recounted her unpleasant experience on set with Bill Murray: “It was very bad”