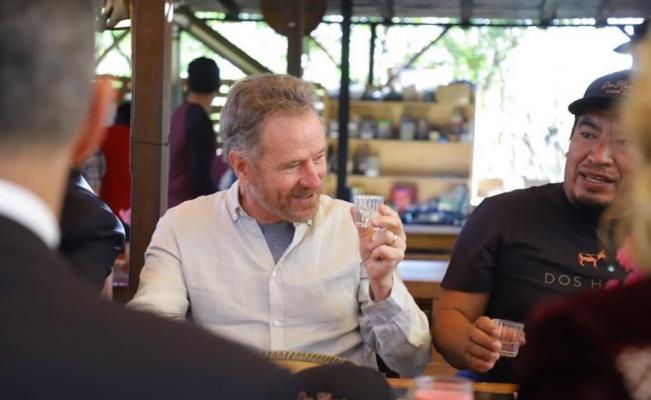 Bryan Cranston, the television icon who gained a following in the early 2000s thanks to his portrayal of Hal on the series Malcolm in the middle and that years later he won the critics with his character Walter White in Breaking Bad, now seeks to conquer the palates of experts with its Mezcal Two Men, a distillate created in Oaxaca.

For this new adventure, Cranston called in his set partner, Aaron Paul. The friendship between the dynamic duo of Breaking Bad It was grown in the locations of this series considered one of the best in history, and which has won 13 Emmys including best drama series in 2014.

On the show Jesse Pinkman, played by Paul, and Walter White, by Cranston, they became the best meth cooks; now in real life they want to be the best ambassadors of the mezcal.

Dos Hombres was a joint effort, both actors undertook the task of touring a large part of the state, until they reached San Luis del Río, in the municipality of Tlacolula de Matamoros in Oaxaca, where they produce their ancestral drink.

“Dos Hombres Espadín Mezcal is an open invitation to discover and delight in the richness that arises from the legendary craftsmanship of the best mezcal masters in Oaxaca”, as they describe it on the official page of their product.

His goal was to achieve perfection in aroma, flavor, strength and smoothness. Bryan Cranston himself explained in a post on his social networks that his drink “had to be something very good that even people who don’t like mezcal will like it.”

Dos Hombres has won several awards in international competitions in New York, London and Berlin, and is already on sale through its website and at different points of sale in Mexico and the United States.

Last Wednesday, December 15, the governor of Oaxaca, Alejandro Murat, along with his wife Ivette received Bryan Cranston at a restaurant in San Martín Tilcajete, Central Valles region, where they celebrated the investment that the American actor has made in Oaxaca.

On her TikTok account Ivette Murat shared a video of her with Cranston presenting mezcal. “The best mezcal He’s from Oaxaca and @ Bryan Cranston knows it, ”he wrote in the post.