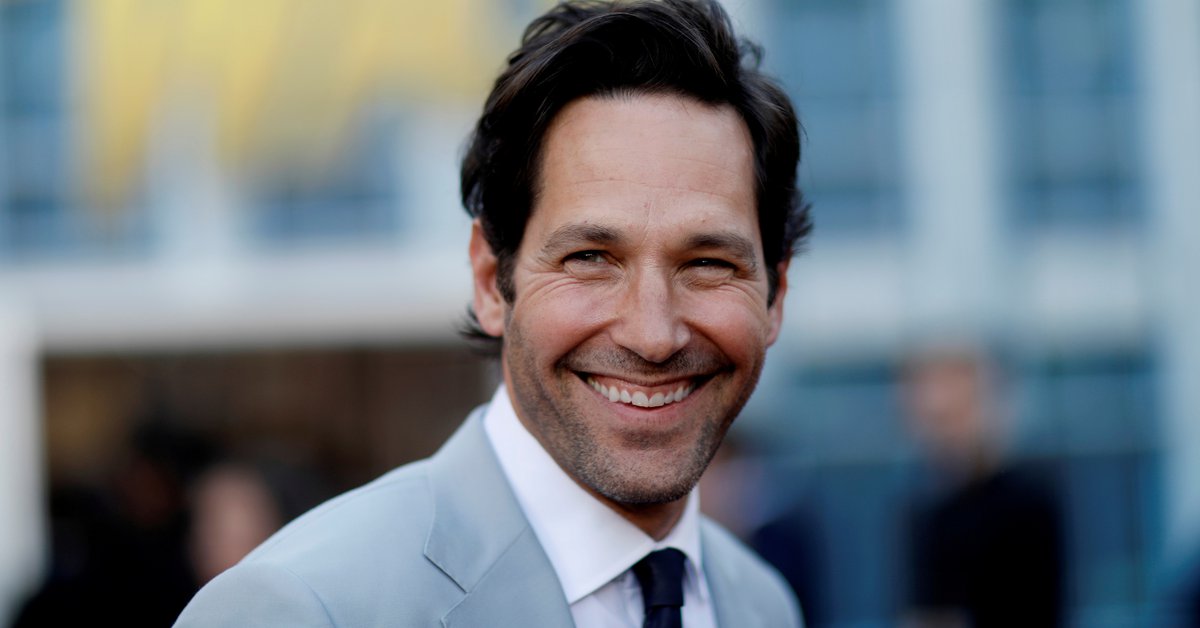 The sexiest man in the world is a family man. He has two children and the same wife for fifteen years. No scandal is known to him. He collaborates with a children’s hospital and an NGO against stuttering. When he knew it was the one chosen for the traditional cover of Sexiest Man Alive of People magazine, Paul Rudd, Ant-Man’s hero said, “Me? Seriously? That?”

Just like his Marvel character, Rudd may be attractive but there is nothing genetic that distinguishes him more than having been a constant worker, like an ant. It could be the neighbor’s son. Of course, a funny and pleasant neighbor who falls sympathetic enough for the public to want him to do well.

The tradition of choosing the most desired man on earth began in 1985 almost by chance. Someone said during a cover production with Mel Gibson, which at that time burst into Hollywood, in full success of the Mad Max saga, “My God! He’s the sexiest guy alive! ” Someone else, with a good journalistic eye, determined that that was the title to use. At 29 years old, an international career that promised to stand out, the handsome bearing and blue eyes to sigh, the actor was a perfect fit with The founding maxim of the recently deceased original People editor Richard Stolley: “Young is better than old. Cute is better ugly. Rich is better than poor. TV is better than music, but music is better than movies. Movies are better than sports, and anything is better than politics. “

No one could know then that, in time, the quintessence of masculine beauty would be transformed into a machine for attacking minorities. Racist, misogynist, violent, homophobic and anti-Semitic, the protagonist of Deadly Weapon and Braveheart today could be named as the most offensive man alive. But in 1985 he was being compared to Steve McQueen, the kind of man who could protect and make people laugh. Just this week it was 41 years since the death of the so-called “King of Cool” and I read dozens of notes about his (tragic) life. In addition to learning that in the animated film Cars – which I almost know by heart because my son was such a fan, that at one time he saw her every day, wearing a helmet, steering wheel in hand, and doing the mimicry – the Ray named after him, and the voice of his teacher, Doc Hudson, is none other than that of his eternal rival, Paul Newman, I understood that they – Newman, McQueen, and also Frank Sinatra with his Rat Pack, from which the actor in The Great Escape (1963) and Bullitt (1968) preferred to step aside after filming When Blood Boils (1959) – were the beginning of a deconstructed masculinity. They were hard-soft: they could be cute, have fun, be fashionable and be the owners of the casino or the races; they were credible in the desert or in the most brutal of the war, but they did not stop being lovable or making a cult of friendship. They were brave males, but tender, who came to run from the scene to the strong and insensitive gallants.

McQueen, like Gibson, had a violent history outside of fiction: his loves were toxic, he himself lived intoxicated with drugs of all kinds, cigarettes and alcohol. But that was another time: it was never denounced. Women who loved him, like Ali McGraw, respect him to this day. They also belonged to another era. On the one hand, because they grew up naturalizing certain “tolerable” levels of aggression; second, because they took care of their part. When the protagonist of Love Story talks today about who her partner was between ’73 and ’78, she usually says that she was not a victim: “It would be very easy for me to show myself as the good girl and for him to be the villain.” And yet, during the five years that the torment of that “tremendous sexual attraction” lasted, McQueen was the type of male who would not stand the test of cancellation: full-time macho, unfaithful, cellopathic, with outbursts of rage. In fact, he almost forced her to give up her career, which, after their separation, was never the same. But, if this 82-year-old woman does not victimize herself, who can tell her that she understands or feels what she lived through better than she does?

McQueen died in 1980, at fifty, and Gibson inaugurated the ritual of choosing the sexiest man in the world only five years later, when he was not yet thirty. In his filmography he also ran with the fate of the King, because –as the editor of the men’s supplement of El País, Guillermo Alonso, writes this week in a column–, “he survived the culture of cancellation” due to a temporary issue; all his public outbursts predated the awakening of the Woke era. When People first named him “sexiest man alive,” his record was still clean. The actor who even played the role of a publicist who understands the female soul with total empathy, in What they want (2000), eleven years ago he recorded a message that went viral on his ex’s answering machine, whose teeth he had broken while holding their baby in his arms. McQueen’s heir took so seriously that “loving is never having to ask for forgiveness” that not only did he shout at the pianist Oksana Grigorieva’s recorder: “You deserved it,” but he managed to synthesize it into a phrase a broad spectrum hate speech, capable of offending anyone: “If you were raped by a pack of blacks, you would deserve it. I’m going there, and I’m going to set fire to the house, but first you’re going to suck it off me “. He defended himself against this and other statements by saying that he had been taken out of context, or that he was so drunk that he did not know what he was saying, and also threatening journalists. But Even so, Gibson did not get canceled, although today I avoid public appearances in a preventive way.

It is a miracle, even, that the award for the sexiest man in the world resists. When in the world all the contests that judged women according to the canons of hegemonic beauty falter or disappeared, the traditional People cover in November is still in the news. As in the case of Vogue and other publications that for years exclusively put those young, rich and beautiful people on the cover from a heteronormative point of view, the one who really fights for their own survival is People themselves. In 36 years since that first cover, The magazine only included men over 50 on its list of winners three times: in 1989, he was a gray-haired Sean Connery -something bald even- and almost 60. In 1992, Nick Nolte, at 50. In 1998, Harrison Ford, at 56. Paul Rudd, 52, is another exception, the fourth. As Alonso points out, on the list, which is long, and includes other figures whose sex appeal today is fading behind dark revelations about their lives – for example, the two-time winner, Johnny Depp (2003 and 2009) -, all they have been straight, cis, and almost always white.

What emerged as a way to promote the movie of the year is also a reflection of the industry. And with the same eagerness to stay afloat as the Academy Awards and most post #MeToo film productions, in recent years, People have sought to make their choice a manifesto. If until 2016 the only sexy African-American according to the publication had been Denzel Washington in 1996, in the last five years the turn was 180 degrees: Dwayne Jonhon, Idris Elba, John Legend y Michael B. Jordan, the hero of Black Panther, they put their face to that historic repair attempt.


Rudd’s choice, when some were waiting the turn of a Latino – and not heterosexual, or is it not obvious that this list cannot be credible if Ricky Martin is not there? – it seems to seek a return to the starting point. Spread his new black comedy with Will Ferrell –The psychiatrist next door, which Apple TV premieres today–, and reconcile its readers (70% are women) with the image of the tender heartthrob that emerges after the Hollywood shake-up (and of the world) against patriarchy. He’s a straight, white, cis man again. In fact, just compare the last cover to the first: thanks to advances in science and photoshop, there isn’t much difference between that young Gibson and this fifty-year-old Rudd. This time, yes, it is as or more important than your attractiveness that you do not have a compromised track record.

A long career until his first leading role: popularity came when he had been married for years. A good neighbor who, when not working, claims to be just “a husband and a father.”

Paul Rudd on the cover of People

Is it wrong for men to be objectified? Women we have been all our lives, and anyway, the implication is never the same. Hegemonic beauty is an effective weapon that opens doors to men and women, the fundamental difference is that, in the same way that Men work the same without having to show certificates of merit or half of the credentials that promotion or a successful career entails for their female or LGTBIQ + colleaguesFor women, not responding to those patterns closes doors. Millions of women around the world feel that their bodies are not attractive enough and this limits them in all aspects of their lives. Depression and anxiety and eating disorders are not seen on the covers of magazines. They are, as the English model Charli Howard defined them: “sexy diseases”. Choosing the most attractive guy is also a wink for these women, that is to say: sometimes they can objectify – and aloud – you too.

In fact, since 2019, People opened voting and new categories (including Sexiest Foreigner). In any case, if there are criticisms, they can say that the decision belongs to the people. The one who chooses, consumes and determines what is sexy. Because we can turn around the issue, end all contests, ban forever the word “beautiful”, but the reification goes from the inside. It is not only changed by the cover of a magazine, but by our own view of others and that of every day in front of the mirror.

Feminist at fault: from Mel Gibson to Paul Rudd, the sexiest man seems to be someone else, but the objectification is on the inside