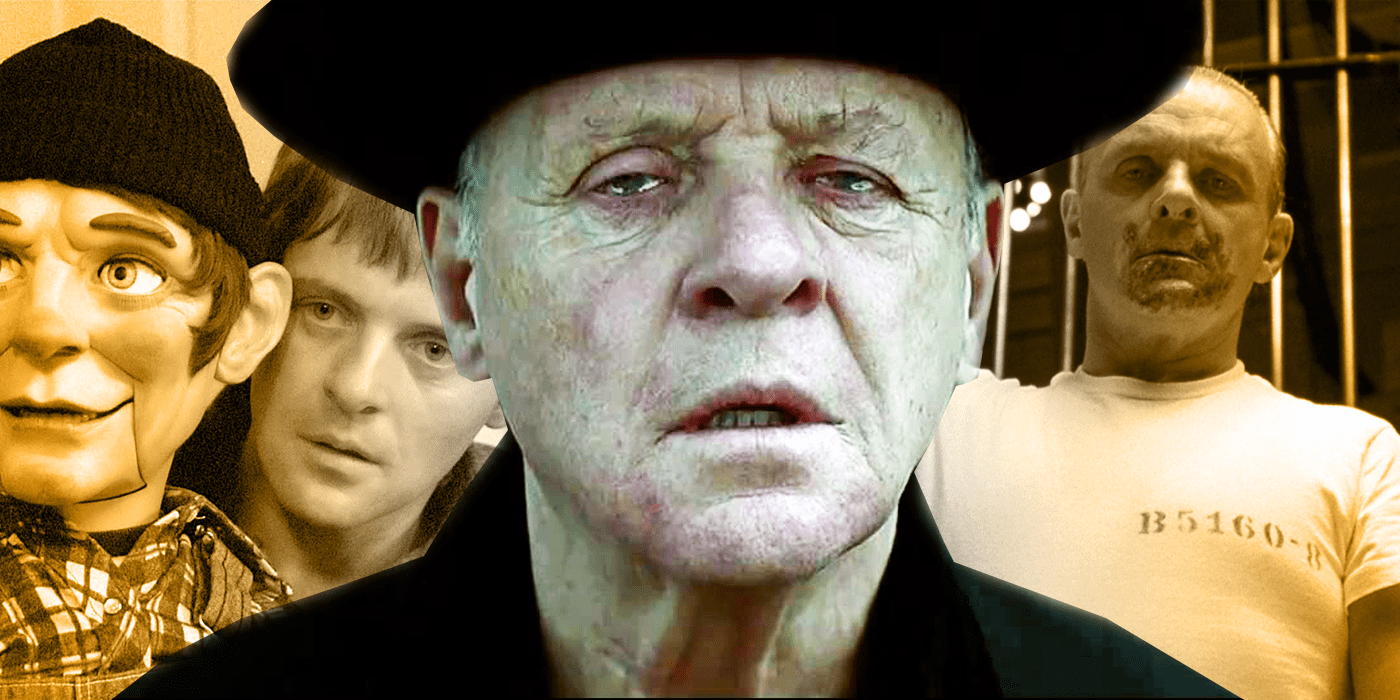 Academy Award-winning actor Anthony Hopkins starred in a wide variety of scary horror films before and after playing the role of Hannibal Lecter. With a record of countless nominations, there’s no denying that Hopkins is one of Hollywood’s most talented actors. The Welsh star is recognized around the world for his milestones in horror, a genre that shows the range of his signature talent and style.

Since the 1960s, Anthony Hopkins’ career has spanned a range of genres, but his early work in horror laid the foundation for his future notoriety. A few main films outside of the horror genre that first brought Hopkins to stardom are The Lion in Winter, A Bridge Too Far, and David Lynch’s The Elephant Man. However, it was when Hopkins accepted the role of Hannibal Lecter in the adaptation of Thomas Harris’s novel The Silence of the Lambs in 1991 that his fame soared. His odd 16 minutes of screen time in the thriller was talented enough to earn him a Best Actor Oscar. Along with other work, such as his role as Odin in the MCU, the Welsh actor continued to play horror roles in the years following The Silence of the Lambs.

The first horror film Anthony Hopkins starred in was the 1977 film Audrey Rose, a supernatural horror based on real events. Upon release, Audrey Rose received mixed reviews, with some critics calling it an overhaul of The Exorcist while others praised it for its excellent narrative setup. It was a perfect entry into Hopkins’ career, as he landed a starring role in the horror feature Magic a year later. Although known for his startling performance as the cannibalistic serial killer Hannibal Lecter, he shone in several other horror films. Here are all of Anthony Hopkins’ horror movies, ranked from worst to best.

The Wolfman is a big budget remake of the hit 1941 film The Wolf Man. The story follows Lawrence (Benicio Del Toro) who investigates the disappearance of his brother at the request of his brother’s fiancée Gwen (Emily Blunt) . When he returns to Blackmoor, his childhood home, he is bitten by a werewolf and destined to turn into one. The Wolfman performed terribly at the box office and failed to break even. While not a terrible movie, the original film sets the bar high in terms of what’s needed for a werewolf thriller. The wolf effects aren’t as scary as they were in the 1941 version. Anthony Hopkins’ performance is one of the few highlights, as he plays an untrustworthy father superbly. The acting techniques he’s used in the past carry over into The Wolfman, and he manages to build suspense with those talented expressions.

A young priest, played by Colin O’Donoghue from Once Upon a Time, decides to go to school to become an exorcist and sets out to convince his superiors to open their minds to psychiatric explanation. In The Rite, Anthony Hopkins plays the priest’s mentor who ends up showing him the truth behind demonic possession. While The Rite did much better at the box office than The Wolfman, this horror film was universally panned by critics for being tedious. The pace is relatively slow for a film advertised as The Exorcist. The dialogue is often convoluted, despite talents like Hopkins dramatizing it enough to make the film entertaining. However, it paints an accurate picture of the Vatican and the inner workings of the church when it comes to studying exorcisms, which makes it surprisingly informative compared to a chilling experience.

Hannibal is the sequel to The Silence of the Lambs in the franchise adapted from Thomas Harris. Anthony Hopkins takes over the role of Lecter without loss of talent since his first interpretation of the psychiatric serial killer. The film follows the journey of Clarice Starling as she investigates Hannibal’s potential whereabouts, but the cannibal effortlessly eludes authorities in Florence, Italy. Jodie Foster’s replacement for Julianne Moore is highly visible, as are most major character redesigns, but she puts on a solid performance when she plays an agent both elated and revolted by Hannibal Lecter. Unfortunately, uneven pacing and a lack of resolution drag Hannibal down, but the horror is as classically atmospheric as its macabre predecessor.

Audrey Rose is a horror film directed by Robert Wise and adapted from the novel of the same name by Frank De Felitta. It centers on an average family living in New York who are approached by a stranger (Anthony Hopkins) and told that their child is a reincarnation of his dead daughter. The colorful 1970s charm of this horror film takes away its narrative flaws, as the cinematography is one of Audrey Rose’s main strengths. Critics’ reviews of the film are mixed, though it’s often praised as philosophically divergent enough from similar classic stories like Rosemary’s Baby or The Exorcist to set it apart. Audrey Rose shows that Anthony Hopkins can exude a perfectly manic side even in his early performances. Hopkins’ remarkable role as a grieving father makes this emotional horror memorable, and the drama probably wouldn’t have inspired sympathy without him.

After Hannibal in 2001, a prequel to Silence of the Lambs was released the following year. Red Dragon revolves around Special Agent Will Graham as he enlists Hannibal Lecter to catch a serial killer called the Great Red Dragon. It received a significantly more positive critical response compared to its predecessor, and manages to bring back the familiar Thomas Harris feel by bringing in Silence of the Lambs screenwriter Ted Tally to write a clever screenplay. However, the heart of the film is the relationship between Graham and Lecter to which Ed Norton and Anthony Hopkins add great nuance. Red Dragon is a solid thriller, but compared to different adaptations like Bryan Fuller’s Manhunter or Hannibal that delve deeper into the characters, it sometimes falls flat. It’s a fun and engaging movie but it doesn’t do justice to the unique gray morality of Harris’ original story.

Magic follows ventriloquist Corky (Anthony Hopkins) who must navigate his social circle and career side by side with his possessive puppet Fats. Many doll movies focus on showcasing a variety of creepy jumps or making the most of a toy’s creepy characteristics, but Magic is original in that it dwells on the psyche of the doll. troubled man who owns the doll. Hopkins delivers a harrowing performance as an individual torn between two worlds. Gene Siskel listed it among his top ten films of the 1978 list, citing that he was engaged in the tension of whether the doll is alive. The magic gets scarier the less it follows convention, with Hopkins’ likable yet disturbing characterization of Corky giving this horror flick the punch it needs.

Francis Ford Coppola’s adaptation of Bram Stoker’s infamous novel Dracula faithfully follows the author’s story. The use of multiple narratives to tell Dracula’s story lends weight to the immense world-building that Coppola achieves with his atmospheric direction. Hopkins plays Abraham Van Helsing, and while he doesn’t play the film’s main antagonist, gives a performance that best matches his snarky filmography. His talent is balanced with other star performers who bring their all to these classic roles, such as Winona Ryder and Gary Oldman. Coppola’s gothic epic Dracula is generally successful, with most flaws involving supporting characters such as Keanu Reeves’ notoriously roped Jonathan Harker.

Jonathan Demme’s magnum opus The Silence of the Lambs centers on rookie agent Clarice Starling who must gather clues from incarcerated cannibal Hannibal Lecter to track down active serial killer Buffalo Bill. This Thomas Harris adaptation became the first horror film to win Best Picture at the Oscars and remains one of the genre’s most transformative films to date. Stellar performances and chemistry from Anthony Hopkins and Jodie Foster elevate this suspenseful work to a masterful degree. Every directing technique works in favor of the fact that The Silence of the Lambs is one of the most intense horror features to ever come to screen, bolstered by the way the tension comes from the dialogue.

While Anthony Hopkins shines in his outstanding work on The Silence of the Lambs, he has rightfully earned recognition for the rest of his filmography. His background in theater and movies adapted from plays has given him a talented edge for drama which he uses effectively in his most suspenseful projects. There’s value in all of Anthony Hopkins’ horror films, leading up to his best film The Silence of the Lambs.