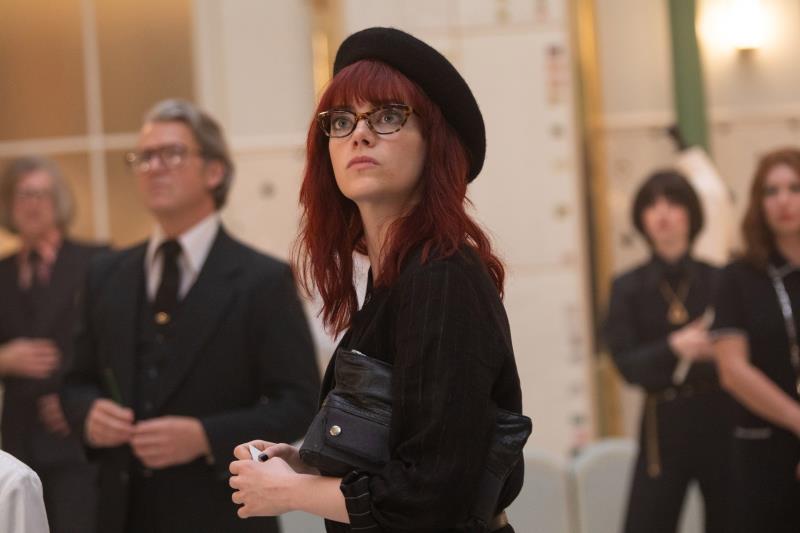 Madrid, May 27 (EFE) .- “Cruella”, the Disney film about the rebellious youth of the villain Cruella de Vil, hits theaters this Friday along with the new Guy Ritchie movie with Jason Statham, “Wake up the fury “, or a drama with Kevin Costner and Diane Lane,” One of us. “

EMMA STONE, CRUELLA DE VIL IN THE LONDON PUNK OF THE 70S

Emma Stone and Emma Thomson compete in evil in “Cruella”, the new Disney feature film that tells the origins of the villain of “101 Dalmatians”, setting the action in London in the 70s in the middle of the punk rock revolution.

Estella (Stone) is an intelligent and creative girl who wants to make a name for herself in the world of design, which reaches the ears of Baroness Von Hellman (Thomson), a fashion legend who will bring out her darker side. Directed by Craig Gillespie (“Me, Tonya”), it opens simultaneously in theaters and on Disney + ‘premium’.

Josh Hartnett and Scott Eastwood round out the cast of this action film about a mysterious guy who joins as a security guard in an armored company hiding his professional soldier skills and his real goal: a settling of accounts.

KEVIN COSTNER AND DIANE LANE ARE “ONE OF US”

Following the loss of their son, retired Sheriff George Blackledge (Kevin Costner) and his wife Margaret (Diane Lane) leave their ranch in Montana to embark on a fight to win back their grandson, trapped by a dangerous family living on the fringes of society in Dakota.

The film, directed by Thomas Bezucha, is based on Larry Watson’s novel “Let Him Go.”

Set in the convulsed Montevideo of 1972, the year that preceded the coup in Uruguay, this film by Rafa Russo has a choral cast made up of Alberto Ammann, Joaquín Furriel, Daniel Grao, Sara Sálamo, Martina Gusman and Maribel Verdú.

Two scriptwriters for a television comedy show struggle to maintain their integrity in the face of pressure to tone down their political satires, while an army lieutenant is pressured to torture opponents and takes refuge in a prostitute.

“MALDITA JUNGLA”, A CRAZY TRIP TO GUYANA WITH CATHERINE DENEUVE

Elliot (Vincent Dedienne), a naive young adventurer, travels to Guyana in search of the mysterious “Otopis”, but soon discovers that they are not “noble savages” as he believed, but jungle gangsters led by the fierce Albertine.

Catherine Deneuve is the protagonist’s castrating mother, who joins the mission, in this French comedy with which directors Hugo Benamozig and David Caviglioli debut.

Slovak filmmaker Ivan Ostrochovský’s second feature film takes place in 1980 at a Czechoslovak seminar. Michal and Juraj are two young theology students who must decide whether to collaborate with the communist regime to avoid problems or defend their convictions, even if that means being subjected to pressure from the secret police.

With a style of film noir from the 40s and 50s, the film had its world premiere at the last Berlinale and won the award for best director at the SEMINCI in Valladolid.

Filmin premieres in theaters this documentary produced by Joaquin Phoenix and directed by Víktor Kossakovsky about life on an animal farm, shot in black and white and without dialogue.

The film, nominated for best documentary at the European Film Awards, proposes a debate around animal welfare and meat consumption.

“ARMUGÁN, THE LAST FINISHER”, A VISUAL POEM ABOUT DEATH

The story takes place in a remote valley of the Aragonese Pyrenees where the legend of Armugán is sung, a being with a mysterious profession who moves through the valleys clinging to the body of Anchel, his faithful servant.

“IT WILL NEVER SNOW AGAIN”, A POLISH FABLE

The Polish couple Malgorzata Szumowska and Michal Englert direct this dreamlike film about a mysterious Ukrainian masseuse (Alec Utgoff) who makes a living offering his services to eccentric residents of a wealthy neighborhood.

His hands seem to have healing and supernatural qualities and with his eyes, the masseur manages to enter the interior of his clients, spiritually empty.

THE MAYAN BEE IS BACK

Maya and Willy embark on a new top-secret adventure, where they find themselves in the care of a sacred orb. When it breaks, Maya and Willy will have to face the biggest responsibility in their lives: taking care of a playful little princess ant.

Co-production of Germany and Australia, this new installment of the Japanese animation saga that triumphed in the 70s and 80s is directed by Noel Cleary, co-director of “Maya the Bee and the Honey Games” (2017).

“GROOVES”, GREATER IN TIMES OF PANDEMIC

The coronavirus acts as a transversal axis to all the stories, a way of telling how the pandemic has affected these people.

“MYSTIFY. BEHIND THE SINGER OF INXS”, IN FILMIN

Filmin premieres this Thursday this documentary about Michael Hutchence, the singer of the Australian band INXS, and his tragic suicide in 1997, when he was just 37 years old.

Directed by Richard Lowenstein, the film focuses on his music and media career, the relationship he had with his lovers (including celebrities such as Kylie Minogue and Helena Christensen) and his tragic end, when his body was found lifeless in a hotel in Sidney.

HOW THE OSLO AGREEMENTS WERE FORWARDED, ON HBO

Based on the play of the same name that addresses how a pair of Norwegian diplomats, played by Ruth Wilson and Andrew Scott, maneuvered outside the official channels to achieve the historic 1993 Oslo Peace Agreement between Israelis and Palestinians.

Steven Spielberg is one of the producers of the film, written by the screenwriter of the original work JT Rodgers and directed by Bartlett Sher.