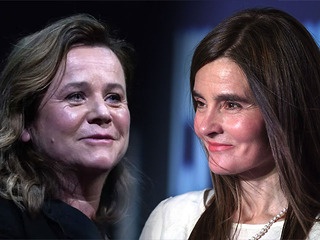 Series Dune: The Sisterhood (HBO Max) will be set 10,000 years before the events of the main saga, to trace the origins of the Bene Gesserit. Emily Watson and Shirley Henderson will play sisters Valya and Tula Harkonnen.

From 2019 and in parallel with the making of the film Dunes by Denis Villeneuve, HBO Max announced the production of Dune: The Sisterhood, a television series inspired by the universe imagined by Frank Hebert. The series intends to explore the creation of the matriarchal order of the Bene Gesserit, millennia before the events of the film.
We know, in the universe of Dunes, the Bene Gesserit is a powerful order notably composed of Reverend Mothers endowed with psychic powers which they use to influence the balance of power in the galaxy, in particular through a vast genetic program aimed at generating the Kwisatz Haderach. Some 10,000 years before the events of the main saga, when the Bene Gesserit was not yet the order we know, a handful of powerful women (notably the Witches of the planet Rossak) were already working in secret to develop psychic powers and laying the foundations of the Rossak Sisterhood – The Sisterhood which gives its title to the series. It is the story of this secret Sisterhood that will lead to the emergence of the Bene Gesserit that the series intends to explore.

The details of the scenario are obviously not revealed, but the main characters of the series should be Valya and Tula Harkonnen, two sisters of the Harkonnen house – distant ancestors of Baron Vladimir Harkonnen. In the universe of DunesValya Harkonnen was one of the disciples of Raquella Berto-Anirul (the first reverend-mother of the Bene Gesserit), and already harbored a fierce hatred against the Atreides, accused of being at the origin of the fall of the Harkonnen house.

And according to Deadlinethe two characters have found their interpreter: Emily Watson (seen in particular in the role of physicist Ulyana Khomyuk in the series Chernobyl) should lend her features to Valya Harkonnen, while Shirley Henderson (Mimi Whining in Harry Potter and the Goblet of Fire) will be her sister Tula Harkonnen.

It is not yet known when Dune: The Sisterhood will air, but the series is produced by HBO Max and studio Legendary Television. Diane Ademu-John (Empire) and Alison Schapker (Lost, Alias) must ensure the writing of the series, alongside in particular Denis Villeneuve (executive producer) and Brian Herbert, the son of Frank Herbert, also producer of the series .

Emily Watson and Shirley Henderson inaugurate the cast of the Dune: The Sisterhood series

'Stranger Things': Photos of Millie Bobby Brown and her boyfriend showing that they are the ideal co...
Tom Hanks grew up in a broken family: he never resented his parents
Predator 4 - Benicio Del Toro soon to be targeted!