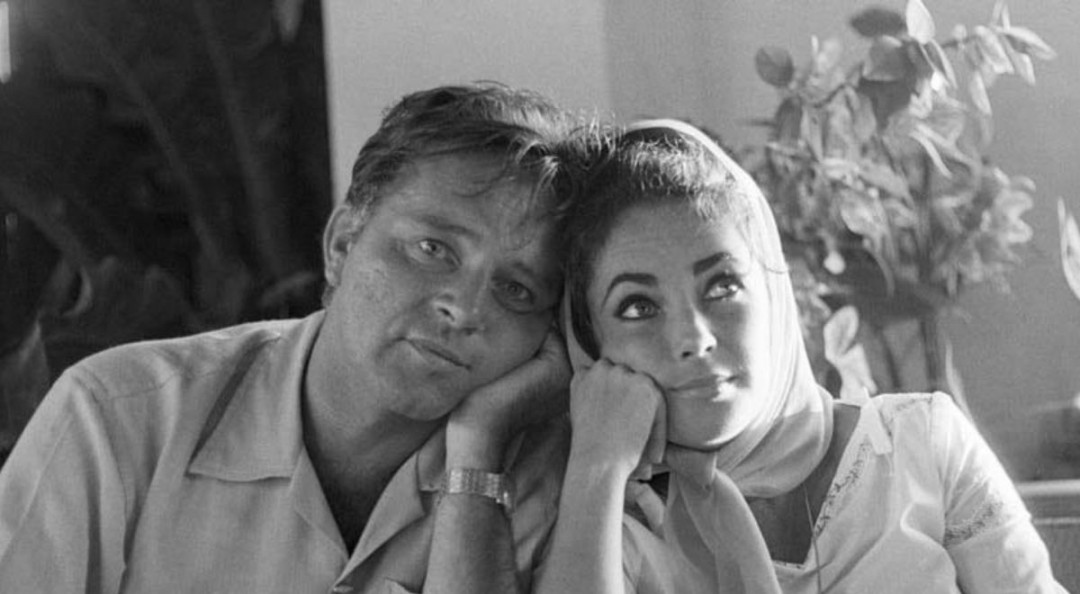 The beginning of the couple’s romance already demonstrated the power of noise and fury. It all started on the set of Cleopatra, where Elizabeth showed supernatural beauty, it was 1962. One morning Richard Burton appeared on the set of the film in Rome with a monumental hangover. Some witnesses commented that he could not even drink from the cup. “I had to help him bring it to his mouth, and that touched me,” Elizabeth would recall of the scene. “I thought, well, it turns out that he is human so vulnerable, sweet, shaky and easy to giggle.” Taylor had already been in four marriages and Burton was famous for seducing his co-stars. 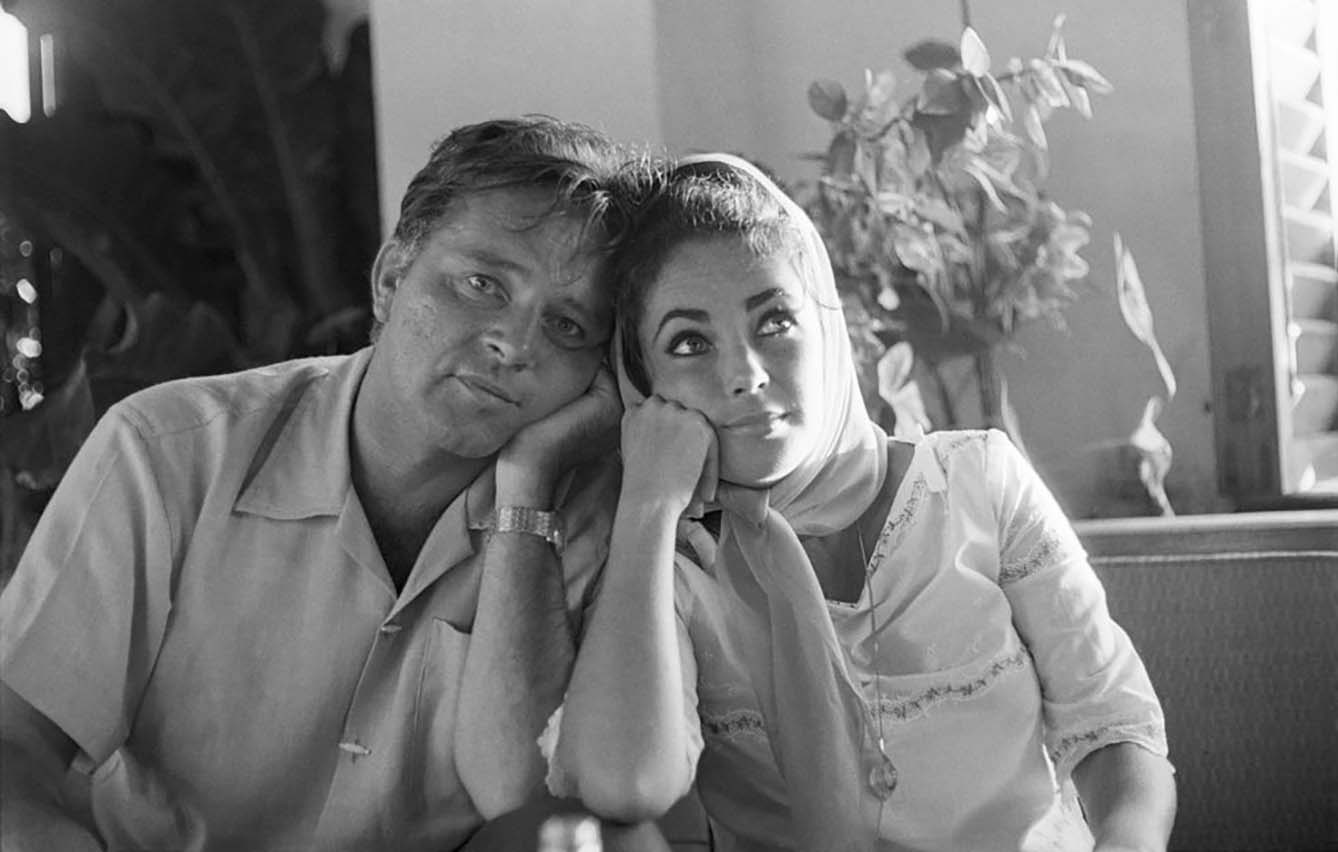 It was not difficult for the spark to emerge, but they were both married and shooting close to the Vatican, which criticized the relationship. The paparrazzi surrounded the actors, it was one of the most expensive productions in Hollywood history. There was a divorce and a romantic wedding in Montreal. Beauty, sex, wealth, scandal and glamor came together. Everyone lived live couples divorce and wedding in Canada.

Richard came from a family of miners in Wales. He had that double aspect of actor, writer, and tough man, warrior and heavy drinker. His wife Sybil Williams seemed to tolerate his freaks on the set, did not think that anyone would be able to unseat her and abandon her and her daughters Kate and Jessica. But Elizabeth’s violet eyes came. The first marriage between Taylor and Burton lasted almost 10 years. 16 months after the divorce, Burton and Taylor remarried in 1975, although this time the couple only lasted until July of the following year. 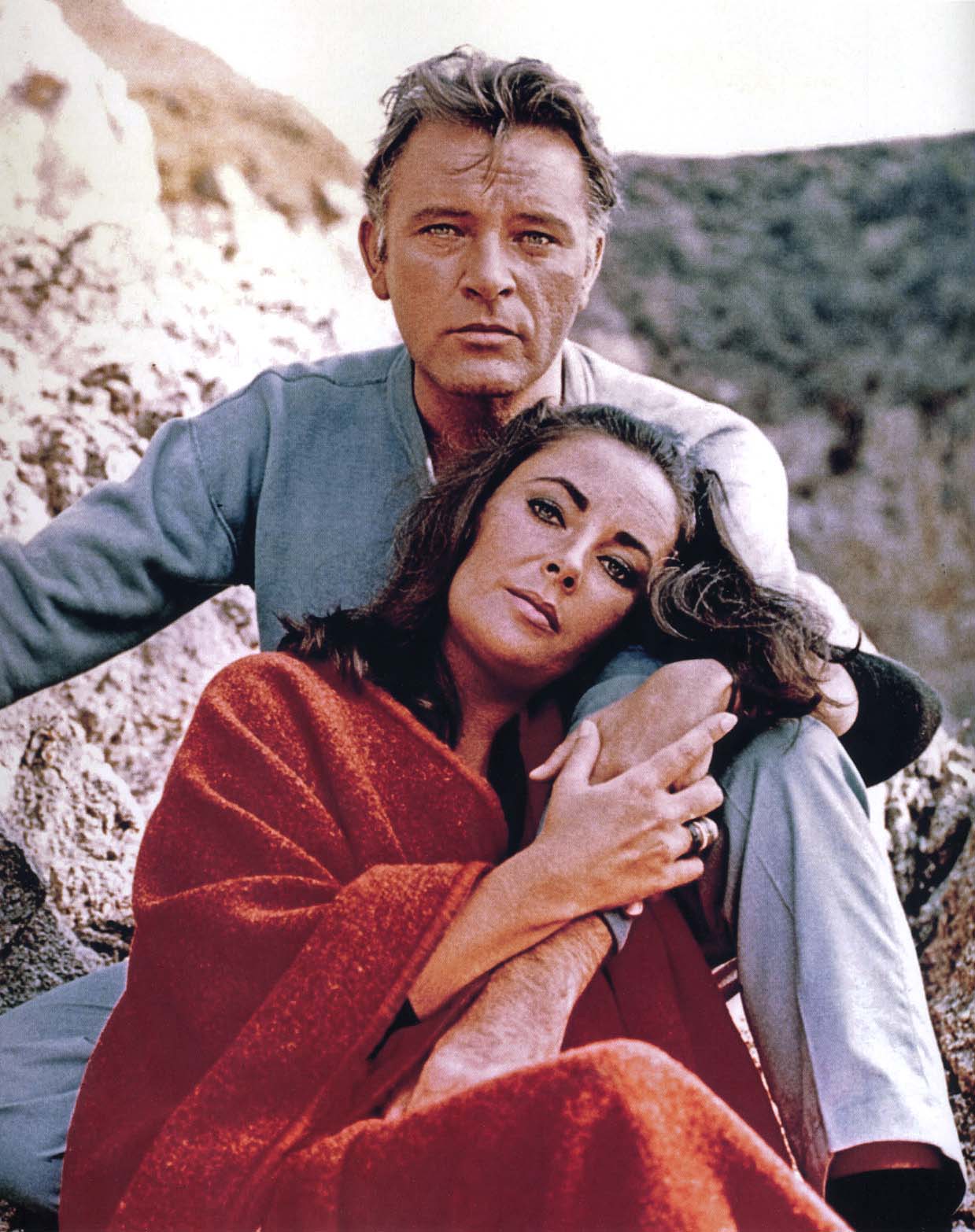 The first wedding in Montreal was private with few guests. She wore a yellow organza dress by designer Irene Sharaff, the creator of Cleopatra’s wardrobe. The look was completed with orange blossoms and lilies and a Bvlgari brooch in diamonds and emeralds. Elizabeth would recall years later that her photo from that wedding was one of her favorites. Richard gave a short statement: from “Elizabeth Burton and I are very happy.”

In the first years of marriage, Elizabeth went into the background and accompanied him on filming such as The Night of the Iguana, in Puerto Vallarta. There they bought a house that today is a romantic temple, the scene of romance is a place of pilgrimage. Taylor acquired the house located at 445 Calle de Zaragoza, in downtown Puerto Vallarta. The house opposite belonged to Richard Burton, so they built the so-called “bridge of love” that connected both buildings and allowed them to be together without having to go outside. Today it is a hotel. 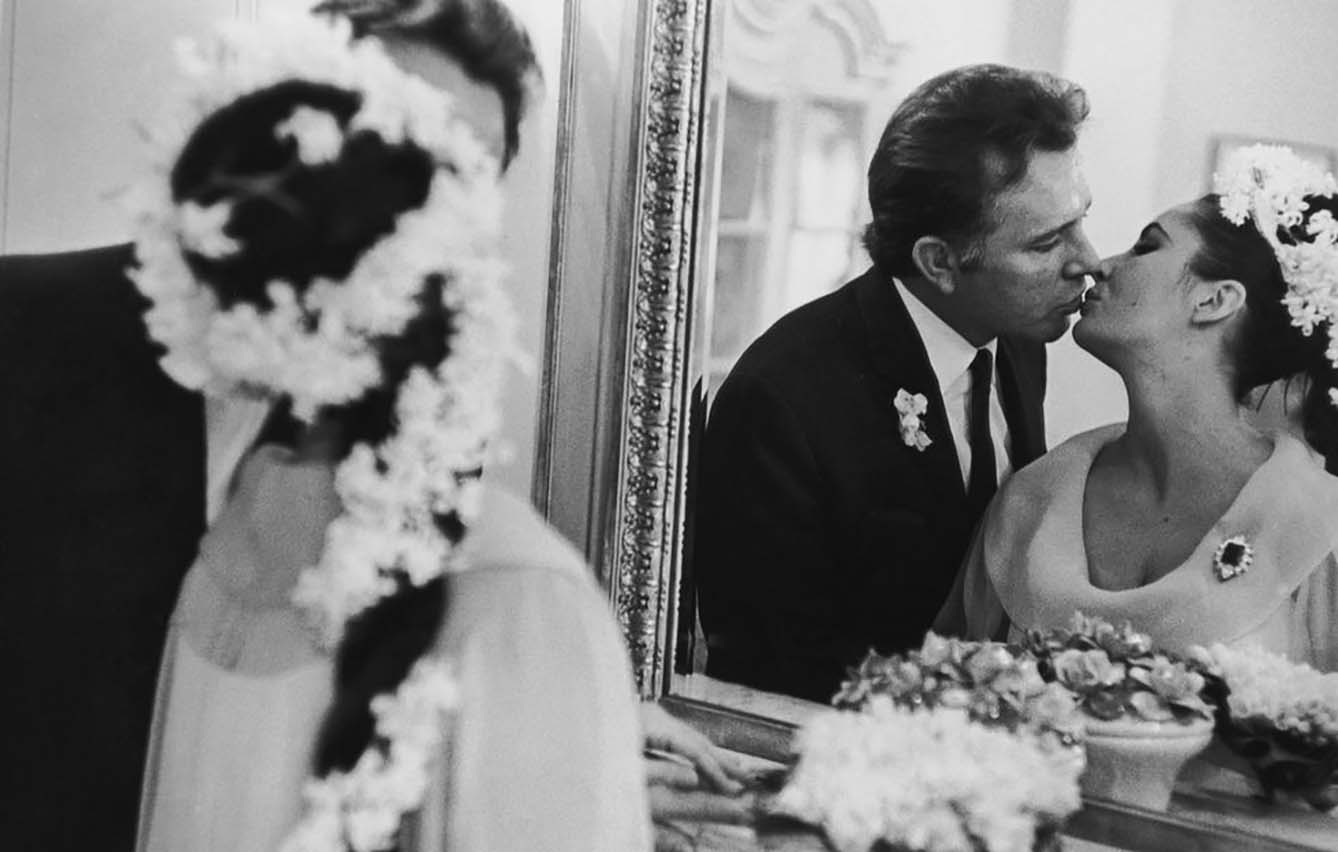 In Mexico they spent glorious and happy days with Ava Gardner, John Huston or Tenesse Williams. At that time Richard confessed his hemophilia, a disease inherited by several of his siblings. A bond began to bind them in a devastating way, alcohol. Their excesses were becoming more evident as well as their relationship problems, they drank from dawn to dusk. In public and in private, large disputes with physical and verbal violence were already noted.

The numerous films they shot together, such as The Indomitable Woman, The Taming of the Shrew, Who’s Afraid of Virginia Woolf ?, which earned Elizabeth her second Oscar. Fiction and reality met on screen and their love was more universal than ever. Days of roses and diamonds, also of alcohol and disputes allowed him to invest thousands of dollars in the Vicky Tiel boutique in Paris, a million in an airplane and according to account in the book Love and Fury, “They acquired paintings by Utrillo, Monet, Picasso, Van Gogh, Renoir, Rouault, Pissarro, Degas, Augustus John and Rembrandt ”. 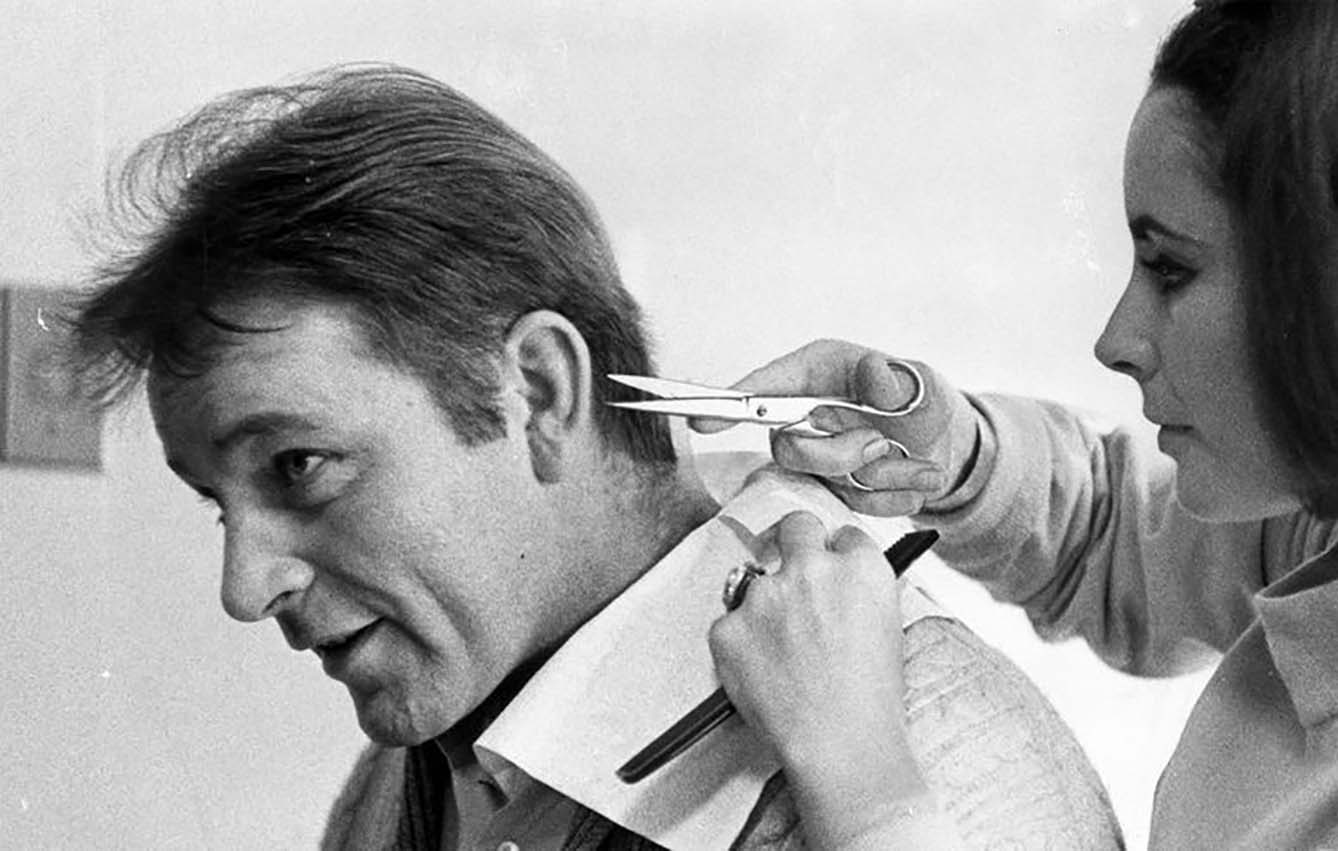 Months later he asked her to marry her again and she agreed, recalled Taylor “We made everyone out of the room, including the children, and we got drunk.” The second wedding took place in October 1975 in the Botswana National Park. They bought a fleet of Rolls-Royces and invested in real estate: 270 hectares in Tenerife to grow bananas and four in the Irish county of Wicklow (where they raised horses), in addition to Casa Kimberly, in Puerto Vallarta in Mexico. They also kept their three houses: Richard’s in Céligny and Hampshire and Elizabeth’s in Gstaad. Their fame was such that there were often scenes of crowds, fans and onlookers pouncing on them. “It could be worse,” commented Elizabeth humorously. “We could be the Beatles.”

After eight years of love and fidelity, Burton had a weakness with a filming actress, Nathalie Delon, Alain Delon’s ex. Conflicts, jealousy, fights, separate cities, “You to Los Angeles, I to New York”, and a few days later she issued a statement on July 4, 1973 in which she affirmed with pain, “Perhaps we have loved each other too much.” . They say that as soon as Richard read it, he went to a doctor for the first time in his life to try to stop drinking. 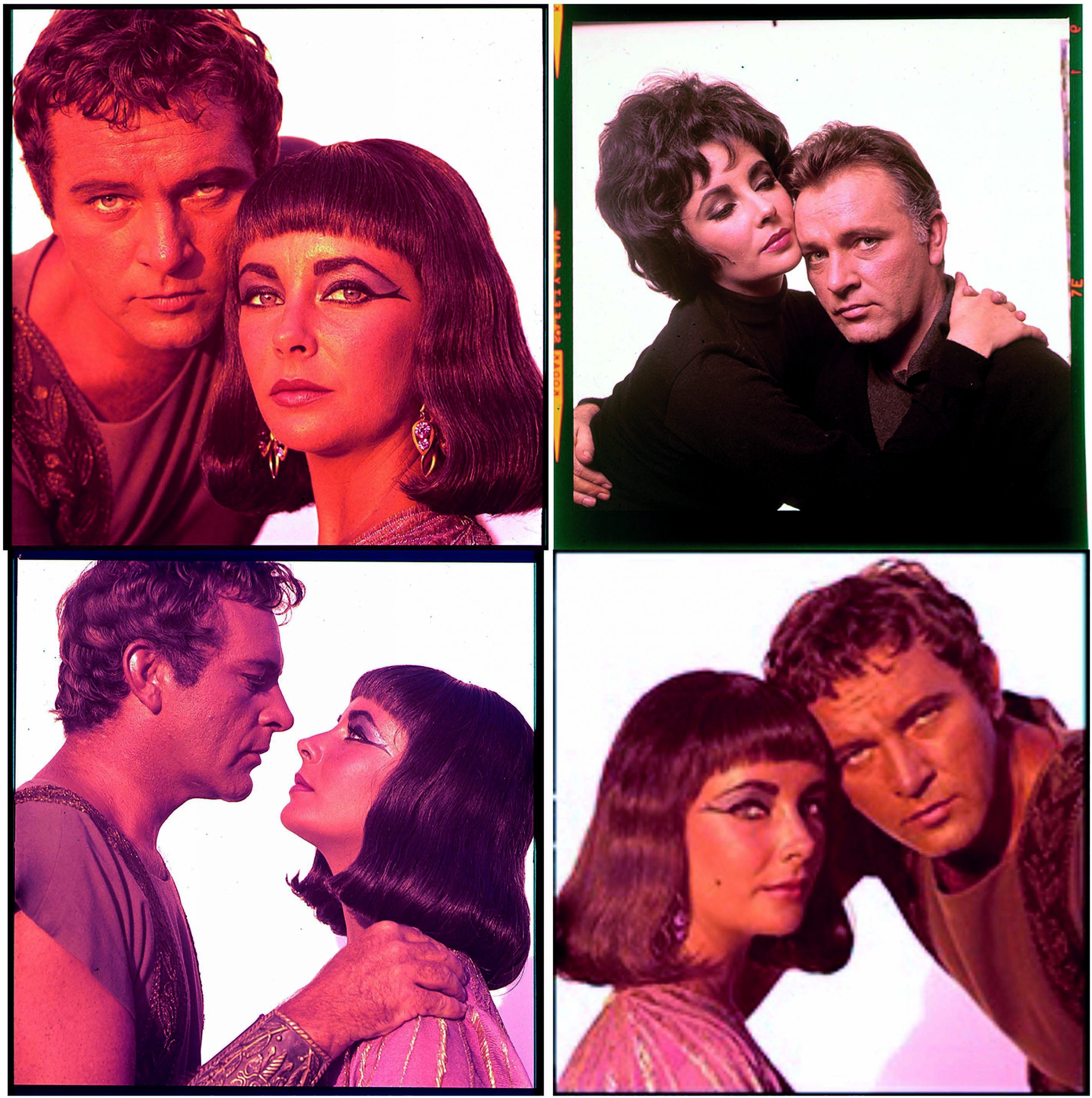 Gina Fratini designed a colorful dress with embroidered feathers and he with a Bond look, turn-down collar and white pants, surrounded by wild nature like his love. Drinking continued in their lives and their love-hate conflicts. This wedding only lasted eight months. When Burton died of a stroke, he avoided going to the funeral, but later Richard’s family organized a funeral that he did attend with the mythical Kurpp diamond. “I would like to tell you about the pure animal pleasure I feel for you”, thus began a letter from Elizabeth Taylor to Richard Burton “You are probably the best actress in the world, which together with your extraordinary beauty makes you unique.” This letter was found on Elizabeth Taylor’s nightstand after her death.