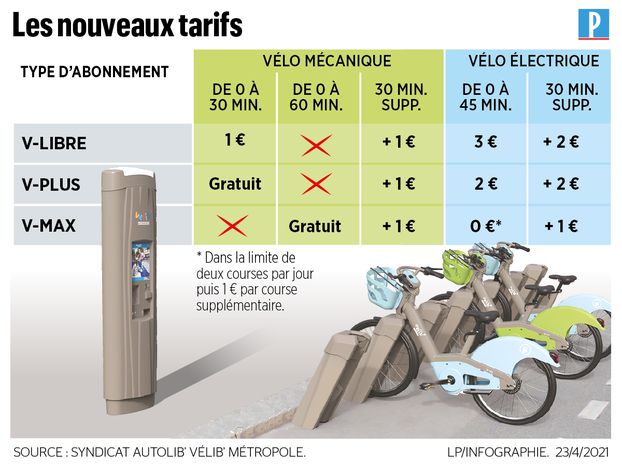 Are you a big “consumer” of electrically assisted Vélib’is? So expect to have to pay a little more for their rental starting this Sunday. The new price list, voted last April by the SAVM – the Autolib’Vélib’Métropole intercommunal syndicate which manages the service operated by the Smovengo company – comes into force on August 1. It was designed to “raise the note” of the biggest users of electric models (the blue ones) and to encourage them to take mechanical models (the green ones) instead.

In detail, the new rental prices will therefore remain unchanged for green bicycles ‚with a first period of free use (except for the V-free subscription without commitment) then a flat rate of € 1 per additional half hour. For Vélib’bleus, on the other hand, the cost of the first period of use (extended to 45 minutes instead of 30 minutes in the previous formula to take into account the expansion of the service now available in Paris and in 56 outlying towns ) goes from 2 to 3 € for the V-free package and from 1 to 2 € for the V-Plus package. The price of the additional half hour (2 € for these two packages) is also doubled compared to the previous grid.

Another major change for V-max subscribers is the Vélib ‘premium package: as before, the first period of use of an electric bike will remain free… but now only for two races per day. At the 3rd, you will have to pay € 1 from the first minute of rental. An assumed policy of penalizing “the biggest riders” in vélib’electric (in particular the deliverers who transform the self-service two-wheelers into “professional” vehicles) intended to avoid “going off the road” of these models victims of their success.

Before the summer, Vélib’ Électriques constituted “only” 35% of the fleet of 19,000 two-wheelers in circulation, but carried out… 50 to 60% of the races recorded. Overused, more stressed than mechanical models, more fragile too, the blue two-wheelers have exploded the maintenance costs of Smovengo. “The objective of the tariff reform is to reduce their share of use to what they represent in the park”, we remind the SAVM where it is specified that 83% of subscribers who make less than 3 trips per day will be little or not affected by the new price list.

Vélib ‘aficionados, long-time subscribers, will not suffer the consequences immediately. The new rates apply from August 1 only for users who took out a subscription after the vote on the tariff reform on April 24. Others will continue to pay the old tariffs (and, for V-Max subscribers, to be able to use e-bikes for free unlimited) until the expiration of their current annual subscription. For the Vélib’electric price increase to apply to all users, it will therefore be necessary to wait until mid-April 2022.

Smovengo, which is due to take delivery of 3,000 new Vélib’ Électriques in September, hopes to be able to improve the reliability of its VAE (electrically assisted bicycles) before that date. If the operator does not wish to comment on the new pricing policy which “depends exclusively on the SAVM”, he notes however that the announced price changes have obviously not scared users away.

The company, which at the end of July had 363,000 subscribers (roughly as many as at the start of the month) continues to record rental records. During the week of July 19 to 25, 178,000 races were carried out each day, despite the weather that should not put a cyclist outside. That same week, 8,100 passes and 8,300 long-term subscriptions were taken out. Since the beginning of the month, the “vélibistes” have covered a total of 2.4 million kilometers. 46% of these trips were made by Vélib’electric.