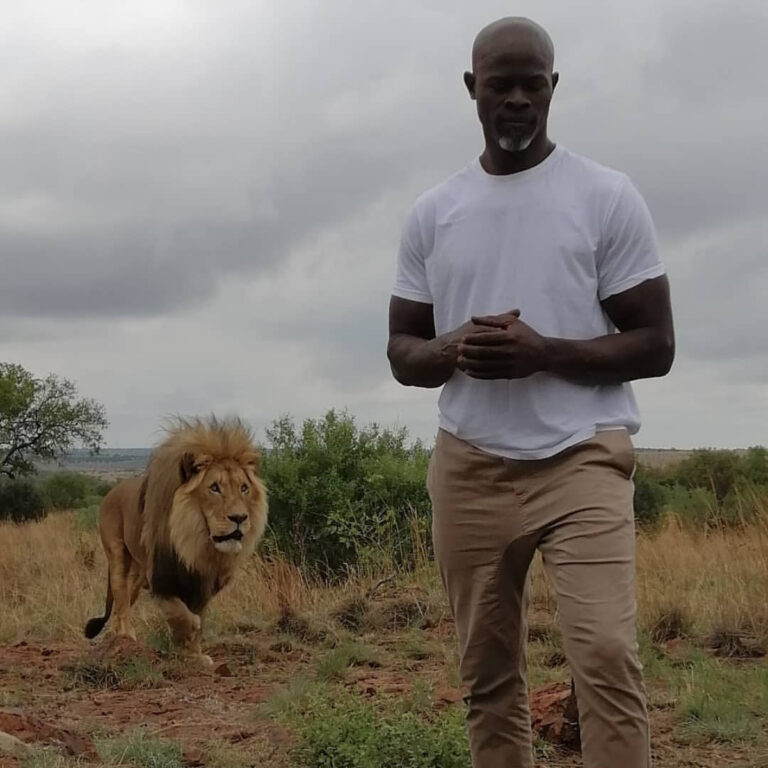 The actor was born in an African country, emigrated to France where he lived on the street without being able to pick up his life until someone discovered him sitting on a bench and changed his life forever.

The actor Djimon Hounsou has a moving and overcoming life story that few know. He started his career as a model, however, he did not have a kind childhood.

Hounsou was born in Benin, a French-speaking African country. At an early age he left his native country to seek opportunities elsewhere, and at 58 years old, he can say that he successfully accomplished his mission.

However, long before he was an Oscar-nominated actor, model, and philanthropist, he had to go through hard times and then reinvent himself into the person he is today.

The actor, who starred in Blood Diamonds alongside Leonardo Dicaprio, is preparing for 2023 with hits like “Shazam! Fury of the Gods”, the film where he once again shows his skills as a chameleon-like actor in any genre, from drama to comedy.

The story of Djimon Hounsou in his childhood was not easy at all. He was born in Cotonou, Benin, a former French colony formerly called Dahomey and located in West Africa.

He lived in that country until he was 13 years old, when he and his brother Edmond emigrated to Lyon, France. Young and hopeful, things did not go as he expected and he started the hard part. “He was just a very torn child, very hurt in many areas, without family support,” he told CNN.

He finished school and for a year the actor’s life was uphill. “I spent a lot of time at night walking the streets of Paris trying to find something to eat,” he mentioned.

He added that “it was no longer legal because I was no longer a student and could not work. So I stayed on the street, I couldn’t walk much because, obviously, if you get caught, noticed or stopped by the police, they deport you immediately.

In a statement delivered to NBC The actor also referred to that stage indicating that “my life in France was one where I rejected the idea that I was a homeless person.”

The also model complemented his statement indicating: “Reject that, I did not see myself that way. I did not look for shelters or facilities that would improve my life as a homeless person, because the year that I lived like this (on the streets), it was an accident, it was not the life that I expected.”

A theme that he even rescued in the movie “Sam Kind of different as me”, where he played a homeless man who lives outdoors near a shelter and becomes a friend of the volunteer couple Ron Hall and Debbie, who offer him love and confidence.

Life was not kind to young Djimon Hounsou, however, his appearance led him to glory and to become who he is today.

A photographer discovered Hounsou in a chance encounter, he was sitting in a park. He walked over and asked if he could take pictures of her, then took them to Thierry Mugler, the fashion designer who would change his life in the ’80s.

From that moment he began his career as a model with only 22 years. She toured the world and modeled for prestigious fashion brands, she consigned Rise up Eight.

In 1990 he had already moved to New York and began his career as an actor participating in the video clip of Don’t Wanna Lose Youthe Tina Turner song.

Then came his work as an actor in the movie “The Friendship”, directed in 1997 by Steven Spielberg, where he played Cinque, that role gave him his first nomination for a “Best Actor in Drama” award at the Golden Globe, since that moment Djimon Hounsou knew that his life would never be the same.

By 2003 he got his first Oscar nomination for “Best Supporting Actor” for his role as Mateo in the film “In America”, which he later repeated with the film “Blood Diamonds”, where he shared a cast with Leonardo Dicaprio.

It was in the middle of the recording of this film when he suffered a dangerous incident. A man threatened him with a gun and it was the Titanic actor who saved his life by putting himself in the middle of the two and calming the assailant, he recorded. The Herald of Mexico.

Djimon Hounsou, looking for the connection with Africa

In each of his projects he always seeks to connect them in some way with the stories of his homeland in Africa, indicating that “my passion is more about bringing the stories of the African continent mixed with the West.”

“You hope that the character has great integrity as a man and that you have a social impact in portraying the character. When you start with something like ‘Friendship’, it’s very difficult not to be socially involved with the problems of the world and with your continent, the continent of Africa. I’m looking for roles like that”, the actor limited to Los Angeles Times.

Djimon Hounsou maintains his roots firmly rooted in Africa, which is reflected, for example, in his being part of various charities and even being an ambassador for the international non-profit organization Orbis Africa, which works to reduce blindness and disability. sight on the continent.

The actor this 2023 will premiere “Shazam! Fury of the Gods”, but he will also participate in“ Rebel Moon ”, the new film by Zack Snyder.

As commented Varietyit is an adventure story where “follows an enigmatic young woman who is given the responsibility of finding warriors who can defend against an impending invasion by the despotic Regent Balisarius” from a peaceful colony on the outskirts of the galaxy.

It is a project that the director developed for “Star Wars”, but that he remodeled after he acquired the Disney rights in 2012.

The film, which is already filming, will be on Netflix and is expected to be a franchise just like it did with “Army of the Dead”, which has a prequel and an anime series.

Djimon Hounsou: the actor conquered Hollywood after living and eating on the street