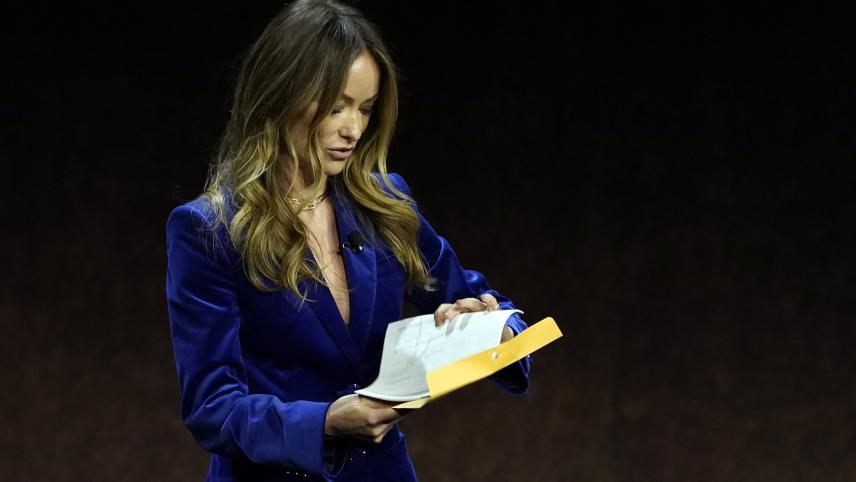 
Olivia Wilde was on stage at CinemaCon in Las Vegas to talk about her upcoming movie Don’t Worry Darling. As she spoke, the 38-year-old actress and director was presented with an envelope by an unknown young woman. The indication “Personal and confidential” was noted on the envelope. Surprised, Oliva Wilde exclaimed: “Is it for me? It looks mysterious. I’m going to open it now, it looks like it’s a script. »

She opened the envelope, discovered its contents and said: “Ok, I understand, thank you. She then continued her presentation, without mentioning the papers received. According to the American press, these are the legal papers concerning the custody of the children that she shares with her ex, Jason Sudeikis.

Back to the story of Olivia Wilde and Jason Sudeikis

Olivia Wilde and Jason Sudeikis met in 2011. They got engaged in 2013 and had two children together: Otis, in 2014, and Daisy, in 2016. In September 2020, Olivia Wilde met Harry Styles on the set of Don ‘t Worry Darling, which she directs and stars in. The two fell in love. She left Jason Sudeikis and publicly came to terms with her relationship with Harry Styles in January 2021.

Two months later, a source close to Jason and Olivia swore that there was no animosity between them and that the children were their priority. Jason Sudeikis explained last July that he was still in shock from his breakup. “I will understand things better in a year. And even better in two years. And then in five years. It was the book of my life, it will become a chapter, and then a paragraph, a line, a word, a scribble. »

According to someone close to Jason Sudeikis, the documents Olivia Wilde received were drafted to clear things up regarding custody of Otis and Daisy. “Mr. Sudeikis didn’t know when the envelope was going to be delivered and he would never have tolerated it being delivered in such an inappropriate way. Jason Sudeikis’ official representative did not comment on the incident. Neither is Olivia Wilde’s.

A family law lawyer not involved in the case, however, told People that Jason Sudeikis had to know how and where the envelope would be delivered. “It is our customers who give us the information to know where and when to deliver the documents. And if you go to that extreme point and do it publicly, in such an embarrassing way, I can’t imagine the client not knowing about it. »

Discomfort at ComicCon in Las Vegas: Olivia Wilde receives a mysterious envelope on stage and breaks down when discovering its contents