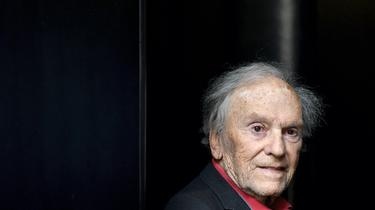 A key figure in French cinema and theater, Jean-Louis Trintignant died this Friday at the age of 91. Many personalities wanted to salute the memory of the one who had known the consecration with “A man and a woman”, and played with the greatest directors of his time.

Jean-Louis Trintignant is no more. The actor of “And God … created woman” and “Love” died “peacefully, of old age, this morning, at his home, in the Gard, surrounded by his loved ones”, announced this Friday, June 17, his wife , Mariane Hoepfner Trintignant.

The sad news has left many admirers, famous or anonymous, in pain, and many of them salute his memory.

The President of the Republic honored “a tremendous artistic talent” who “has accompanied our lives a little through French cinema”. “It’s a page that turns,” added the Head of State, questioned on the sidelines of the Salon Vivatech in Paris, recalling the “soft voice” of the actor with 120 films.

With his wise beauty and his sober acting, his deep voice and his modesty, Jean-Louis Trintignant gave all his roles the depth of an enigma. This immense actor who for decades in theater and cinema carried his nostalgia with him leaves us sad and alone tonight. pic.twitter.com/8eISrnn92W

The actor’s ex-wife, Nadine Trintignant also obviously wanted to pay tribute to him and did so in a heartbreaking way. “He was someone rare, confusing in a good way, a huge actor,” said BFM TV, who confides that she will love him “forever”. “It doesn’t prevent me from always loving Alain Corneau of course, but when you love someone, you love him for life. We are in love, it does not last, but we love forever. Jean-Louis like Alain, they are men that I have loved forever”. “I knew him between his 22 years, 38 years, 40 years, I do not know, it was youth. There were obviously cracks, we lost our two daughters. It’s cracks that we never get rid of, “she added before taking leave of the interview because” too tired “.

“It will remain my most beautiful memory”, reacted on RTL the director Claude Lelouch, who pays tribute to the one who gave him “an overdose of dreams”: “He was the first actor who said yes to me. I shot 7 films with him. He offered me his talent 7 times, he was one of the greatest and he undoubtedly had the most beautiful voice that we have ever heard in the cinema and in the theater.

Jean-Louis Trintignant: “He shared his sufferings with us (…) it’s my most beautiful memory”, pays tribute on RTL Claude Lelouch #RTLSevening https://t.co/oUB66rhVKg

“An essential figure in French cinema, he will have marked many generations and made France shine in the world. I express my condolences to his family and loved ones,” posted Prime Minister Elisabeth Borne.

With sadness, I learned of the death of Jean-Louis Trintignant.

An essential figure in French cinema, he left his mark on many generations and made France shine in the world. I express my deepest condolences to his family and loved ones.

Jack Lang posted a long message on Instagram, hailing a “visionary and avant-garde, lover of poetry, friend of Jean Ferrat, Léo Ferré and Louis Aragon, this humble and elegant spirit will remain in the hearts of generations of French people who followed and loved passionately.

Pierre Lescure bids him farewell with a rose.

The Gaumont studios salute for their part “a huge actor”.

A great actor is leaving us.

Our thoughts to his loved ones.

“He was one of those legendary and rare actors who were very generous and complete,” said Matthieu Kassovitz on CNEWS.

“It is one of the greatest actors in the history of French cinema who leaves us today,” wrote the Cinémathèque on Twitter.

“An actor is a blank page on which we put colors. It’s very humble, the condition of an actor.”

It is one of the greatest actors in the history of French cinema who leaves us today. Jean-Louis Trintignant, a life of theater and cinema, 1930-2022. pic.twitter.com/zVeHr22HQc

He knew “better than anyone to talk to us about Love”, considers Valérie Pécresse.

Jean Louis #Trinting knew better than anyone to talk to us about Love. His finesse of play, the effervescence of his gaze, his inimitable timbre have magnified an extraordinary talent. Farewell artist.

“Immense sorrow at the announcement of the death of Jean-Louis Trintignant, colossus of French (and world) cinema”, posted the writer Mehdi Omaïs.

Immense grief at the announcement of the death of Jean-Louis Trintignant, colossus of French (and world) cinema. Mind-blowing filmography, featuring the biggest names, and at the top of which sits a title that sums up everything we think of him: #Love. pic.twitter.com/W19uoIq12L

For Alexis Corbière, “He will have marked us with many powerful roles, such as his performance in “Z”, a film committed against fascism”.

The immense actor Jean-Louis Trintignant leaves us at 91 years old. He will have marked us with many powerful roles, such as his performance in “Z”, a film committed against fascism.

At this sad hour, how not to think of his daughter Marie, who died under the blows of a violent man. pic.twitter.com/9GvxNqIgjl

“You had such elegance. Such modesty. Such dignity. Thank you Mr Trintignant. Thank you for everything,” writes Tatiana de Rosnay.

You had such elegance. Such modesty. Such dignity. Thank you Mr Trintignant. Thank you for everything. #Trinting pic.twitter.com/o9n2GIrBkB

Dear Jean-Louis Trintignant, your elegance, your beautiful soul, your grace will be sorely missed. Thank you sir #Trinting. Infinite thank you. https://t.co/ilfRaOSOy5