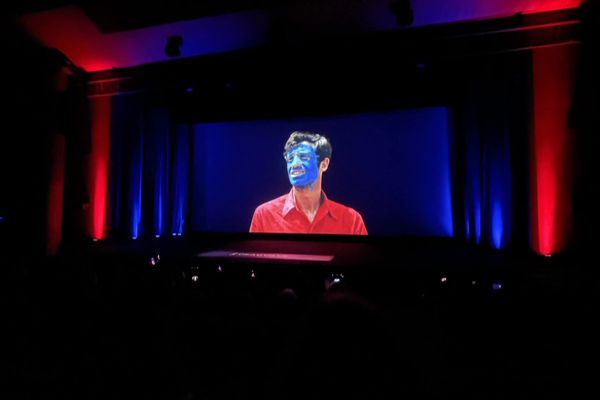 Actor Jean-Paul Belmondo died Monday, September 6, 2021 at his home in Paris at the age of 88. This sacred monster of French cinema had shot three films in Normandy, Le Havre, Villerville and Evreux. The Deauville American Film Festival paid tribute to him.

“You will never be successful in this business with your physique!” This judgment did not prevent Jean-Paul Belmondo, with his banter, from becoming the “Gorgeous” in the hearts of the French and a sacred monster of cinema. The actor passed away on Monday, September 6 at the age of 88, his family announced in a statement, sent to AFP by their lawyer. “He had been very tired for some time. He passed away quietly.”, wrote his family in the press release, sent by Me Michel Godest.

The man we nicknamed Bébel has appeared in 80 films and leaves behind him unforgettable roles. From “Pierrot le fou” To “The Ace of Aces “, the actor with the exceptional charisma had the route of a spoiled child of the cinema, champion of the box office, with some 80 films and 50 years of career. Among this long list, three films had been shot in Normandy: “A monkey in winter”, in 1962, in Villerville (Calvados), “Le Cerveau” (1968), final scene shot in the port of Le Havre (Seine-Maritime) , “Le Voleur” (1966) at the Auberge de la Biche and on the Place Saint-Taurin in Evreux (Eure).

In 1962, it was in Villerville in Calvados that Jean-Paul Belmondo shot “A monkey in Winter” alongside Jean Gabin. Adapted from Antoine Blondin’s novel, based on dialogues by Michel Audiard, we will retain from the film this wink to Norman times: “All the same, I have traveled quite a bit, which allows me to tell you, knowingly, that your hometown is tart as it is not allowed and that the weather is shitty there!”, launched Bébel in a cult replica shot in the café “The Norman cabaret”, which still exists today.

Threatened by the Ministry of Culture for an apology for alcoholism, a box office success in 1962, the film still remains a classic of television reruns today.

In 2014, Jean-Paul Belmondo returned 52 years after the filming of the film in the Lower Normandy town. The actor had made this “pilgrimage” as part of a documentary (produced by his son Paul Belmondo) dedicated to him.

“The Norman cabaret”, a café with a mythical decor that served as the filming location for this cult film, still exists today. When he returned to Villerville in 2014, it was there that he lent himself all smiles to a signing session.

In July 1968, the Joannès Couvert quay in the port of Le Havre was in turmoil. Gérard Oury, the successful director of “The big mop” and you “Corniaud” filmed with Jean-Paul Belmondo “The brain”. A film bringing together French and Hollywood stars: Bourvil, David Niven and Eli Wallach. Two friends decide to mount a heist. They choose to attack the Paris-Brussels train which contains secret NATO funds but another team, called “The brain”, is also on the spot.

The shooting was an event in the port of Le Havre, delayed by the movement of May 68. 1,500 extras had taken part in Gérard Oury’s film. A reporter who covered the event at the time recalls:

It was extraordinary to see all these stars in the port of Le Havre. We went to see them directly, there was no intermediary. Nothing to do with now! And with a warm, friendly and open welcome.

Alain Gerbi, journalist at the ORTF.

The final scene of the film was shot on the Joannès Couvert quay in the port of Le Havre.

This will be the director’s third great success after “La Grande vadrouille” and “Le Corniaud”. It will attract more than 5 million spectators when it is released.

“Le Voleur” by Louis Malle, with scenes shot in Evreux in 1966 at the Auberge de la Biche, which no longer exists, and on the Place Saint-Taurin.

With the death of Bebel, it is a major page of French cinema that is turned. Belmondo leaving after his band of friends from the conservatory, Jean Rochefort, Jean-Pierre Marielle, Bruno Cremer or Claude Rich … In recent years, he had had to bury his accomplices, from Guy Bedos to the best friend, Charles Gérard, with which he never ceased to share laughter and matches at Roland Garros.

The Deauville American Film Festival pays tribute to him

The Deauville Festival paid tribute on Monday evening, during the pre-screening ceremony to Jean-Paul Belmondo. A simple and moving tribute with a photo of the actor and excerpts from “Pierrot le Fou” and “Itinerary of a spoiled child” to the music of the “Professional” of Ennio Morricone.

Villerville also pays tribute to him

The small town of Calvados is in mourning after the death of the actor who had shot in 1962, “a monkey in winter” with Jean Gabin in the village. Anonymous wanted to show him their love by drawing a giant heart on the beach.

On the side of the Brotherhood of the Monkey in Winter created by Jacques Pleux in 2001, the sorrow is immense and the memories numerous.

We had sung the song “Chinese nights, cuddly nights” with him. He had come to see us, he spoke to us a lot, it was wonderful. It’s hard.

Didier Pleux, Pdt of the Brotherhood of the Monkey in winter

Jean-Paul Belmondo came several times to Granville in La Manche when he suffered a serious stroke in August 2021. It was his friend, Michel Drucker, who at the time served as his driver to bring him for the first time in the rehabilitation center.

When he had this stroke, his son asked me to help him. I took it by helicopter to Granville, it was in November and it was raining. When we entered the hall of the center, all the disabled recognized Jean-Paul. When he entered his room, he saw a nurse through the window pushing a disabled person into a chair. He leaned towards me and said “take me back to Paris where I do my last stunt”. He didn’t and he stayed for three months.

Michel Drucker on the set of the newspaper de France 2.

A national tribute will be paid to the actor who died at the age of eighty-eight on November 9 at Les Invalides.