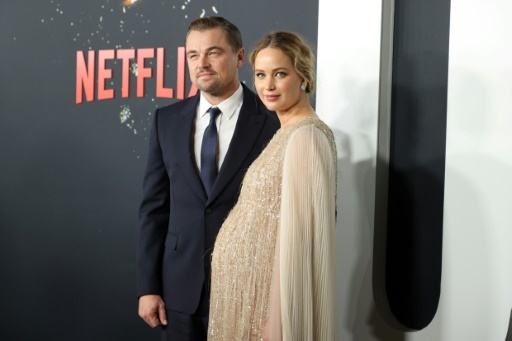 Leonardo DiCaprio and Jennifer Lawrence at the “Don’t Look Up” premiere on December 5, 2021 in New York City Mike Coppola

To give balm to the hearts of scientists confronted with denial: this is the unexpected virtue of the film “Don’t Look Up, cosmic denial”, a comedy in the form of a parable on the end of humanity, on Netflix on December 24th.

In this satirical comedy, a comet threatens to destroy all life on Earth.

Leonardo DiCaprio and Jennifer Lawrence play two obscure astronomers who try in vain to alert a divided American public opinion, in a country ruled by an incompetent president played by Meryl Streep.

The analogy with the climate crisis is on purpose, and the filming of the film, during the pandemic, seems to have made it even more relevant.

“Right now, it’s so hard to focus on the truth, and with the Covid crisis, a new scientific controversy has opened up,” Leonardo DiCaprio said at an online press conference.

“It’s so sad and frustrating to see those who have dedicated their lives to knowing the truth to be put aside because people don’t like it,” added Jennifer Lawrence.

In the film, where Ariana Grande, Cate Blanchett and Mark Rylance also play, the two astronomers in particular struggle to convince an American president obsessed with power, played with jubilation and a good dose of narcissism by Meryl Streep.

The inspiration was not difficult to find: “there are so many directions in which one can draw things, because there are so many grotesque people who invite themselves, shamelessly, into public life” , said the actress. Opposite, “more than ever”, we need “good people”.

“We attended a screening with other scientists in Los Angeles and they were applauding. It was really something to see,” she added. “What I wanted to do was show the frustration of the scientific community,” added Leonardo DiCaprio.

But far from the theoretical course, “Don’t Look Up: Cosmic Denial” is above all a good comedy, also carried by the performance of Jonah Hill, who embodies the odious son and chief of staff of the president.

What would the actor of “Supergrave”, “En Cloque” or “Funny People” do if the end of the world drew near? “I think I would tweet!” He joked: “Share with people my cool thoughts, my opinions on other stuff like movies, the everyday life of stars or their love affairs (… ) And I think in their last moments that’s what people would want to read! “

“I would die posting comments on TikTok,” laughed Jennifer Lawrence.

Sending a strong message but in a fun way was the intention of writer and director Adam McKay, 53, who after comedies had made a remarkable film about the financial crisis (“The Big Short: the heist of the century”, 2015) or former US Vice President Dick Cheney (“Vice”).

“If you can laugh (at climate change), that means you’re putting some distance, and that’s important. You can be aware of the urgency and be sad, while still maintaining a certain sense of humor,” did he declare.

A project that could not but hit the mark with Leonardo DiCaprio, committed for years to the climate.

“I’ve been waiting for a film for decades on the subject, a theme on which everyone is looking for what they can contribute to their stone. Adam really found the way to do it,” said the actor.

“Cosmic denial”: Jennifer Lawrence and Leonardo DiCaprio, balm in the hearts of scientists