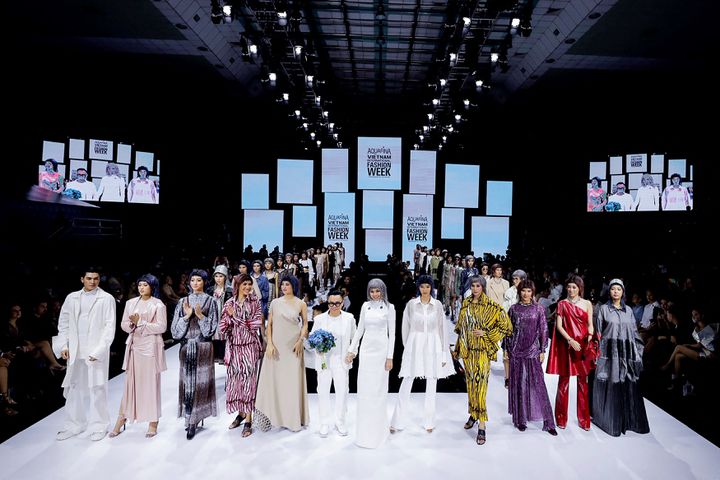 All it took was a poster of singer Rihanna wearing one of her oversized white shirts in a campaign for a luxury brand in 2017 to launch Cong Tri’s international career.

At 43, the Vietnamese fashion designer has since enjoyed incredible success with his clothing lines inspired by popular outfits from his country available in evening dresses in silk, organza or spun taffeta. It employs 150 people and has three stores in Ho Chi Minh City, the economic capital of Vietnam. Its collections are inspired by the uniforms of exclusively female militias from the Vietnam War, urban flower sellers or peasant women working in the rice fields.

Sworn in a reality TV show, Cong Tri has been famous in Vietnam for a long time but when Rihanna fell in love with her Em Hoa collection, “the flower girl”, stars like Beyoncé, Naomi Campbell and Gwen Stefani have also started to choose their creations during red carpets. Katy Perry donned several of her outfits on her 2017 world tour.

After studying industrial art, this native of Danang in the center of the country in a family of 8 children, began his career by illustrating album covers.

Fascinated by the stories of female soldiers told in school and touched by their “strength and resilience”, he launched into fashion with a first collection, “Green leaves” using the technique of patchwork to pay homage to these women with outfits reminiscent of their winter fatigues and their green caps. “At home, they took care of their families, and worked in the rice fields”, he said of the female soldiers. “And on the battlefield, they became real warriors: they were such strong women.”

“In all my collections … the characteristics that make the strength of Vietnamese women are always conveyed or hidden in my design, even in the choice of fabric”, added Tri, behind thick black-rimmed glasses.

In 2016 in Tokyo, Cong Tri presented a collection in “Lanh My A”, a very resistant silk only made in a village in the Mekong River delta and which requires very particular know-how. Once woven, the silk is dyed up to 100 times with a liquid made from mac nua, an ebony-colored fruit that gives it a leather-like appearance. It took the designer two years to put together enough fabric for his collection.

Spotted by Rihanna’s stylist, her creations inspired by “Ao Ba Ba”, the traditional outfits of Vietnamese rice farmers, earned her participation in New York Fashion Week 2019, a first for a Vietnamese designer. Cong Tri’s success abroad could change the image of a country known in the textile industry for its factories which provide little hands for the clothing giants but not yet for its own designers.

Tran Hung, a young fashion designer also based in Ho Chi Minh City, showcased her designs at two recent London Fashion Weeks, while Tran Phuong My made her World Week debut in New York City in 2019. “Making a name for yourself in the global fashion industry is the result of a long process of hard work”, explains Cong Tri, who says he spends 18 hours a day in the office.

However, he spent many years at “try and wish “ grab the attention of global stars in an industry where half of employees of color believe a career in fashion isn’t equally accessible to all, according to a recent report from the Association of American Fashion Designers ( CFDA).

The pandemic may have given the fashion industry a chance to change, some believe, thanks to virtual catwalks that make it easier for designers around the world to come forward. Cong Tri believes, however, that Asian designers must continue to fight to get to the top. “We must always think of which means, which path to take step by step. We must not only wait for society to give us our chance”, he explains.