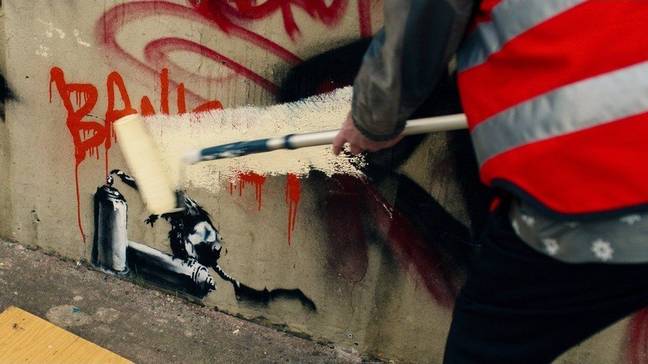 Walken starred in the Stephen Merchant film The outlaws, which is a comedy-drama series about a motley group of misfits doing community service, when he painted on Banksy’s artwork.

In the last episode of the series – apologies if you haven’t seen it yet, but that won’t spoil too much – Walken and other cast members can be seen painting on a graffiti covered wall.

Walken – playing a character called Frank – then came across a stenciled rat standing on top of a spray can signed by Banksy hidden behind a board.

He asked his probation officer if he should cover this too as it is “very good”, but received the response: “Less arguing, more painting”.

Now a BBC spokesperson has confirmed that the painting is in fact a real Banksy.

A statement read: “We can confirm that the artwork at the end of The Outlaws was an original Banksy, and that Christopher Walken painted over this artwork while filming this scene, ultimately destroying it. “

Of course, that’s quite Banksy’s style, and probably the sort of thing he – or them, maybe? – could be right behind.

However, that doesn’t mean they didn’t make an expensive decision there, however.

Banksy’s works, although smeared on walls for the most part around the world, have fetched significant sums at auctions in the past.

His infamous (sort of) performance piece of art titled Love In The Bin sold for £ 16million at auction last month.

This piece was originally intended to be sold as a picture, but as it went on sale it tore through the bottom of the canvas, ruining the original print.

Of course, ruined might not be the word here, given the amount of value that seems to have been added.

In September, another piece painted on the wall of a Suffolk store added € 200,000 to the building’s asking price.

Basically there is a lot of money to scribble on the walls as long as you are Banksy.

Yet having one of your works destroyed by Christopher Walken must be enjoyable, even for a successful artist.

Christopher Walken destroyed a real Banksy for a scene in Outlaws