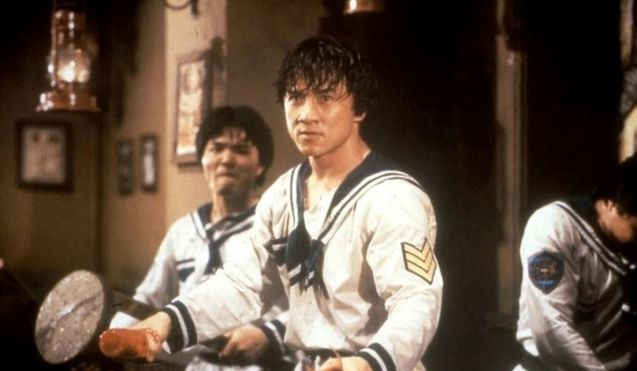 Chinese Sea Sailor has one of the most spectacular stunts in the history of cinema, which reflects all the genius of Jackie Chan’s art.

As theorist André Bazin put it very nicely, the cinema has a “mummy complex”, a power of embalming of an instant T by the camera, giving it an immortal beauty. This existential dizziness can thus be combined with an acute sense of the thrill when witnessing a calculated risk, but also its unforeseen events.

As such, the experimental magic of silent cinema has pushed this logic to its limits. In Freshwater cadet for example, hard not to be both amazed and frightened when a house front collapses on Buster Keaton. The body of the latter, at the heart of a devastating fixed shot, turns out to be at the exact spot where the window frame of the wall falls. This stunt may be perfect, we can not help but think that a margin of error of a few centimeters would have brought this take to a much more disastrous result.

However, if there is indeed an actor / martial artist / filmmaker who has established himself as the ultimate heir to this vision of the seventh art, it’s Jackie Chan. Risking his life for the beauty of entertainment is the credo of a man whose career is filled with demanding action sequences, and jaw-dropping bits of bravery. Nevertheless, in the midst of Chan’s multiple masterpieces (including Drunken Master 2, to which we have also devoted a dossier), Chinese Sea Sailor holds a special place, so much does it condense all the ends of this note of intention.

Released in 1983, Chinese Sea Sailor is a film considered revolutionary in the context of Hong Kong cinema, if only for the choice of its historical context. During the late 19th century ruled by British occupation, the Navy struggled to deal with pirates in the region. And as often in Jackie Chan’s films, his character (Sergeant Dragon Ma) is entirely devoted to the pride of his team, and by extension of his homeland.

But behind the patriotic dimension of the story, the film is above all a highly ambitious project for the productions of the time. Where Jackie Chan himself started his career in cut B series filmed in the countryside, Chinese Sea Sailor reveals impressive resources, especially in the sense of detail of its historical reconstruction. Between its enchanting sets and its various military costumes, the feature film marks a new standard, which will also be very useful for Chan in his other films.

Historical fidelity … but not only

After all, the actor and director always makes the most of his directing tools, especially in his action scenes where his character fights with what he has on hand. Thereby, Chinese Sea Sailor proves to be extremely inventive in the course of his combat sequences. It is enough to look at this generalized fight in a bar between members of the Navy (dressed in white) and the police (dressed in green) to understand how the author manages the contrast and the readability of a scene yet joyfully chaotic.