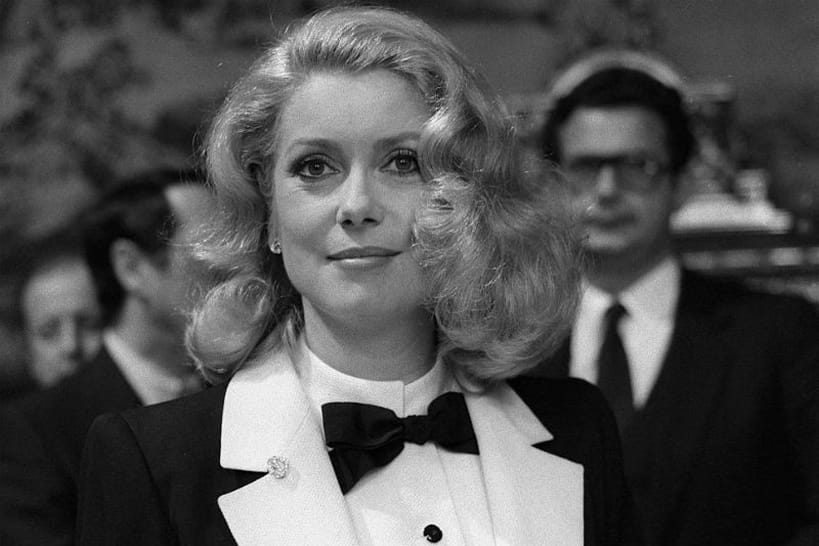 Actress, masterful, dazzling, timeless, in love, Catherine Deneuve, who stars in the documentary “Deneuve, Queen Catherine”, broadcast on April 14 at 9:10 p.m. on France 3, has established herself as the biggest star of cinema. French. Portrait of an authentic and passionate woman a thousand leagues from the coldness and sophistication that we want to stick to her.

“I am not aware of my age (…) let’s say that I try to age as gracefully as possible. On the threshold of my 70s, I feel as audacious as at 20”, had entrusted Catherine Deneuve to Paris Match. Featured in the documentary Deneuve, Queen Catherineairing April 14 at 9:10 p.m. on France 3, the actress is considered throughout the world as one of the most beautiful women and the greatest French actresses. Known for her mythical roles in films magnifying her classic splendor and breathtaking elegance, she remains an icon that never ceases to inspire and fascinate.
Star among stars, cesarean twice (The Last Metro in 1981, Indochina in 1993), nominated for the Oscar for best actress, Catherine Deneuve made the public dream and shot more than a hundred films with the greatest directors (Jacques Demy, Luis Buñuel, Claude Lelouch, Claude Berri, André Téchiné…).

The loves of his life

Woman in love, passionate, she lived with director Roger Vadim (with whom she had a son, Christian, on June 18, 1963), then married photographer David Bailey in 1965 (from whom she separated two years later).

She also shared her life with the director François Truffaut, with the actor Marcello Mastroianni (with whom she had a daughter, Chiara, on May 28, 1972), with businessman Bertrand de Labbey (her agent), and with media man Pierre Lescure in the 1980s…

Johnny Hallyday and Catherine Deneuve were they in a relationship?

Johnny Hallyday and Catherine Deneuve were they in a relationship in their youth? If rumors had been swirling for decades about a secret romance between the sacred monster and the goddess of cinema, neither had ever confirmed. But for Johnny’s biographer, Gilles Lhote, there is no doubt that the two artists fell in love madly during filming The Parisiansby Marc Allegret.

“There are pictures of them, but none compromising or embarrassing. To escape them, she hid between the seats or in the trunk of her cars, they took different planes so as not to arouse suspicion. It is all the more remarkable that Catherine Deneuve is here only woman Johnny protected from the press. She was untouchable“, he explained to the Parisian.

An actress freed from propriety

Catherine Deneuve knows that time is running out, but remains in desire, excess, curiosity. Impetuous, she goes out a lot, goes to bed late and smokes cigarette after cigarette. According to the artist, not having so much need to “appear” is something that compensates for the fact of aging. Not that this fulfilling granny doesn’t care at all about other people’s eyes, but she feels much more free from appearances.

Delighted to be a grandmother, very close to her grandchildren, she considers it “a real gift, a real happiness”. Catherine Deneuve is no longer a prisoner of the shackles of seduction because she has “another projection of his personal and love life”. In the cinema, you have to be in harmony with yourself and have found the balance with reality to accept the reflection captured by the camera.

Blonde icon. After a few appearances as an extra, the actress decided to bleach her hair at the age of 17. A way to stand out from her sister, Françoise Dorléac, brunette like her. In Umbrellas of Cherbourgby Jacques Demy, the blondness of Catherine Deneuve bursts the screen. In Donkey Skin, her sun-sparkling hair. All the girls believe that the actress changed her mane for the love of a man. Its shade stands out as a reference.

Anti diva. Rather than abusing plastic surgery (she denies having had anything redone only to erase a few wrinkles), Catherine puts on make-up and becomes Deneuve, THE woman.

Former muse of L’Oréal anti-aging skincare, Catherine Deneuve loves cosmetics. “Makeup was invented to make women more beautiful. A woman who is not made beautiful by make-up is a badly made-up woman”...admits, lucidly, this icon of beauty. “To put on make-up is to put yourself on stage, it helps to apprehend the character that you are going to interpret”.

Epicurean. Do not count on Catherine Deneuve to talk about diet and draconian diets. What she likes ? Getting together with friends to share a real meal. “It’s so good: We talk. We drink. We even drink a little too much”… For her, “Water is only pleasant when it’s very hot and you’re very thirsty. Otherwise, it’s bland”. And her slender silhouette, then? This fighter watches her line only to “prove that she belongs to his body, while having full power over him”.

If she admits nonchalance, “which can be languorous and seductive”, the lack of energy revolts her. For her, actors are like sportsmen, acrobats, dancers, “they need maximum energy”.

And to recover its vitality, this outdoor woman spends his weekends gardening in the park of his castle near Vernon, in Eure-et-Loir).

Catherine Deneuve, struck by a stroke

Despite everything, the actress had to face a blow in November 2019, when she made a stroke on the set of In his lifetimeby Emmanuelle Bercot. Catherine Deneuve had to be quickly transferred to the hospital, thereby scaring her fans. Fortunately, his entourage quickly clarified that it was a “very limited and therefore reversible ischemic vascular accident“. The actress got away with it without motor deficit and was able to resume shooting the film in July.

It must be said that the legendary actress was well surrounded. She was able to benefit from the support of his ex-companion Pierre Lescureof his little sister Sylvie Dorléacor his daughter Chiara Mastroianni. According to Paris MatchCatherine Deneuve decided to pay more attention to her health and “give up his Vogue cigarettes like his sleepless nights“. Now back on her feet, Catherine Deneuve should also play the role of Bernadette Chirac in a biopic devoted to the former first lady, titled The turtle and directed by Léa Doménach, according to Gala.

But after passing relatively close to death, does the actress apprehend it? “In any case, it’s far from making me happy! But scared, i don’t believe. It’s still something, when I see a face in a photo, very abstract, very unreal. I can’t say I think a lot about death, although I do think a lot about the idea of the extreme precariousness of life“, she told the Point. We wish him a long life!

Catherine Deneuve: Secrets (and PHOTOS) of a free star